A number of localities in China have been publicizing government sales of pork from reserves ahead of the Chinese new year celebration. However, in Guangxi Province price controls have limited the supply. 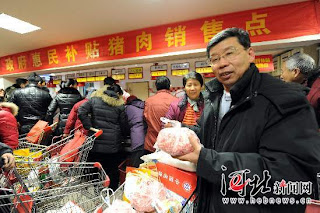 "benefit the people subsidized sale point" in a Shijiazhuang supermarket

The sales in Shijiazhuang were scheduled to take place from January 13 to 17, 40,000 kg per day. The subsidized pork was sold at a 1-yuan per kg less than other pork. Sales took place at four outlets of the Beiguo  supermarket chain and six Carrefour stores in Shijiazhuang.

In Xi'an City, authorities claim to have 3 million kg of pork reserves stored up, as well as 1 million kg of sugar, and 15 million kg of winter and spring vegetables (and 92,000 metric tons of petroleum products) in city reserves.

Why can't the private sector manage supplies to meet the peak demand that happens every year at this time?

An article from Nanning, the capital of Guangxi Province, indicates that price controls instituted last year may have discouraged suppliers from offering enough pork to meet demand in that province. A Mr. Yan went to the market at 10 am to stock up on pork belly meat ahead of the spring festival and found nearly all the 100+ vendors said they were out of pork. When he found several vendors with pork, they all said it had already been ordered by someone else.

A reporter went to the Guangxi market in the morning to investigate and saw none of the vendors had pork for sale at 10:30. But when he went back at 11:10 all the vendors had pork for sale. The reporter learned that the government set a maximum price for pork in the market, and during the peak demand period before the Chinese new year holiday supplies fall short of demand. When asked why pork suddenly appeared on the counters after 11:00, a vendor explained that the government inspectors left by 11:00. After 11, the vendors bring out their pork and sell it at about 20% above the government's published price. When the reporter asked in the market's administrative office, an official said, "The price matter is a government thing; our responsibility is to make sure the market is orderly." 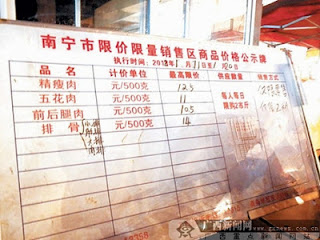 Maximum prices for pork set in a Nanning market. The maximum price for pork belly is set at 11 yuan but vendors sold at 14-15 yuan after government inspectors left the market.

Another article from Nanning explains that Guangxi instituted price control measures on pork last August. Each resident is entitled to buy 1 kg of pork daily at a ceiling price set by the government. Vendors can get a subsidy of 2 yuan per kg sold, up to 150 kg per day (about 2 pigs). Sales above the 150-kg quota are supposed to also be made at the government-set price but with no subsidy. Inspectors are supposed to visit markets one a week at varying times to check receipts. They have caught some vendors selling above the price, mostly to restaurants and food stalls. Three vendors have had their licenses revoked. 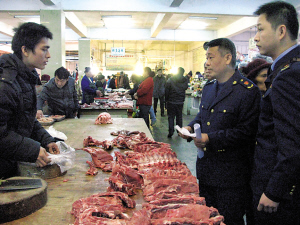 Price inspectors at a market in Nanning

The manager of one slaughterhouse in Nanning said he slaughters 800-900 hogs daily around the new year period, about 20% more than usual. Another slaughterhouse manager said the price normally goes up quite a bit before the new year holiday and there's no problem. However, this year is different, he says, because of the city's price controls--the price is fixed at 21.6 yuan per kg. He said the ex-factory price went down from 27 yuan per kg to 21 yuan when the price controls were put in place last August. Their slaughterhouse took a day off at the beginning of the month but they're back to normal operations now.
Posted by dimsums at 10:11 PM