Want Safe Food? Grow Your Own

Motivated by distrust of the food system, some Chinese city residents are renting garden plots in the countryside to grow their own vegetables or hiring farmers to grow them.

The International Herald Tribune reported on the "Little Donkey City Peoples' Garden" in a village outside Beijing's 6th ring road. The garden is dotted with plots, each with a name, rented out to city people where they can raise their own vegetables.

Ms. Yi, a retired worker, comes to tend her garden twice a week. She pays 1200 yuan to rent a 30-square-meter plot. By my calculation that's 1/22 of a mu and works out to rent of 25,000 yuan per mu. For comparison purposes, farmland in China typically rents for 300-to-1000 yuan per mu, so this is good money for the peasants. 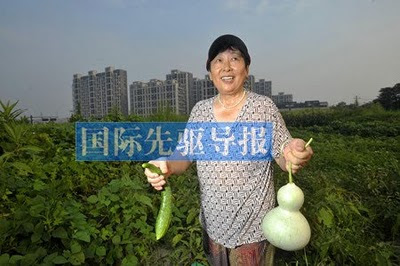 Ms. Yi's motivation is a breakdown of trust in the food system following the series of food safety incidents in recent years. She describes herself as "helpless" when she started growing vegetables.

She says, "I used to work in commerce and I know food distribution methods; it's hard to control pollution."

Planting vegetables "gives her happiness she could never get from the concrete and steel-reinforced city."

In another type of arrangement, city people hire farmers to plant vegetables using organic methods. The reporter cites a group of 20 white collar workers in Beijing's Zhongguancun district who formed a group that jointly purchases vegetables from a farmer on the outskirts of the city. The reporter says there are about 100 such groups nationwide.

These arrangements were inspired by movements in Japan and the United States. The article cites a group of Japanese housewives who set up an arrangement to direct farmers to grow organic produce for them in the 1970s. Another Renmin University professor, Zhou Li, was inspired by the ideas of Michael Pollan and went to the United States to learn about "Community Supported Agriculture" (CSA). The article describes how CSA works in the U.S. and how Renmin University is promoting such arrangements in China.

The Little Donkey Garden project is described as a way of "establishing trust" and "reducing transaction costs."

By my calculation, at current prices Ms. Yi could buy 880 lbs. of cabbage in a Beijing supermarket or 1460 lbs. of cabbage in a street market with the 1200 yuan she pays to rent land in the Little Donkey Garden. Sounds to me like trust is an expensive commodity.
Posted by dimsums at 6:29 PM