A recent article from Heilongjiang Province argued that China's tightening corn S&D balance can be traced to growth in industrial processing of corn in Heilongjiang Province--China's top grain-surplus region. With more corn used to produce alcohol, starch, and sweeteners in Heilongjiang, less corn is available to transport to corn-deficit regions in eastern and southern China.
The analysis pointed to a large national deficit between domestic corn production and use that peaked at -40 mmt in 2017/18 and was projected at -25 mmt in 2020/21. The huge temporary reserve of corn filled this deficit in the last few years, but that stockpile may be fully depleted by September. The balance sheet presented in the article projected 6 mmt of corn imports in 2019/20 and 7 mmt in 2020/21.
Looking backward by adding the balance sheets from a decade-old National Grain and Oils Information Center (NGOIC) report shows that China has flipped from a peak corn surplus of 19.5 mmt during the recession year of 2008/09 and 9.8 mmt during 2009/10 to the current deficit of -25 mmt. This flip in S&D occurred despite a 95-mmt increase in corn output from 2009/10 to 2019/20. According to these balance sheet figures, feed use increased by about 100 mmt over the past decade and industrial use by about 40 mmt.

China's JCI consultancy estimates the country's national corn use will be 303 mmt and corn inventory will drop by 44 mmt during 2020/21. JCI thinks industrial use of corn exceeds 100 mmt. The more conservative Ministry of Agriculture and Rural Affairs (MARA) estimates corn consumption at 288 mmt and a 16-mmt deficit for 2020/21. JCI forecasts China's corn imports will reach 7 mmt in 2019/20 and 12 mmt in 2020/21. MARA--typically conservative in its import forecast--estimates corn imports at 6 mmt in 2019/20 and 5 mmt in 2020/21.
The Heilongjiang report emphasized the declining volume of Heilongjiang corn available to other provinces: from 33.3 mmt in 2016/17 to 13.2 mmt in 2019/20. This results from a decline in output due to weaker subsidies for corn and a big increase in Heilongjiang's industrial processing of corn. The provincial balance sheets estimate that the four northeastern provinces (Heilongjiang, Jilin, Inner Mongolia, and Liaoning) have a surplus of 50.8 mmt. Heilongjiang has always been a top surplus-corn province, but its surplus was just 12 mmt in 2009/10, according to NGOIC estimates from a decade ago. The balance is tight now because other provinces have bigger deficits. For example, Shandong Province had a deficit of -4 mmt in 2009/10 and -15.3 mmt in 2019/20. Shandong--the largest user of corn for industrial processing--previously flipped from corn-surplus to corn-deficit in the early 2000s. 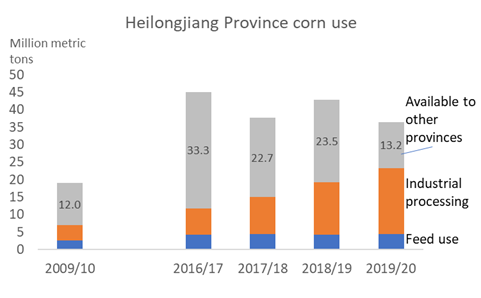 Most of the increase in Heilongjiang's industrial processing in 2020 reflects a surge in alcohol production--probably due to demand for disinfectant during this year's pandemic. Heilongjiang's corn use for alcohol increased by 10.7 mmt to reach 17 mmt in 2019/20, according to the Heilongjiang estimates. The province's starch production used 8.8 mmt of corn, sweeteners used 4 mmt, amino acids 4.2 mmt, and monosodium glutamate 320,000 mt. Feed use of corn in Heilongjiang has been relatively stagnant despite a much-ballyhooed plan to relocate pig production to the corn-rich northeast that was quickly forgotten during the African swine fever epidemic (which began in the northeastern provinces).
The chart above does not take account of the massive volume of Heilongjiang corn that has been disgorged from reserves. Prior to 2016/17, much of Heilongjiang's corn surplus had been sucked up by the "temporary reserve" price support program and stored away in warehouses. At the beginning of 2020, Heilongjiang had over half of the remaining 57 mmt "temporary reserve" stockpile in its warehouses, and the province's corn accounted for 26 of the 48 mmt auctioned from May 28 to August 13. By my calculations, Heilongjiang has 5 of the 9 mmt remaining in the reserve which may be fully depleted by early September if the current 4-mmt-per-week auction pace keeps up. 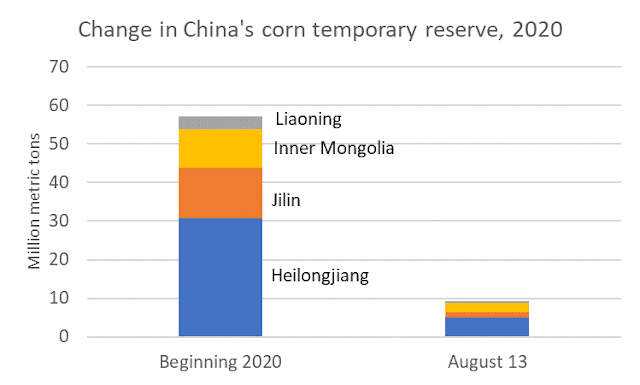 While much attention is on corn imports filling or even exceeding the country's 7.2-mmt tariff rate quota, imports of corn substitutes play an important role in balancing China's corn S&D. The Heilongjiang article estimates that imports of corn, sorghum, barley, cassava, and DDGS combined will total 17 mmt in 2019/20 and 20 mmt in 2020/21. Total imports of feed and starch raw materials will still be less than half the 40-mmt peak reached in 2014/15 and just short of the 23-mmt import total in 2017/18. The flow of corn substitute imports was choked off starting in 2016/17 by antidumping and trade war duties that made room for offloading the Heilongjiang corn stockpile 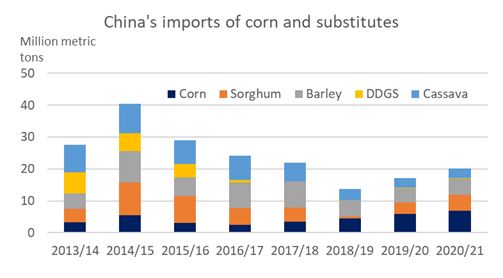 A Futures Daily article this week warned readers that the easing of corn prices in August auctions is a short-term phenomenon that does not change the corn market's supply-demand deficit, estimated at 40-to-60 mmt by this article. Futures Daily anticipated that Chinese corn prices would rise back to levels of 2300 yuan and higher last seen when the temporary reserve put a floor under prices in 2014 and 2015. Futures Daily said the main reason would be the Chinese government's import policy of limiting corn imports to 7.2 mmt, a policy which Futures Daily said shows no sign of change.
Posted by dimsums at 5:41 AM