Nervous Chinese officials reversed course in 2020 by encouraging production of the "early" rice crop that is shunned by consumers due to its poor taste and is grown mainly to pad production statistics. After jettisoning its massive overstocks of cotton and corn, China's next target was to dump massive stocks of rice. Officials had been easing up on policies supporting production of the early rice crop for several years to alleviate the surplus, but food security hysteria somewhere in Beijing's inner sanctum and panic over the novel coronavirus pandemic prompted a reversal of policy in 2020.

"Early" rice is planted in early spring and harvested in summer, followed by a "late" rice crop harvested in late fall--two crops a year on the same field. Most farmers prefer to grow a single rice crop that allows them to maximize their time working in cities, returning only for planting and harvest. Double-cropping rice is labor intensive and unprofitable for farmers who can earn money working off-farm.

Last week, China's National Bureau of Statistics dutifully announced that early rice output was up 3.9 percent from last year, reaching 27.293 million metric tons in 2020. The increase was announced despite catastrophic flooding that hit provinces along the Yangtze River that are the main producers of early rice. Yield was estimated at 5645 kg/ha, down 2.7 percent and the lowest since 2012. The increase in output was achieved by a 6.8-percent increase in area planted to 4.751 million hectares that was engineered by this year's aggressive policy push to expand the crop.

Historical data shows that China has gone through early rice policy cycles since the 1950s: officials boost production when they get nervous about food supplies and let go when there are surpluses. This year's upturn in early rice area is modest in view of the long-run decline. This year's 4.75 million hectares planted is down 60 percent from the peak of 13 million ha in the 1970s. Early rice production is roughly half its peak in the early 1980s. The early rice crop constitutes about 13 percent of China's rice output. 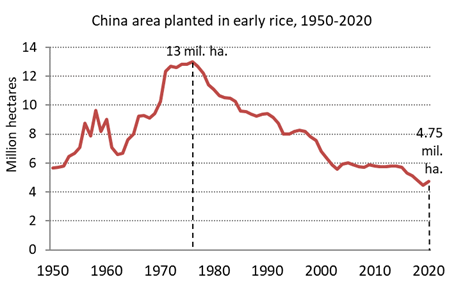 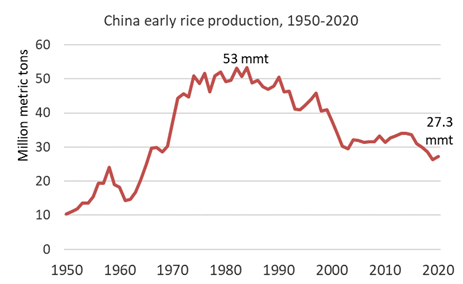 A Statistics Bureau statistician's explanation of the early rice data emphasized that a 7-year decline in early rice planting was reversed by multiple policy measures that motivated farmers to plant more early rice. The statistician used the same phrases used in the May CCTV report. According to the statistician, each level of government bore its "responsibility for food security" by issuing grain subsidies, carrying out the minimum price procurement program, organizing delivery of farm inputs, "going door to door" to guide planting of idle land, expanding use of machinery for ploughing and transplanting, scouting with drones, encouraging coordinated production among farmers, land trusts and other methods for consolidating fields, and disease and pest prevention services. The statistician also cited favorable weather during the early spring when seedlings are grown and transplanted to fields.

Provinces and localities were assigned targets for early rice production, and they added their own subsidies. Hunan Province officials received a "clear policy signal," adopted a policy of leaving no idle land unplanted, and increased early rice subsidies by 200 million yuan. Jiangxi Province allocated 1.56 billion yuan for its early rice production (1217 yuan or $183 per hectare) and surpassed its assigned target of 18 million mu (1.2 million hectares).

Chinese officials plead that their subsidies support poor peasants, but many of the subsidies for early rice are aimed at creating larger-scale commercial farming operations.

The Bureau's statistician blamed this year's decrease in yield on torrential rains that began ahead of the harvest. The Bureau estimates yields based on cuttings taken from sample plots a week or two before harvest. It's possible some plots were flooded when the surveys were scheduled. The statistician said the yield decreased due to the relatively large number of areas where yield was reduced or where no harvest occurred. This ambiguous statement suggests that the rice area lost to flooding was incorporated in its yield calculation instead of reporting a harvested area statistic that is less than its "sown area" statistic. (Once upon a time, the Bureau used to inflate its yield statistics to compensate for underestimated crop area statistics.)

According to China Grain Net, torrential rains during May-June were 50 percent more than usual, and resumption of rains just before the July harvest had a clear impact on the early rice crop. Surveys and investigations indicated that yields were down 10-20 percent in some regions and 30 percent in others. Much grain is unable to meet purchase requirements and the price of early rice is rising, according to China Grain Net. The organization claims to have performed analysis by combining satellite imagery, agricultural weather models, and historical data, but does not report the results. Similarly, China Science and Technology News reports in effusive detail about the combination of satellite imagery, drones and cloud computing to fight the "flood monster" in major rice-growing regions but reveals nothing about flood impacts.

One must keep in mind that the job of Chinese statisticians is to prove the correctness of government policies; measuring what really happened is trumped by this priority. Given the political priority put on increasing rice-planting, the statisticians could not have reported anything other than an increase output. The statistician's explanation of the early rice data concludes that the increase in production lays a foundation for a larger grain harvest and provides a solid guarantee that Xi Jinping's "six stabilizations" will be achieved.