The rise and fall of Chinese poultry prices over the past year reveals that chicken is still a second-class meat in the Middle Kingdom. Chinese poultry meat prices surged about 35 percent from April to November 2019, according to wholesale price data issued weekly by China's Ministry of Agriculture and Rural Affairs. But all the price gains were erased by steady decline in 2020.

The spurt in poultry prices was driven by a meat shortage following the disappearance of at least 40 percent of China's pigs last year due to the African swine fever epidemic. The rise in chicken prices coincided with an even bigger surge in pork prices. The poultry meat price peaked in November 2019, the same month as the peak in pork prices.

What's surprising is that poultry prices declined as fast as they had risen. After reaching a November peak near 27 yuan/kg, wholesale poultry prices erased nearly all their 2019 gains and returned to 21.1 yuan/kg in June 2020, just slightly above their year-earlier level. Pork prices remained in the stratosphere, indicating that pork is still in short supply. The latest MARA release shows that July 2020 slaughter was down 32 percent from a year ago.

The two meats are substitutes to some extent, so their prices don't diverge from each other for more than a year or two. The lower level of poultry prices compared with pork prices reflects more efficient feed conversion, and chicken's role as a cheap meat. The lower volatility of poultry price reflects the shorter grow-out period for birds versus pigs, and thus faster adjustment of production volume in response to changing market conditions. Last year's surge in pork prices to more than double the poultry price is clearly an historical anomaly. The size of the spike in poultry prices in 2019 is also unprecedented.

During 2019 there were many anecdotal reports of farmers who cleared out their pig pens after losing their animals or selling them off during the African swine fever epidemic and replacing them with ducks or chickens. The increase in poultry output was in part motivated by the fear of losing pigs, but plummeting pig production also looked like a great opportunity for poultry sales. Several poultry companies also launched aggressive expansion plans in 2019.

These figures suggest price-inelastic demand and low receptiveness of Chinese consumers to poultry as a substitute for pork. A 19-percent decline in pork supply lead to a more-than-doubling of pork price. A 7-percent increase in poultry output was apparently enough to saturate the market and drive poultry prices down 35 percent.

An early August report by Central China TV found that chicken dealers and farmers in Anhui Province's Xuancheng Prefecture have struggled with falling prices this year. The report attributed the decline in price since January to excess supply resulting from increased slaughter and disruptions in markets during the peak covid-19 months in China. A processing plant in Xuancheng cut back daily processing to 60,000-65,000 birds, about 10,000 less than a year ago. The report remarked that prices fall when everyone piles into the industry, increasing supply. 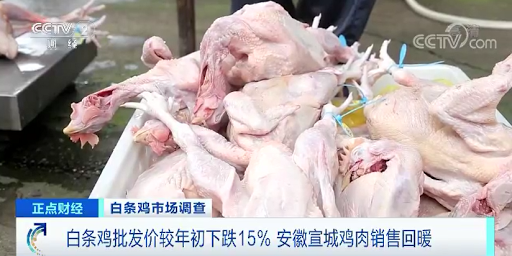 Interesting perspective on the role of broiler chickens in China was provided by an interview with an Asian representative of chicken-breeding giant Aviagen that appeared last year in "International Poultry" magazine. Introduction of broiler chickens to China is a relatively recent event and their role is closely tied to the fast food industry. The Aviagen official recalls that initial efforts to develop broiler production in China were focused on export to Japan and other foreign markets. Domestic consumption was spurred by the opening of the first Kentucky Fried Chicken outlet in 1987 when there were lines out the door for meals that cost about 10 percent of a monthly government salary. Since then, KFC has expanded to 5000 outlets in China and purchases over 400,000 metric tons of chicken annually. McDonalds is another driving force in chicken consumption.

Chicken consumption is still predominantly in fast food chains, school cafeterias, and factory canteens where the low price is an attraction. This year's closure of food service and institutional cafeterias hurt consumption of chicken disproportionately. The Aviagen official observes that many Chinese families are hesitant to cook chicken at home because it is troublesome to prepare and they don't know which foods to pair with chicken meat.

Thanks for sharing this wonderful information. View this also - Agriculture classified ads