The United States exported a record volume of pork to China in the first quarter of 2020. China's purchases soared as the impacts of an African swine fever epidemic took hold. China pork prices were already about double those in the United States a year ago when farmers were killing their pigs en masse to avoid the disease. Prices in China soared to quadruple the level of U.S. prices in October 2019. Prices spiked again in February during China's peak-covid month when most slaughterhouses were closed and farmers in blockaded villages could not market their hogs. Chinese pork prices have fallen since then, but they are still triple the level of U.S. prices. 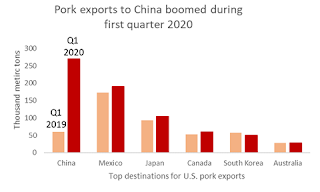 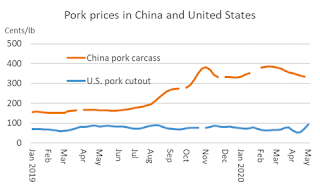 Annual production and consumptions statistics do not measure China's pork supply-demand deficit precisely because the deficit did not become apparent until the second half of 2019. Monthly slaughter numbers issued by the Ministry of Agriculture and Rural Affairs (MARA) show that the gap between monthly 2019 slaughter numbers and year-earlier amounts gradually widened during April-October 2019. The peak deficit was in October--the month of peak prices--when slaughter was 46 percent less than a year earlier. Slaughter numbers during the first three months of 2020 are still well below the last two years and in fact the lowest since these data were first reported ten years ago. The March slaughter volume was 37 percent less than in 2018 and 2019. These numbers don't include small facilities and butchers who don't report to the Ministry. 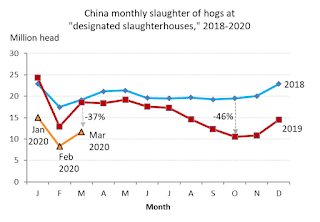 Quarterly national slaughter data pieced together from National Bureau of Statistics reports and a presentation at last month's China Agricultural Outlook Conference show a roughly similar deficit. The national slaughter total bottomed out at 96 million head in the third quarter of 2019. That was 64 million fewer than Q3 slaughter in the previous two years. Q4 2019 and Q1 2020 have similar 60-million-plus declines in slaughter from pre-ASF years. MARA projected 2020 hog slaughter of 501.5 million head--192 million fewer than in 2018 (the year the virus first entered China).

Quarterly pork imports rose from about 500,000 mt in Q1 and Q2 2019 to 725,000 mt in Q4 2019, filling less than 15% of the shortfall in production. The 1.2 mmt imported in Q1 2020 filled about a fourth of the 4.3 mmt deficit for that quarter. The government injected over 300,000 metric tons of frozen pork reserves into the market from January to April--also making a modest dent in the pork shortfall. (It has not been revealed how much of China's pork imports are stored in reserves, but the proportion is probably minor.)

Chinese news media have been under orders to tell only good news about the pork supply since last August when prices started skyrocketing. News reports in recent weeks frequently pointed to increases in sow numbers and declines in pork prices over several months as evidence that government policies to restore pork production are working (although MARA has not released a monthly swine inventory report since last October).

Last week, one journalist bucked the trend by warning that the decline in pork prices over the last two months may only be temporary because China still has a pork deficit of about 30 percent that cannot be quickly closed. This judgment seems to be consistent with the numbers above. While big companies with soaring stock prices are making big profits and expanding rapidly, the medium- and small farmer-entrepreneurs who produced most of China's pork before the African swine fever epidemic are sitting on the sidelines with debts incurred during last year's sell-off, scared of the risk of new outbreaks, discouraged by sky-high prices for piglets, or busy raising ducks and chickens.

On April 20, the Ministry of Agriculture issued ten-year projections of China's agricultural supply and demand. The estimate of 39.3 mmt of output for 2020 is nearly 20 mmt less than the target set for this year in MARA's 5-year plan, but the pork projection dutifully predicted a quick recovery. MARA expects pork output to bounce back to 50 mmt in 2021, then grow to 60 mmt in 2029. The China analysts anticipate pork imports will shrink to 1.23 mmt in 2029 and they give assurance that the country will maintain self-sufficiency in pork. 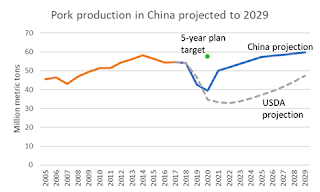 In contrast, USDA has a more pessimistic projection of Chinese pork output that falls more steeply and does not begin to rebound until 2022. The rebound is slower, and production in 2029 is about 10 mmt less than projected by China. USDA expects China to import 3.5 mmt of pork in 2020 and then imports will rise to near 4.7 mmt in 2029. The USDA projections imply China would account for about a third of world pork imports in 2029.

All these projections assume that African swine fever remains under control and there are no new outbreaks, but there are indications the disease is still being covered up. The Ministry of Agriculture has not reported any outbreaks on farms since November 2019 and did not report any at all in January or February. All reports of ASF since last December have been instances where trucks were discovered at toll booths, deliveries of piglets "from other provinces" were discovered to be infected and two instances of infection of wild pigs were reported.

The absence of official reports of on-farm outbreaks is belied by a Wall Street Journal report that foreign consultants working in China have observed or verified infections of African swine fever.

The day after the Journal report, China's MARA held a video conference for veterinary officials where leaders acknowledged that the African swine fever situation remains grim and complex, and they admitted that the industry lacks a firm foundation for recovery of hog production. Officials admonished some unidentified operators in the industry for not taking their disease prevention responsibility seriously, called for a crackdown on illegal transport of swine and told local officials to strengthen grass roots animal disease prevention. Despite persistence of the disease, officials reiterated the goal of restoring basic swine production capacity by the end of 2020 and normal pork supplies in 2021.