The gap between Chinese and U.S. corn prices has been widening. Chinese officials are rumored to be contemplating big purchases to take advantage of the discount U.S. corn, restock reserves, and make some movement toward their Phase one purchase commitments.

China's corn prices have been on the rise as the country emerges from covid-19 lockdown, while U.S. prices have tanked in sync with the plunge in petroleum prices and the disruption of the U.S. economy. The May 2020 futures price on China's Dalian exchange rose a cumulative 7 percent from January to the end of April, while the May futures contract in Chicago plummeted 23 percent in March and April. A modest 2-percent depreciation of the Chinese yuan against the dollar during China's covid peak magnified the difference in prices. The Dalian price rose to the equivalent of about $7.35 per bushel at the end of April while U.S. corn futures price fell to around $3.10 per bushel. 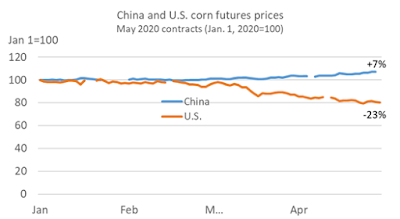 Spot prices reported by BRICS market consultants showed strong price hikes in nearly all Chinese regions. Cash price quotes at Dalian in late April were about $7.38 per bushel, up 11 percent from early January. Cash prices at other northeastern locations were also up 11-17 percent from early January. Prices in southern regions were up 7-11 percent. Cash prices at southern ports were $7.50-$7.80 per bushel in late April. The highest prices were equivalent to over $8 per bushel in southwestern provinces of Sichuan and Yunnan--regions with lots of pigs, separated from corn supplies by mountains, rivers, and deserts.

Prices at the Huangpu port in Guangdong province quoted by the South China Grain Exchange illustrate the complicated dynamics in China's corn market over the past year. These quotes reflect the price of Chinese corn shipped from ports in the northeastern region. In early 2019, corn prices dropped about 7 percent when African swine fever swept through southern China's pig herd. The price bounced back in April-June 2019 and fluctuated between 1950-2000 yuan/metric ton during July-December before the price in Guangdong spiked to 2050 yuan/mt in January 2020 when supplies were interrupted by the covid-19 lockdown. The price dropped to 1970 yuan in early March and climbed to 2060 yuan/mt in April, about 6 percent above its level at the beginning of 2020. 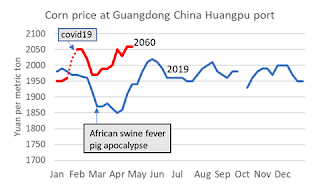 Most Chinese feed mills and starch manufacturers are reopened and gradually ramping up business. Pipeline inventories are said to be relatively low. Many are looking to build inventory while traders are cautious about selling with prices on the rise. Farmers have sold most corn from the 2019 crop. The Ministry of Agriculture is trumpeting news about pig farms restocking and pigs have consuming more feed per head due to heavier slaughter weights and lower feed efficiency. However, there are still at least 20 percent fewer pigs on farms than usual. There has been no surge in soybean meal prices that would indicate booming demand for feed ingredients. A divergence in Chinese and U.S. soymeal futures during April was entirely due to a slide in U.S. prices. 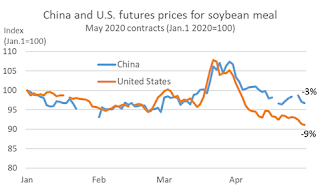 China Grain and Oils News estimated that the landed cost of U.S. corn with taxes was 1822 yuan/mt, well below prevailing prices for domestic corn at southern ports of 2140-2150 yuan/mt.

China imported 1.25 million metric tons of corn during Q1 2020--nearly all from Ukraine and Bulgaria--at an average unit value (before taxes) of about 1,500 yuan/mt. China did not start granting exemptions from punitive tariffs on U.S. commodities until March, so imports of U.S. corn will not appear for a while. China did import 633,400 metric tons of U.S. sorghum--a substitute for corn--in Q1.

In early April, Chinese investors began speculating about the possibility that low U.S. prices were about to prompt Chinese officials to make big purchases of corn, soybeans, and other commodities to meet purchase commitments in the Phase one agreement. By April 23, the rumor had taken shape as discussions of a government plan to restock reserves with 20 mmt of U.S. corn and 10 mmt of U.S. soybeans, plus cotton, wheat and other commodities, but it remained unconfirmed. Bloomberg reported this week that the Chinese government issued an additional 1.5 mmt of corn tariff rate quota to state-owned companies that could be a step in carrying out the plan. China's Ministry of Agriculture raised its estimate of 2019/20 corn imports by 1 mmt last month on expectations of purchases of U.S. corn prompted by tariff waivers.

China appears to emerging from the shadow of a corn reserve overhang that loomed over the market the last five years. News reports say the "temporary reserve" has been whittled down to 56 mmt from a peak purportedly more than 200 mmt in 2015-16. It is expected this year's corn reserve auctions will begin selling 1 mmt weekly in the second week of May. Most of the corn will be from 2015. There is also a rumor that 10 mmt of reserves were sold directly to corn processors in mid-April.

China has been consuming more corn than it produces as it digested its stockpile. The Ministry of Agriculture's balance sheet for corn estimated that corn inventory grew by 35 mmt or more annually 4-5 years ago, but the 2019/20 balance sheet indicates the inventory will fall 11 mmt. As the current stockpile is depleted, and with China consuming more corn than it produces, authorities will need to import tens of millions of tons if they want to maintain stockpiles to meet their current guidelines.

This may be why Chinese authorities are sending signals to encourage more corn production this year.
Posted by dimsums at 8:17 PM