Are Chinese soybean prices going up or going down? Yes. Prices for China-grown soybeans have risen faster than any other major commodity in China this year, but imported soybeans remain a bargain for the country's processors.

The price of the no. 1 soybean contract on China's Dalian futures exchange is up 40 percent since the beginning of 2020, but the price for the no. 2 soybean contract is down 16 percent. At least one Hong Kong journalist has misinterpreted the price increase as an indicator of disrupted supplies of imported soybeans. While imports from Brazil were down 12% during April, huge volumes are expected to arrive next month. The price of imported soybeans in China has fallen to near 3000 yuan/metric ton, a level not seen since 2016. 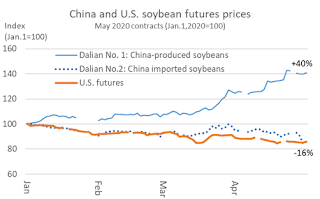 The no. 1 soybean contract specifies delivery of non-genetically modified soybeans, but the no. 2 contract does not have this restriction. Since GMO soybeans cannot be legally grown in China, the no. 1 soybean contract reflects the price of domestic soybeans and no. 2 reflects imported soybeans. The no. 2 soybean contract price generally follows the Chicago soybean futures price. In fact, the Dalian no. 2 contract is largely superfluous and not traded much since the Chicago market is used to price and hedge soybeans imported from the United States and South America.

The price of products made from imported soybeans has fallen this year. Dalian futures price for soybean oil has fallen roughly in parallel with the Chicago price--although not quite as steeply. China's soybean oil price rebounded slightly as China began to emerge from covid lockdown. According to the National Bureau of Statistics, the cash price for soybean meal--used in animal feed--jumped during March when soybean imports did slow, but the price started falling again in April. 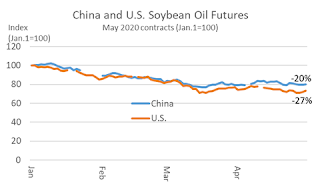 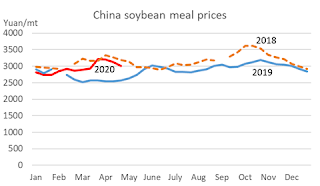 There is no clear reason for the rise in price for China-produced soybeans. Cash prices have also been rising. Market reports say farmers have sold most of their crop and traders are bullish on prices. They note that a granary in Heilongjiang Province boosted its procurement price to buy soybeans for reserves, putting a floor under prices. One report says that national, provincial, and local soybean reserves are largely depleted. There was a temporary disruption in supplies due to a blizzard in Heilongjiang during April.

Several reports link the rise in soybean prices to high pork prices. Tofu and other high-protein foods made from soybeans are substitutes for meat. There are no statistics tracking consumption of foods in China with any precision, but it seems certain that consumption of soybean-based foods has risen--pork prices have doubled this year and pork consumption is probably down 30-35 percent. One report notes that the rise soybean prices began in late December, about two months after pork prices had spiked. With restaurants reopening and life gradually returning to normal, consumption is surely rising, but supplies of both pork and food-grade soybeans are limited.
Posted by dimsums at 1:50 PM