China's customs data show that soybean imports by Beijing-based companies--which include state-owned COFCO, Sinograin, and Chinatex--reached 22 million metric tons last year--10 mmt more than they had ever imported in previous years. Meanwhile, imports by companies registered in other Chinese provinces dropped by a nearly-equal amount of 9.7 mmt. Beijing-based companies accounted for nearly 25 percent of China's soybean imports last year, about double their share in earlier years. 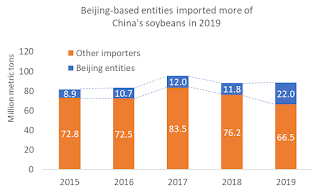 Another cut of the data shows that the boom in Beijing soybean purchases reflects a shopping spree for U.S. soybeans. Beijing companies bought 14.1 mmt of U.S. soybeans in 2019, up 11.9 mmt from the 2.2 mmt they purchased during 2018. Beijing-based companies' purchases of South American soybeans dropped by about 2 mmt. 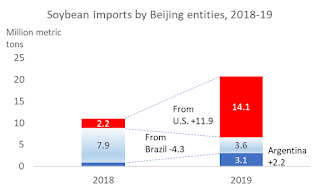 In contrast, companies headquartered in China's two biggest soybean-crushing provinces continued to shun U.S. soybeans. Jiangsu and Shandong Provinces have the country's largest crushing capacity, and most of it is operated by multinational and private Chinese companies. Jiangsu-Shandong imports of U.S. soybeans dropped from 6.2 mmt to 1.3 mmt between 2018 and 2019. Last year, no U.S. soybean imports arrived in Shandong or Jiangsu from March to October. Most of Jiangsu-Shandong's soybean imports came from Brazil last year. 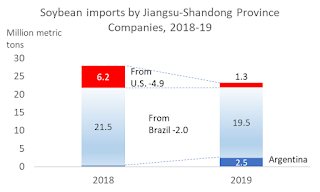 Imports by state-owned companies can be identified using the China's customs administration database which allows users to tabulate imports by the province where the importer is registered. The province where the importer is registered only loosely corresponds to the location of imports. (China no longer reports the customs district where imports actually arrived.) Companies registered in Jiangsu and Shandong Provinces have the most soybean crushing capacity and they account for the largest share of imports in most years.

Last year companies in Beijing and Shanghai accounted for a large share of imports although there is not much crushing capacity in those regions. Shanghai is the location of trading companies. Beijing companies COFCO, Chinatex, Sinograin are among the leading crushers that import soybeans for their facilities in coastal provinces from Liaoning to Guangxi. Sinograin is a major crusher and the manager of national grain and oilseed reserves. There is no indication of whether all the American soybeans were crushed or stored in government reserves. Beijing companies imported U.S. soybeans each month from February to December. The unit values of U.S. soybeans they imported were reported to be $17-27-per-ton less than Brazilian soybeans from September to December. 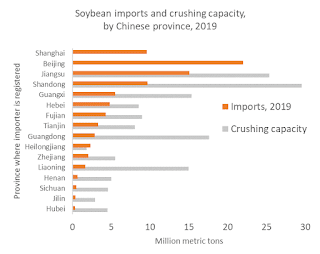 Overall, China appears to use about half of its crushing capacity. Agri.sci99.com reports that crushing capacity was 172.93 mmt at the end of 2019, about double the volume of soybeans imported and domestic soybeans crushed. Sci99.com said four new soybean crushing production lines were added in Sichuan and Liaoning Provinces last year. Crushing capacity has been growing at a slower pace than earlier in the decade, but imports have been flat, indicating a gradual decline in capacity utilization.