Distant observers presume that China can easily grow more soybeans in Russia to replace imported  American soybeans. On the ground there are a lot of obstacles to overcome, and Chinese farmers accustomed to pervasive subsidies at home are requesting financial aid and more efficient customs clearance to help them with their ventures in Russia. They also want relief from tariffs and taxes on imports designed to insulate domestic crops from imports.

The June 2019 "strategic partnership" agreement between Russia and China included a provision to promote production and trade in soybeans between companies in China's northeastern Provinces and Russia's Far East and Baikal Regions.

In July 2019, China's customs authority gave a "green light" by approving imports of soybeans from all parts of Russia. This was quickly followed up by a 4,400-metric-ton shipment of soybeans to the Jiangsu Province port of Nantong arranged by the two countries' agricultural behemoths, COFCO and Rusagro. 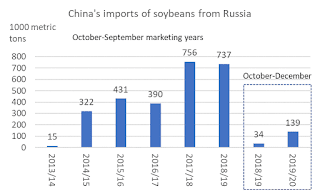 Chinese State media describe soybeans as a "test plot" for China-Russia agricultural cooperation. More than 70 companies from Heilongjiang Province already grow soybeans in Russia and there are eight foreign agricultural "industry parks" covering an area of 9 million mu (600,000 hectares), according to a report last year from China's Xinhua State media outlet. Dongjin Group--based in Heilongjiang's capital Harbin--was said to be planning a 1.4-billion-yuan ($200 million) investment in a 200,000-hectare "super modernized farm" in Russia's Far East. Other initiatives include the Huaxin China-Russia modern agricultural industry cooperation area and the Heihe Fengzhong Russia Amur agricultural industry park in Russian Far East, both of which are said to enjoy "favorable policies."

A March 2020 article appearing on a Chinese site for news about Russia notes that the cross-border soybean trade calls for subsidies to address a number of difficulties that still impede Chinese farms in Russia and transport of soybeans into the home market. The article says China's trade tensions with the United States prompted Russia to offer 1 million hectares of land and favorable financing for Chinese investors to grow and process soybeans. The article acknowledges that soybeans from Russia alone could not come close to filling China's 90-million-ton deficit.

The attributes of Russian soybeans appear to position them as competitors for domestic Chinese soybeans, not as replacements for beans imported from the Americas. The Russian soybeans are said to be non-GMO and high in protein, making them suitable for food products like tofu in the Chinese market. Their oil content is said to be about 3 percentage points lower than U.S. and Brazilian beans, making them less suitable for extracting cooking oil.

Costs of transporting soybeans and clearing customs are pressing concerns for the Chinese companies bringing them home from Russia. They travel 100-to-200 km on aging, winding roads from Russian fields to border crossings. Train cars are in tight supply, so most Russian soybeans are brought into China by truck. The transportation cost is reported to be 100 yuan (about $14-to-15) per metric ton.

Clearing customs and inspections at the border is a bottleneck. According to Russians, about 80 percent of the trucks at border crossings are Chinese. The Russian inspection stations at crossings in remote regions have few officials. Their strict inspections are said to take half an hour or longer.

The article estimates that only 10-15 trucks are processed per day at the Tongjiang crossing over the Amur River. Tongjiang is one of the chief points of entry for Russian soybeans, handling 68,000-to-109,000 metric tons annually during November-April. Two years ago, Tongjiang officials on the Chinese side sent a letter to their Russian counterparts in the Jewish Autonomous Oblast Economic Bureau requesting faster customs clearance to address the "urgent need of enterprises." Two years later, this article says long lines and hours-long waits are common. It calls for upgrades of infrastructure and services at border crossings. The article also complains about "intangible costs" (bribes?).

A railroad bridge at Tongjiang is a flagship project signifying Russia-China cooperation that has been in the works for a decade. The bridge was half-completed for years as China promptly built three-fourths of the bridge from their side, but the Russians were delayed by squabbles over contractors, inflated costs, and a plunge in the value of the Russian currency. The two sides of the bridge were connected last year, but it is not quite complete. The Amur River is choked with ice during the long winter months when soybean freight peaks. The first highway bridge connecting Russia and China at Heihe was completed last year. (Iron ore and natural gas appear to be the main commodities targeted for trade on these routes.)

The local government of Tongjiang gives a subsidy of 20 yuan per metric ton of soybeans returned from Russia to help with the costs of transportation. However, Chinese soybean merchants say the subsidy needs to be higher to encourage enterprises to ship more soybeans.

The article also complains about lack of government support for Chinese farms in Russia. It complains that only high-profile projects like industrial parks and model companies (such as the super-farm project mentioned above?) receive support. Microenterprises and small businesses can't apply. The article complains that support is only piecemeal and ticks off a laundry list of activities that need government support: investment, financing, labor expenses, agricultural insurance, storage, processing, and distribution.

Soybean farmers are attracted to Russia by cheap land and lower expenses for some other items, but many have cash flow difficulties. Chinese farmers mostly have to self-finance input costs paid early in the growing season because production credit is not widely available. Some Russian banks will lend to Chinese farmers, but borrowers must supply Russian property as collateral and only 50-to-60 percent of the value is accepted as security for loans. Three-year loans have an interest rate of 17 percent and higher, about double the rate charged by Chinese banks, they say.

The article complains that taxes are too high. Imported Russian soybeans are charged the same 3-percent tariff as other soybeans, plus an "import tax" (probably referring to value added tax assessed on the gross value of imported soybeans) of about 10 percent. The article suggested preferential tax treatment for soybeans produced abroad by setting a lower rate, giving a tax rebate, discounting the value of bartered goods, or giving credit for labor, transportation or machinery expenses.

The article doesn't mention it, but the preponderance of Chinese farming ventures in Russia are run by companies or people associated with the system of State farms in Heilongjiang Province that were established as military outposts 60 years ago to populate borders threatened by Russian incursion. State Farm 209 is not far from Tongjiang, and villages in the area have names like "Victory," "Pioneer," and "East Wind." The Russian side of the border appears to be wilderness.

Long propped up with subsidies and bank credit, China is now trying to turn its State farms into money-making agribusinesses. They have also been tagged as models for overseas farming investment, but they often flounder when they venture abroad without the i.v. drip of state bank loans and help from friendly government officials.  (Beidahuang, the flagship company of the Heilongjiang State Farm system, had a high-profile venture to grow soybeans in South America a decade ago that quietly disintegrated.) It turns out that the Chinese agricultural model doesn't travel well.

The main threat of the soybean ventures appears to be incursions of Russian territory as China effectively colonizes its distant, empty Far East. But that's a story for another time.
Posted by dimsums at 7:31 AM