China is the world's leading importer of rice yet it has huge amounts of rice in warehouses that no one will buy.

According to Grain and Oils News, authorities held auctions to release 101 million metric tons of rice from reserves during 2015, but only 5.3 mmt of it was sold. There was little interest in any types of rice:


Grain and Oils News focuses on the early-season rice as the nexus of the problem. Authorities have offered about 500,000 tons of this rice every week since October, but there have been virtually no buyers.

The demand for early rice as animal feed is also declining because the price of corn has been declining and imports of other feed ingredients like sorghum and barley are much cheaper.

Since the 1960s, Chinese communist officials have alternated between prodding farmers to grow the crop when they were worried about food supplies and discouraging them from growing it when there is a glut. In 2007, a Peoples Daily article warned that farmers in southern China were switching from two rice crops to a single crop, leaving fields idle for part of the year. The following year an article in Xuexi Shibao, a journal for communist officials, warned that the idle rice fields were a threat to national food security. By 2011, officials rolled out a program to revive double-cropping of rice by subsidizing rice seedling farms, greenhouses, and transplanting equipment, giving villages financial awards for keeping fields fully cultivated, and cajoling villagers into subcontracting their land to farmers who promised to plant two rice crops.

The extra rice produced as a result of these programs was bought by the government to prevent prices from falling and has been held in warehouses ever since. The early rice offered for sale in recent months was produced two-to-three years ago in 2012 and 2013. The decline in early rice output began in the late 1990s--during a previous glut--and has stabilized in the last ten years (if we can believe the statistics). There has been a robust increase in output of single-crop rice which is also in surplus. 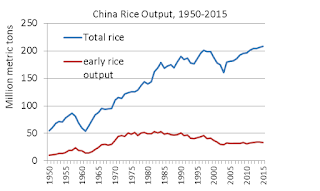 Ironically, Grain and Oils News proposed cutting back on planting of early rice as a strategy for easing the glut of unsold rice. He recommended reversing the recent policy by encouraging farmers to switch back to growing a single rice crop annually . The Grain and Oils News author referred to the current party line of preserving production capacity to argue for cutting back from two crops to one. In short, he calls for reversing the big campaign to promote early rice planting which officials said was necessary to avert a food security catastrophe. As recently as 2014 Peoples Daily warned that farmers giving up rice double-cropping was a hidden threat to food security.

Last month, the government announced that the minimum prices for most types of rice will be held steady from last year for the 2016 crop. However, the early rice price was cut slightly to 133 RMB/50kg from last year's 135 RMB/50kg. This slight reduction is described as an improvement in the minimum price mechanism. Presumably, the early rice price was cut because it competes directly against cheaper imported rice.
Posted by dimsums at 9:59 PM