Chinese authorities announced the minimum price for the 2016 wheat crop last October, nine months ahead of the marketing season. Their decision to hold the wheat price steady at RMB 2360 /metric ton -- the same level as the last two years -- may result in a serious glut of low-quality wheat this year.

Authorities thought they could insulate the wheat market from declining prices in the rest of the world by clamping down on imports -- 90 percent of the wheat import quota is awarded only to state-designated trading companies who presumably can only import when the government gives them permission. However, the wheat price is facing strong downward pressure as the price of corn and related feed materials has fallen significantly below the wheat price.

Grain and Oils News warns that China's wheat market will face heavy pressure to sell off stockpiles in the months after the spring festival holiday. During January, the government held auctions to offer 4.6 million tons of wheat from reserves, but less than 25,000 tons sold. (When a similar amount of wheat was offered for auction in January a year ago, 57 percent of it sold.) The article reports that stockpiles of wheat are up significantly in many regions this year. Grain and Oils News estimates that there is 39-to-40 million tons of excess wheat that was purchased at minimum prices and needs to be released to the market. With another harvest coming up in May-June, the March-April period will be critical for offloading the wheat. 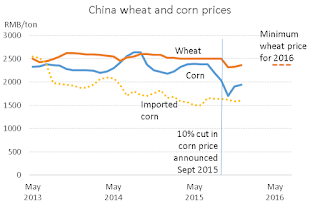 China's wheat and corn markets are linked through the use of wheat as animal feed. During 2012-13, when corn prices were high, over 20 million tons of wheat were used for feed in place of expensive corn. In addition, milling the wheat crop produces bran used as feed which is equal to about 20 percent of the wheat crop. Now that corn prices have fallen below wheat prices, the amount of wheat used for feed has shrunk by about half, according to estimates by USDA and China's National Grain and Oils Information Center. Grain and Oils News points out that the surging supply of imported substitutes for corn has also cut into feed demand for wheat.

The link between wheat and corn prices is evident from the simultaneous drop in both prices in Shandong Province after the September 2015 announcement of a 10-percent cut in the support price for corn. The decline in wheat prices was stemmed by the October 23 announcement that the wheat price would be held steady in 2016. Putting a floor under the price of wheat makes traders less inclined to accept lower prices for wheat. They need not worry that holding the wheat longer will result in a loss since they're assured the price won't fall.

Wheat ends up stuck in government warehouses where interest and storage costs are subsidized. The government offers wheat for auction at starting prices that would recover the acquisition cost of the wheat. At those prices, however, there are few buyers. Grain and Oils News observes that there is little chance of changing the auction policy, so success rates will remain low for the auctions.

With the "flame out" of feed demand, flour-milling is the only source of demand for the wheat. Grain and Oils News says the demand for common wheat is soft while there are insufficient supplies of wheat with special characteristics. National Grain and Oils Information Center estimates that use of wheat by flour mills declined from 97.1 million tons in 2012/13 to 90 million tons in 2015/16.

With excess supplies of common wheat and weak demand, the government will not be able to offload its inventory. Grain and Oils News advises dealers to make rational plans to sell wheat bit by bit to avoid dumping large volumes on the market that would depress prices.
Posted by dimsums at 10:23 PM

Great article, I've read it completely and got answers of many things which i didn't knew before keep on posting good things.

Thanks for sharing this wonderful information through this blog, along with want to know more information please visit,
Bulk Wheat