A Chinese Communist Party discipline inspection team berated the National Bureau of Statistics for poor communist party discipline and ongoing violations of President Xi Jinping's anti-corruption campaign, a reminder of the highly politicized nature of Chinese statistics and the incentives for corruption in the statistical system. 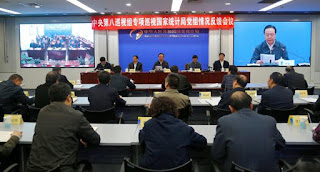 An article from the Central Commission on Discipline Inspection web site re-posted on the National Bureau of Statistics site reported on a January 31, 2016 meeting where an inspection team berated the bureau's communist party organization for weak leadership, poor party discipline, failure to fulfill responsibilities, and failure to establish party organizations at the grass roots level. The inspectors found a number of problems at the bureau, including improper employment and promotion practices, officials who used "data" for personal gain, abuse of power, and violations of President Xi's "eight regulations" such as excessive office space. The inspectors accused statistics officials of failing to do their jobs and complained of continued problems with "bureaucracy" and "lazy government."

The inspectors' inquisition came several days after the chief of the Bureau, Wang Bao'an, was fired for serious disciplinary infractions. Wang had only been at the statistics bureau for half a year, and his sins were apparently committed when he was in much more lucrative positions overseeing massive public works investment.

A year ago, the statistics bureau held a meeting where the previous director reminded the bureau that falsification of statistics is a type of corruption that should be severely punished.

A commentator writing on the Caixin web site recalled the "fake statistics = corruption" admonishment and pointed out that some believe misleading data has prevented the government from capably managing the economy in recent years. There is strong pressure from officials to produce statistics that show success which can be reported to higher level officials, resulting in promotions and awards.

An example of the absurdity of a politicized statistical bureau is a questionnaire administered by the National Bureau of Statistics last year which found that 91.5% of the public is satisfied or relatively satisfied with progress on the communist party's clean government and anti-corruption campaigns. How could the bureau have possibly reported any other result?

Besides corruption and deliberate falsification, there may be more fundamental problems. Political reliability trumps professional competence in selection of personnel. Why would clever and capable statisticians take up employment in such a highly politicized organization? Even if the statisticians are good, the quality of their surveys depend on respondents telling the truth when they fill out the forms.

In a press conference to discuss the new GDP statistics in January, a reporter asked former bureau chief Wang how the bureau is adjusting its methods to monitor such a rapidly-changing economy where new companies are springing up, old ones are going out of business and new ways of doing business are appearing. Wang talked about plans to make improvements in the future but could not say how statistics are keeping up with changes already happening.
Posted by dimsums at 8:51 PM

"An example of the absurdity of a politicized statistical bureau is a questionnaire administered by the National Bureau of Statistics last year which found that 91.5% of the public is satisfied or relatively satisfied with progress on the communist party's clean government and anti-corruption campaigns. How could the bureau have possibly reported any other result?"

WHY would they want to report any other result?

What's wrong with the result they reported?