Genetically-modified soybeans are illegally grown in parts of China's major soybean-growing region, according to a report from China Business Journal, a news media outlet. On September 9, the provincial agriculture commission announced an investigation of illegal soybean cultivation and says the culprits will be "severely dealt with."

A food processing company that buys soybeans in Heilongjiang Province told China Business Journal that it discovered GMO soybeans during 2013 and 2014 when it tested samples it had purchased in the province's Suihua prefecture. The company claims that GMO soybeans are widely grown in counties of that region.

No one knows where the seeds came from. One Heilongjiang field manager reports that seed from a trade show was surreptitiously sold. According to China Business Journal, Monsanto says they have never sold GMO seed in China. Other reports say that stealing and propagating seeds is commonplace in China. Chinese authorities have periodically reported intercepting seeds mailed into the country.

Some commentators speculate that the news is being spread by people who want to undermine China's ban on growing GMOs. Some cited Brazil as an example where an end to the ban on GMOs was similarly forced by widespread flouting of the ban by farmers. A farmer told China Business Journal, "We are all waiting for approval to plant GMO soybeans because everyone says they're much easier to grow."

This is the latest evidence of cracks in China's strategy of preserving GMO-free status for most food crops while allowing a controlled flow of imported GMO crops from other countries. The leakage of GMO soybeans into food processing industry was exposed this summer. The widespread planting of GMO corn in some areas is an open secret, and the Ministry of Agriculture promised to check for GMOs in domestic corn. 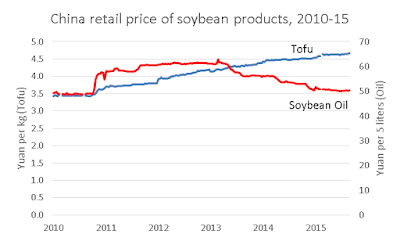 National Bureau of Statistics data illustrate the divergence in prices between the two main food products using soybeans as raw material. Since 2013, the price of tofu -- made from non-GMO domestic soybeans -- has marched steadily upward. Over that same period, the price of soybean oil used for stir-frying has tumbled along with prices on the global market (see chart).

An important product of soybeans is the meal left over after oil has been extracted from the beans, a key ingredient for animal feed. Soybean meal prices have been on a long slide as supplies outpaced tepid demand from the livestock sector hit with avian influenza, shrinking hog herds, and disruptions of fish-farming last year. Since 2013, the prices of both major products made from imported soybeans have fallen--soybean oil 22% and soybean meal by 18%. Meanwhile, tofu prices marched upward by a cumulative 12%. 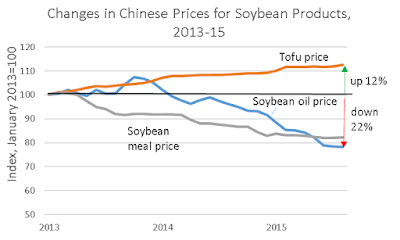 Note: Prices converted to an index where January 2013=100.
Data source: China National Bureau of Statistics and Ministry of Agriculture.

The gap between domestic and global prices gradually brought about the bifurcation of China's soybean industry over the past decade. Processors facing sinking prices for cooking oil and meal are under strong pressure to cut costs by using cheaper imported soybeans. Processors making tofu and other food products are more insulated from imports, and they have paid a growing premium for domestic non-GMO soybeans.

The divergence of Chinese and global prices since 2013 has created such huge price gaps that holes are developing in the compartmentalization. The incentive to "cheat" by using cheaper GMO soybeans for purportedly non-GMO products has increased along with the 25-percent price gap. The incentive for farmers to grow GMO soybeans has also strengthened.

At the farm level, growing soybeans for oil and meal in China has become a mostly unviable business. Farmers are moving out of soybeans, producing food-grade beans at a premium, moving over the border to grow them in Russia, or looking for ways to cut costs and make a profit--such as growing herbicide-tolerant GMO soybeans that require less work to keep weeds down.

Economics may also undermine China's similar strategy to cordon off its wheat and rice sectors for food security purposes. Authorities have indicated that they intend to continue supporting prices of those crops given their importance as staple foods.

Wheat and rice prices have followed a steady-upward climb similar to that for tofu. As Chinese officials pull the props out from under prices of other commodities, similar imbalances will manifest. For example, rapeseed production is plunging as its price falls and farmers shift to wheat which still has a support price. 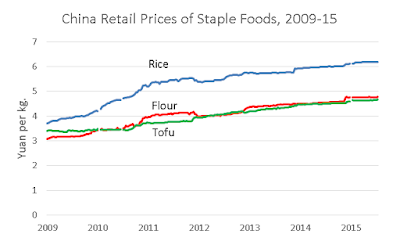 The bottom line is that a large country cannot successfully compartmentalize certain segments of its economy to open some to foreign trade while sheltering others from the global market. Leaks develop and officials must take ever-more complex measures to plug them. Chinese leaders tried to use soybeans as a single release valve for its excess demand for farm commodities while insulating domestic producers from the world. Now the flow through the release valve is too strong to control and cracks in the dike are forming.
Posted by dimsums at 2:46 PM