China has subsidized creation of the world's largest cotton patch in its arid northwestern Xinjiang territory. China is the world's second-largest cotton producer, and 60% of its output came from Xinjiang in 2014 (one source says the share is 70% in 2015). Hundreds of thousands of laborers have to be brought in from other provinces to pick the cotton. And, with virtually no textile industry nearby--the government is also subsidizing the creation of a Xinjiang textile industry to process the cotton.

A survey by the Xinjiang Academy of Agricultural Sciences reported last month that farmers there received an average of 444 yuan per mu (about US$ 435 per acre) in subsidies from the trial "target price" subsidy program that began in the 2014/15 marketing year. The subsidy was enough to give the Xinjiang cotton farmers a profit of 235.8 yuan per mu. Without the subsidy, farmers would have lost 208.56 yuan per mu. 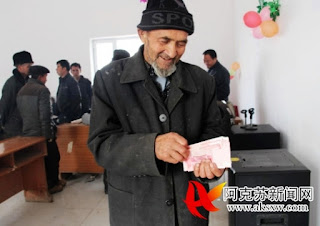 The survey reported that the average cotton price received was 5.5 yuan/kg for seed cotton, and gross receipts were 1962.6 yuan per mu. Based on these figures, the 444-yuan subsidy equaled 22.6 percent of the value of production in Xinjiang. (That far exceeds China's WTO-imposed limit that subsidies can be no more than 8.5 percent of the value of output.)

An April report in International Commerce News said that the subsidy could be as much as 700 yuan per mu in parts of Xinjiang with high yields and good quality cotton. The report emphasized that subsidies were designed to ensure that payments went to actual producers of cotton and that they increased incentives to produce greater volume and improved quality of cotton. China's cotton subsidies for 2014/15 vary by locality and are calculated either per unit of land or with a combination of land and quantity.

Compared with Xinjiang's, the cotton subsidies are lower in other parts of China but higher than grain subsidies (which are roughly 60-to-100 yuan per mu). There is not much information on these subsidies, but here are some examples discovered on the Internet:
With lower subsidies and high labor requirements, cotton production is plummeting outside of Xinjiang.

While the subsidies seem generous, fewer farmers are growing cotton, even in Xinjiang. The Xinjiang Production Corps said it reduced its cotton area by 12.9% this year, mostly due to removal of 1 million mu of low-yielding arid land from production, but availability and cost of labor also played a role. A survey conducted in southern Xinjiang during August reported that 2015 cotton area declined by 8%-to-20% in several counties that were visited. The Xinjiang Academy of Agricultural Sciences report said the Xinjiang region's cotton area declined 4 million mu (267,000 hectares) in 2015.

Cotton is a labor-intensive crop, and that's a problem in a country where wages are rising rapidly. Despite having made a lot of progress in mechanizing production, a report on the sprawling Xinjiang Production Corps says the need to import vast numbers of laborers to pick cotton is a continuing "headache." Since 2003, Xinjiang has been importing hundreds of thousands of laborers from other provinces each year to help with the cotton crop but now it's harder to get laborers. The number peaked at 600,000 in 2008. In 2015, reports say that Xinjiang will only be able to hire 142,900 migrant workers for the cotton crop, only a fraction of the 288,700 that are needed. The number of workers was reportedly down 64,000 from last year. The cost for each worker is a little over US$ 1000.

Another objective of officials is to "create a complete cotton industry chain" in Xinjiang. China's textile industry is concentrated in coastal provinces--Shandong, Jiangsu, Zhejiang--thousands of miles from Xinjiang--so the cotton requires further subsidies to transport it across the country. Xinjiang is expected to process 600,000 metric tons of the 3.5 million metric tons it produces this year. The region only has 216,000 metric tons of "above scale" yarn processing capacity this year but that's up 18.6% from last year.

According to the survey in southern Xinjiang last month, textile mills reportedly get a subsidy of 3000 yuan per metric ton processed. A new industrial park in Korla City started with 880,000 spindles, expects to have 5 million by the end of the year, and 10 million in five years. Xinjiang has a textile industry plan referred to as "Three cities, seven (industrial) parks, one center," that also features creation of brands, science and technology, and management innovation.

The new "target price" subsidy pays farmers based on the gap between the market price and a target set by the government when the market price is less than the target level. This replaces the "temporary reserve" support price that held Chinese prices far above world prices during 2011-13. The "target price" is said to be more market-oriented, decouples support from farmers from the price, and restores competitiveness of the Chinese textile industry by allowing the price processors pay for raw materials to fall in line with global prices.

The "target price" is supposed to be a model for the new direction in Chinese farm subsidies, yet it was implemented in a slapdash and secretive manner. At a meeting on farm support policies for Chinese agricultural officials several months ago, Vice Minister Chen Xiaohua's speech said, "Overall the situation is good and the price formation system has become more market-oriented," but he also acknowledged that "the reform is still in its exploratory stages and there are some problems. He insisted, "This policy is the future direction of reform, and we can't turn back due to temporary difficulties." 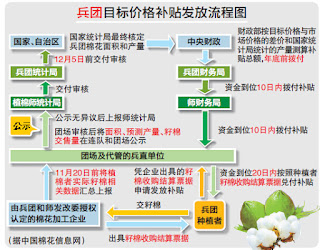 How many Chinese farmers would comprehend this?

There has been virtually nothing revealed about the operation of this high-profile subsidy experiment. At the May meeting, Vice Minister Chen's speech revealed that the first year met with a number of problems. A Ministry of Agriculture evaluation of the target price policy released in July 2015 summarized the problems and promised improvements in the target price program's second year.

According to the Ministry's report, details about the program were announced late, and publicity was poor. The program's complexity and data requirements demanded a great deal of effort from local officials to verify how much cotton was planted by each subsidy recipient. According to the Xinjiang Academy of Agricultural Sciences survey, Xinjiang has 2.5 million cotton farmers with holdings averaging 12 mu (less than 2 acres) and only 46,000 farms planted 50 or more mu of cotton. The Ministry's report says some farmers collected subsidies although they illegally planted cotton on environmentally-fragile land; other farmers entitled to subsidies didn't get them. There was false reporting of land and falsified warehouse receipts, and subsidy funds arrived later than expected, according to the report. Responsibilities were not clearly defined for various departments and levels of officials, and some tasks fell through the cracks. A single subsidy standard for the whole region was deemed inappropriate in view of the diverse growing conditions and yields. Farmers in some regions reportedly couldn't cover their costs, even with the subsidy.

The market price for cotton seems to have dropped further than officials anticipated. The Ministry's assessment report says the farm price dropped to 6 yuan/kg from as high as 9 yuan/kg in previous years. Xinjiang surveys report that the price was in the range of 5 to 5.5 yuan/kg and farmers say they were not satisfied with the price. The price offered by processors was reportedly lower than farmers were willing to accept. The Xinjiang Production Corps claims to still have substantial volumes of cotton from the 2014 crop that it has not been able to sell. Processors in Xinjiang reportedly lost money during 2014/15 as the price fell over the course of the season and will be cautious in purchasing this year. 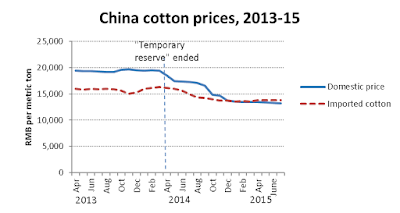 Chinese cotton prices have fallen 30% since the end of the temporary reserve program in 2014. The Ministry of Agriculture's July 2015 situation and outlook report says that the price for Grade B 3128 cotton fell 23.5 percent from a year ago. The price on the Zhengzhou cotton exchange was down 26.8% from July 2014.

This year, the target price subsidy program will be tweaked to give farmers stronger production incentives and simplify procedures. Last year, the subsidy amount was based 60% on planted area and 40% on sales. This year, it will be "based mainly on production." Ten percent of subsidy funds will be set aside to give extra subsidies for four prefectures in southern Xinjiang. They plan to cut back on administrative overhead in the program: in 2014, Xinjiang's cotton subsidy was paid out in four installments; this year it will be cut to two. This year, the Xinjiang Production Corps is setting up a database to track planted area, cotton sales, test results, processing and subsidies.

Why would China spend huge amounts to build a high-cost cotton industry thousands of miles from most of the consumer market? One reason is the anachronistic carryover of the obsession with cotton-textiles which used to be one of China's main industries during the last century. Another is to buy stability in the restive Xinjiang region. The cotton subsidies also support another anachronism--the Production Corps, an archipelago of Han Chinese settlements set up 50 years ago to solidify control over the colony territory. Finally, the Ministry of Agriculture describes Xinjiang as a core strategic region for the "One Belt, One Road" initiative to link up China with Central Asia and beyond.
Posted by dimsums at 8:14 PM

Fantastic post - Great explainations and thinking.I'm looking forward to what you have for us next..!
Agro Products