Chinese authorities lowered their floor price for corn for the first time since the program began as they battle bloated stockpiles and surging imports of corn-substitutes.

A September 18 document from China's Grain Administration announced a "temporary reserve" price for corn of 2000 yuan per metric ton for 2015/16. This is an 11-percent cut from the 2014/15 level and a return to the level set in 2011/12. This year's price floor is equivalent to $8 per bushel, more than twice as high as corn prices in the United States. 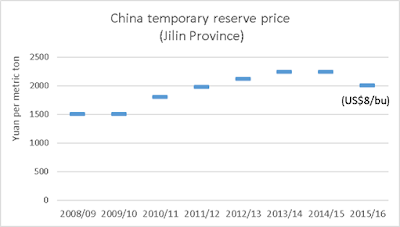 The beleaguered temporary reserve program will operate only in China's four northeastern provinces from November 1 to April 1 (about a month earlier than in previous years). This year, the program will set a single floor price for all four provinces instead of setting different levels for Heilongjiang, Jilin, and Liaoning/Inner Mongolia as had been done since the program was first launched in 2008. The discount/premium for different grades is 50 yuan/metric ton.

Reflecting the concern about moldy corn in the stockpile, the program requires that corn purchased must be properly dried and meet national standards for moisture and mold. It also includes vague language demanding that local governments finance purchase of substandard corn to fulfill their obligations under the "governors responsibility system" for food security.

Reflecting the lack of storage space, the program gives instructions for renting warehouses and it sets subsidies of 70 yuan/metric ton for construction of open-air or temporary storage. The document authorizes three state-owned companies (COFCO, Chinatex, and China Aerospace) to supplement Sinograin in purchasing corn. The purchasing cost (presumably subsidized) is set at 50 yuan per metric ton.

The cut in corn price was forced by mounting stockpiles as corn production rose, consumption tailed off, and high Chinese prices attracted imports of substitutes -- sorghum, barley, distillers grains, and cassava. The government purchased and stockpiled successively-larger volumes of corn over the past three years. Auctions of the corn attracted little interest because prices were too high. 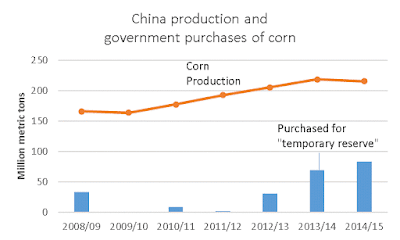 The "temporary reserve" of corn has swollen to 158 mmt according to calculations by Chinese analysts who added up purchases and sales over the years. However, the total corn reserve is 200 mmt--nearly an entire year's supply and more than a year's consumption--according to a National Development and Reform Commission official's speech to a corn industry conference this week. The official described that total as "far beyond the reasonable level" and he said it shows clearly that supply exceeds demand. The NDRC official raised concerns that some production areas have so much corn that officials are unable to buy it, can't store it, can't sell it, and budgetary shortfalls threaten "trouble after a big harvest."

At the same meeting, the deputy director of the National Grain and Oils Information Center surmised that China has reached "a new plateau in which supply will exceed demand" and there will be downward pressure on prices for several years.

The 2000-yuan/mt price floor is slightly below current corn prices in the northeastern region. Prices there currently range from 2040 to 2140 yuan. Normally this region--the major surplus area--has the lowest prices for corn but prices are artificially high due to the stockpiling program that operates only in that region. Corn prices in parts of Henan, Hebei, Shandong, Shaanxi, and Anhui Provinces are around 1900 yuan, and 2000 yuan in southern Jiangsu. There may be further downward pressure on prices once the newly harvested corn comes on the market.

The temporary reserve program has disrupted corn marketing in China by elevating prices in the main surplus region. There is incentive to ship corn from low-price areas into the northeast to sell to the reserve instead of shipping it south. Shipments from the northeast to the south shrank this year as more northeastern corn went into the reserve. At ports in southern China's Guangdong Province the price is 2300-2310 yuan/mt--kept relatively low by availability of imported substitutes. Prices are 2500 yuan or higher in Shanghai, Zhejiang, Hubei, Hunan, and as high as 2800 yuan in Yunnan.

Further west, high prices for corn and plunging prices for cotton stimulated a surge of western-China corn production. At a panel discussion held at this week's corn industry conference, a feed industry executive from Sichuan said feed mills there had stopped buying corn from the northeast this year, instead purchasing locally or shipping in corn from Xinjiang.

In his speech to the corn conference, the NDRC official suggested that China intends to move away from interfering with farm prices while experimenting with measures to regulate the flow of imports. Support for farmers will be decoupled from market prices by moving to "target price" subsidies once experience from pilot programs has been evaluated.

Instead, officials intend to shift their heavy-handed tinkering to imports. The NDRC official called for a "global vision" on food security which entails "coordinated" use of domestic and imported resources. He offered a number of vague principles for "managing" imports, making them more predictable and stable, diversifying imports, estimating the volume of imports needed for each commodity, stronger testing of imported commodities, "integrating" imports with reserves, and improving the registration and monitoring of imports.

China's Minister of Agriculture made similar comments in his recent discourse on sustainable agricultural development. The Minister said, "We don't oppose imports." Rather, he said, the key is to better regulate to flow of imports and exports to optimize the development of domestic production and domestic industries.

So how does China Aerospace get roped into buying up corn?

It seems China Aerospace has some granaries in northeastern China. Just guessing that they might have a history of buying grain for the military/air force.