The Chinese State is intent on creating an economy dominated by corporate behemoths. Big, sprawling corporations are viewed as strong and easy for authorities to manipulate and control. Small, fragmented business entities are viewed as chaotic, undercapitalized, weak, and unstable. In reality, the flexibility and market knowledge of independent entrepreneurs is vital to the resilience of the country's economy. In many cases, the lumbering behemoths rely on the microenterprises to a surprising degree.

China's grain marketing system is an example of the symbiotic relationship between behemoths of the corporate state and the organic microenterprise sector. In 2000, Chinese authorities created Sinograin, a sprawling state-owned corporation charged with managing its massive grain reserves. The company was created from the rump of the bloated grain marketing system that was chopped up and renamed at the end of the 1990s. Sinograin's initial registered capital was roughly US$ 2 billion, and it gets a steady stream of loans from the government's Agricultural Development Bank of China which now has an outstanding loan balance of 3.1 trillion yuan (about $500 billion).

Sinograin only has one or two grain depots per county which are miles away from most farmers who want to sell their grain. That means Sinograin has to rely on an army of family-run grain-trading businesses to collect grain and deliver it to them.

A recent report by a Chinese researcher on the estimated 200,000 grain traders in Henan province describes the traders as a bridge between farmers and granaries. In contrast with the Sinograin depots, traders are dispersed across the countryside. Most are family operations run out of their homes or small shops in centrally-located villages or towns. They run on a shoestring, using their own savings as working capital, sometimes borrowing from family or friends when they are short of funds. The traders lack collateral for loans, loan application procedures are lengthy, and several guarantors are needed. 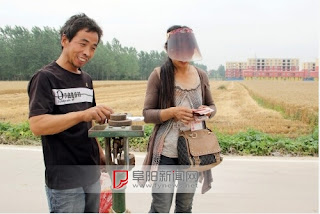 Grain traders go to the fields to buy wheat as soon as it is harvested. Source: Fuyang Daily.

According to the report, Sinograin depots say they don't have enough people to go out to buy grain from farmers; they wait for farmers to come to them. In contrast, the traders go door-to-door buying grain in villages, load it and haul it away in small carts or trucks. Most traders are farmers themselves, so they understand grain production and have an intimate knowledge of market conditions.

The traders make money by buying grain at a 30-to-40-yuan per metric ton ($5-$7) discount from farmers and re-selling it to grain depots or flour mills. They buy 10 to 100 metric tons per day, usually selling grain the same day they buy it, thus keeping little in inventory.

The Sinograin depots get most of their grain from these traders. According to the report, managers of Sinograin depots describe the traders as "our golden customers" whom they have cooperated with for many years. 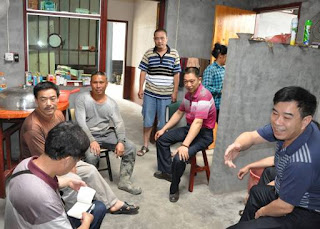 In this county, grain bureau officials organized a campaign
to visit villages in order to better understand the farmers;
private grain traders are mostly farmers themselves.

The government's price support program operates by buying from traders at the support price; the farmers get a little less than the support price but they save the time and trouble it would have taken them to haul the grain to a distant depot. Sinograin is holding huge inventories of grain that are a "state secret."

The grain traders have also benefited from the price support program. Until this past year, the government raised support prices each year. That eliminated risk of losses from falling prices. Traders were assured that prices would rise each year and that Sinograin would purchase all the grain they offered at the support price.

Thus, a symbiotic relationship between Sinograin and the army of small traders developed.

The researcher who wrote the report on grain traders praises their flexibility and knowledge of the market but like most scholars and officials seems uncomfortable with small, unreliable businesses. He emphasizes the importance of "scale" business and wants them to form associations that would act like cartels to manipulate the price. He reports that there are some rudimentary networks of traders developing, but the traders don't like the association idea, wondering why they should cooperate with other traders who are their "enemy." He suggests all kinds of subsidies and loans and calls for monitoring and regulation, but one wonders if such an embrace from the government might squeeze the life out of these entrepreneurs.

China is at a critical juncture where it is ambivalent about the family businesses that are vital to the resilience of its economy. Premier Li Keqiang has called for bank credit guarantees to support microenterprise, but authorities seem intent on wiping out or consolidating unreliable small agribusiness operations on pretexts of maintaining food safety, disease control, quality or market "order." Without the army of micro-entrepreneurs, would China's corporate behemoths have a foundation to stand on?
Posted by dimsums at 11:06 PM