China's statisticians estimate the "summer grain" harvest--mostly wheat--at 141 million metric tons. They produced 4.5 tons (3.3%) more than last year, but China's wheat market already had a glut of the crop and demand from flour mills is weak. While an abundant harvest should be a happy event, many farmers are stuck with wheat no one will buy. 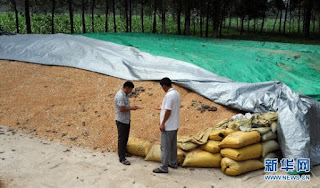 A pile of unsold wheat in China's Henan Province.

According to a report on wheat marketing progress in China, demand for wheat from flour mills is weak this year and prices are down about 80-100 yuan per metric ton from last year. The Chinese government has a price support program to buy up wheat when prices fall below the minimum set by the government. As of July 23, the government's grain reserve company had already bought 29.2 mmt of this year's wheat harvest, but many farmers have moldy wheat that even the government refuses to buy.

This year there were widespread rains at harvest time that caused kernels to sprout or become moldy in some major producing areas of south central Henan Province and Anhui Province. Most of the wheat in these areas doesn't meet the government's standard for purchasing wheat for the support price program. In one county of south-central Henan, a grain bureau official estimates that 80% of the wheat is below the standard for purchasing. Grain traders will only buy the wheat at a steep discount that farmers are not willing to accept.

In late July, one of China's large-scale grain farmers who rents 2000 mu (330 acres) in southern Henan Province had 1,000 metric tons of wheat unsold. Last year she sold all of her wheat by June 20 last year, but of this year's harvest she says, "I never thought wheat would be so hard to sell."

She has the grain stored under tarpaulins on the ground where it is vulnerable to mold, sprouting, and insects. She used equipment to dry it but the electricity cost 600 yuan per day (nearly $100). She estimates having lost 300,000 yuan on this year's wheat.

There are disputes about whether crop insurance policies cover the moldy wheat. In Qianyang County of Shaanxi Province--another region hit by widespread wind and rains at wheat harvest time--the insurance company's county manager gave his preliminary assessment that wheat insurance would cover fields where the wheat stalks had been blown down by heavy rains, but the policy doesn't cover losses from mold and sprouting after harvest.

Mr. Geng, a dissatisfied Qianyang County farmer, describes the insurance official's response to his claim as "playing with words." The county director has filed a report with his company's headquarters and is waiting for a final decision on coverage for the wheat.

Chinese officials have worked hard to prevent the "hard to sell grain" (卖粮难) phenomenon that contributed to rumblings of rural discontent during the 1990s. A Peoples Daily commentary warned that keeping farmers happy with good prices is the foundation of national food security. The commentary repeated President Xi Jinping's recent bromides about creating brands for grains, integrating grain farmers with processors, and enlarging the scale of farms. More specifically, it called for local governments to compensate farmers for moldy grain losses using money from "grain risk funds," offering "more accurate" grain subsidies with stronger guidance, and improving the crop insurance system. (The insurance company mentioned above has probably gotten a call from Zhongnanhai.)

On July 30, measures to alleviate the unsaleable grain problem were announced. Anhui Province launched a "temporary reserve" to buy wheat in targeted areas, although it is using the same quality standards as the national "minimum price" program. Sinograin, the grain reserve corporation, is sending out equipment and technicians to dry grain. The Agricultural Development Bank announced that it had allocated 130 billion yuan  ($21 billion) in credit--so-called "money waiting for grain"--to purchase this year's wheat harvest. The bank said companies buying grain should not have to issue IOUs since there's plenty of credit.

The economic slowdown in China continues to reveals the inflexibility and waste in its economic system. China has a glut of wheat, yet the government encourages farmers to produce even more of it. Authorities formulated a strategic plan to increase production of high-quality wheat 12 years ago but farmers still fail to produce varieties of wheat that are in short supply as bakers turn out more pastries, pasta, and cookies. Policies that prevent market prices from equilibrating supply and demand waste resources and inevitably lead to conflict.
Posted by dimsums at 8:10 PM