Lost in the story about China's currency devaluation this week is the country's struggle to insulate itself from global farm commodity price deflation which has been going on for nearly two years (four years for cotton and sugar). Domestic Chinese prices of grains, oilseeds, and sugar are 30-to-40 percent higher than the price of imports at current exchange rates, and the recent 3-percent devaluation of China's currency against the dollar has only chipped away at that yawning price gap.

An analysis of China's agricultural imports by its Ministry of Agriculture for the first half of 2015 shows that China's trade deficit in agricultural products shrank 20% from a year earlier. But a closer look shows a complicated mish-mash of surges and declines across various commodities. The 10% decline in agricultural import value reflects cheaper soybeans, plunging imports of edible oils, and a collapse of dairy imports. 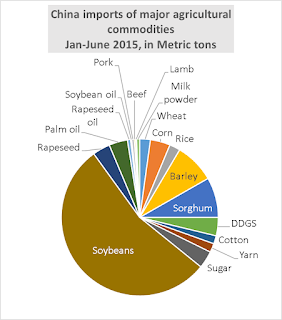 Dimsums chart based on China Ministry of Agriculture data.

China is still importing a lot of farm commodities. China imported 64 million metric tons of agricultural commodities during January-June, up nearly 10% in volume from the same period last year. This puts China on a pace to import over 120 mmt of ag commodities this year, a prospect that will prompt much consternation in Beijing. Officials there are worried about how to deal with the seemingly contradictory "three increases": increased grain production, rising imports, and record-high domestic inventories of farm commodities.

As usual, soybeans are the dominant import item, accounting for nearly half of the import volume. However, the volume of soybean imports increased only 2.8% year-on-year while the value declined 20%. China moved away from importing other oilseeds and oils. Import volume of rapeseed was down 13%, palm oil was down 14%, rapeseed oil was down 18%, and soybean oil imports were down 67%.

The second-biggest chunk of imports by volume is represented by corn and its substitutes. China imported 2.7 mmt of corn (nearly all from Ukraine and Bulgaria) in H1 2015, 5.4 mmt of barley, 5.4 mmt of sorghum, and 2.4 mmt of distillers dried grains (DDGS), a total of nearly 16 mmt. (The MOA analysis neglects to include 5.9 mmt of cassava imports--another corn substitute.) Imports of Ukrainian corn doubled from last year and sorghum and barley imports more than doubled as feed mills sought cheaper alternatives to expensive Chinese corn. However, imports of DDGS were down 24%. Officials are eyeing these imports as they worry about how to clear out their massive inventory of domestic corn with another huge corn crop on the horizon.

Rice and wheat imports were modest in comparison--each was only 1.4 mmt during H1 2015. The modest volumes are due to limits imposed by tariff rate quotas. Demand of high-quality imported wheat is robust and prices are high. A rice market analysis by Farmers Daily reports that domestic rice prices are still under pressure from cheaper imports even though stronger enforcement efforts had curtailed smuggling along the southern border. Farmers Daily expects most of the recently-harvested early rice crop to be sold to the bloated government reserve.

Cotton imports during H1 2015 were down 29% from a year earlier. Chinese authorities pledged not to allocate any additional "sliding scale" cotton quota this year as they try to whittle down those inventories as well. The volume of imports of over 1 mmt exceeded the tariff rate quota for the year. Despite the decline in Chinese cotton prices, China's textile industry increased its imports of yarn by 20% to 1.2 mmt.

The world dairy industry--eager to hitch its wagon to surging Chinese demand--is not pleased that China's milk powder imports were off 43% in H1 2015 from a year earlier. Lamb imports were also down 24%. However, pork imports were up 7% despite a severe decline in domestic pork output during H1 2015. Beef imports were also up 18%.

Thank you for the excellent information and facts, this was a very good piece of writing.
agri Commodities

Thank you for sharing this wonderful blog. Keep sharing these kinds of blogs.