In 2011 China introduced a price floor policy that was intended to "stabilize" the cotton industry. Instead, it may have sown the seeds of the industry's demise.

This blog has reported on the cotton fiasco several times over the past year: the mountain of cotton last December, tangled cotton policy in October, and the surge in cotton reserve purchases in 2011. Authorities bought about half of the 2011 cotton crop and have bought about 80 percent of the 2012 crop to stockpile in reserves. The domestic cotton price is about 60 percent higher than the international price. Auctions of stockpiled cotton from past years were held in January but less than half of it found buyers. Textile companies are using imported cotton, chemical fiber, imported yarn, are short of cash, or shutting down for an extended period ahead of the Chinese new year holiday.

China's price floor policy was intended to "stabilize" the industry by giving cotton producers and textile enterprises more certainty about expected prices. The February 4 Peoples Daily referred to it as "straightening" prices by preventing big swings. The policy is predicated on the notion that market price fluctuations send "wrong" signals to producers that are destabilizing. The alternative is to use a "cost-plus" pricing strategy that raises the price floor every year by adding a "reasonable" profit to the cost of production.

In 2011 they set a price floor when global cotton prices were sky-high. By the time the 2011 cotton harvest came around, global prices were less than the Chinese price floor. In the economic planner's perfect world, the low cotton prices would have been a temporary phenomenon. They would have stockpiled cotton during the period of low prices and then sold it back into the market when prices bounced back the following year.

That didn't happen. Global cotton prices went even lower in 2012 and China stockpiled even more cotton. They now have around 10 million metric tons (mmt) in storage. By comparison, this year's production is estimated at 7.4 mmt. According to the Peoples Daily, at the end of 2012 imported cotton cost 13,000 yuan per metric ton and Chinese cotton cost 19,000 yuan. In February 2013 there is no sign of cotton demand bouncing back and no prospects for global prices to converge with Chinese prices. 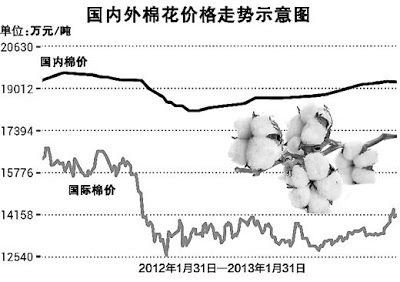 Chart from Peoples Daily showing China
and international price of cotton over the past 12 months.


A magazine article in Liaowang News Weekly reported on the cotton conundrum. They report that the differential between Chinese and international cotton prices widened from 3000 yuan in 2011 to as much as 6000 yuan. Textile companies can manage a differential of 2000 yuan, but lose competitiveness when they have to pay more than that for raw materials.

The cotton "market" has become disjointed. In Xinjiang--which accounts for half of China's production--the government is the only customer. A private trader reports to Liaowang that virtually all cotton business this year is trading government reserves.

A cotton industry expert from South China Agricultural University calls the cotton reserves "a test of the government's financial ability." He estimates that the government will spend 170 billion yuan on purchasing reserves, interest, and management expenses.

The government seems willing to prevent a decline in cotton production at any cost. Another expert from a cotton industry institute in Xinjiang describes the government as "overwhelmed by the financial pressure of the reserves." But, the expert says, "If they don't purchase [the cotton], the market will fluctuate, impoverish  farmers and reduce cotton production."


The interests of cotton farmers and textile enterprises--historically aligned--are now at odds. One cotton industry representative said of the high floor price for cotton, “Farmers interests need to be protected, but the textile industry also needs protection." He went on to argue that, in effect, the protection of farmers will be of no use if textile companies are driven out of business by expensive cotton.


The Xinjiang expert warns that the cotton industry is at a critical juncture. If the cotton reserve corporation sells the cotton at international prices it will take a huge loss. If the reserves are sold into the domestic market, it will depress cotton prices and discourage production, exactly what the price floor was intended to prevent.

In the Tarim basin of Xinjiang, cotton reportedly is being stored outdoors "like mountains" because there is no space in warehouses. Bottlenecks (and perhaps expense) prevent it from being transported out of the region. More cotton keeps coming into reserves and not much goes out.

An official at the National Development and Reform Commission (NDRC)--which sets these policies--doesn't seem to have any idea what to do. He was quoted by Liaowang with this pithy analysis: “The cotton temporary reserve faces two choices: the price needs to be a little higher to stabilize cotton production; but considering the competitiveness of the textile industry, not too high.”

Usually the NDRC announces the price floor for the new year around March. In the last two years, they set the cotton price floor at 10 times the support price for wheat. A 9.8 percent increase in the wheat price has been announced which implies an even higher cotton price in 2013 if they follow this practice again. That would make it even harder to dispose of the cotton stockpile and force authorities to buy even more cotton this year.

The cotton industry association conducted a planting intentions survey for 2013 which showed that one-third of farmers intend to reduce cotton plantings this year, against 12 percent who plan to increase. Eleven percent are undecided, waiting to see how market conditions and policies fall out. The association estimates a 4.5-percent decrease in cotton area based on these numbers.

Officials are giving no signals as to what they might do. They worry that a decrease in price might lead to a sharp decline in cotton output. Although there is no mention in Liaowang, another risk is unrest in Xinjiang. However, Xinjiang farmers seem pretty satisfied--88 percent say they will plant the same area in cotton this year. This is in stark contrast to the Shandong-Hebei-Henan region where 41 percent of farmers say they plant to cut cotton plantings this year. These numbers suggest that China will continue to build its mountain of cotton in the Xinjiang desert, a thousand miles from the nearest clothing factory.

Officials set the cotton price floor based on the notion that markets send wrong signals. The corollary is that government officials are better than markets at setting prices. However, the officials seem to have been caught by surprise by the decline in cotton price in 2011. Who would have thought record-high prices in 2010 would stimulate production around the world and send prices crashing down in a tepid demand environment?

Officials in China apparently thought thought the decline in demand for cotton would be a temporary phenomenon. However, their policy may make it permanent. Elevated cotton prices in China discourage cotton use and reduce the odds that demand will ever bounce back. High cotton prices encourage textile enterprises to import yarn, substitute chemical fiber for cotton, or move overseas. Given China's declining competitiveness in textiles these changes may be permanent and there may never be an opportunity to dispose of the mountain of cotton accumulated over the past two years.

Markets are right more often than government officials.
Posted by dimsums at 10:06 PM