China's cotton market is the most extreme example of an emerging divergence between Chinese and international commodity prices that is likely to create confusion in agricultural trade. As Chinese production costs rise steadily, Chinese policy makers are ratcheting support prices upward. The Chinese currency has also been appreciating, pushing Chinese prices higher. At some point China's prices will rise above world prices, leading either to a flood of imports or a retreat from China's free trade stance as a WTO member.

In 2011, China introduced a price support program for cotton. At the time, the support price seemed irrelevant since market prices were about 30% above the support. The cotton market was still in a period of sky-high prices but few people anticipated how fast world cotton prices would plummet last year. By the time China's cotton harvest arrived in September 2011, market prices were far below the support price. Purchases to support the cotton price during 2011/12 totaled 3.1 million metric tons (14.2 million bales)--nearly half of last year's crop. According to one industry report, the government's Agricultural Development Bank of China made loans of 70 billion yuan (over $11 billion) to fund purchases of over half last year's cotton crop.  The Chinese cotton that was not purchased at the support price was largely poor-quality stuff that couldn't meet the government's standard. In order to get decent cotton, textile enterprises had to import it. China's cotton imports exploded to 5.4 mmt (24.5 million bales), more than half of world cotton trade during 2011/12.

For 2012/13 the National Development and Reform Commission raised the price support to 20,400 yuan per metric ton, 600 yuan higher than the previous year. The 2012/13 cotton support program began September 10 and will run through August. Chinese prices are still far above world prices and large volumes of cotton are being added to the reserve stockpile. An NDRC official said that government reserves are at a record-high level, straining storage capacity. (He said the China National Cotton Reserve Corporation has about 4 mmt of storage capacity.) NDRC estimates that this year's cotton crop is 300,000 mt (4.2-percent) less than last year, but the supply of newly-harvested cotton exceeds the demand for it.  From September 10 to October 15, another 841,100 mt had been added to cotton reserves from the new harvest.

A recent commentary described a perverse three-stage process that draws cotton from low-price to high-price locations. The highest price is paid for Chinese cotton stockpiled in reserves. The high support price sucks cotton out of the domestic market where prices are less than the support price. This creates a vacuum that is filled by cotton imported from the world market where cotton prices are lower still.  Thus, cotton bought at high support prices accumulates in warehouses while imports dominate the market. 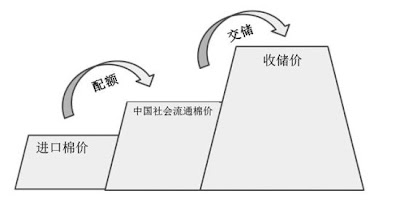 Demand from Chinese textile producers is relatively weak, due to the world economic slow-down and the erosion of their international competitiveness due to appreciation of the Chinese currency, Chinese textile manufacturers' high raw material (cotton) costs, and rising labor costs. A recent industry report said that China's small and medium textile manufacturers are under mounting pressures from soaring wages and rising energy prices, and many are short of cash.

Farmers are said to be pessimistic about planting cotton despite the higher support price. According to a report from Shandong, a farmer said that seed, fertilizer, labor and other costs total 1400 yuan per mu (about $1350 per acre) and gives a net return less than a third of what he can earn growing winter wheat followed by summer corn. Cotton also uses more labor, an important consideration since so many farmers are working off-farm. Moreover, the cotton price fluctuates more than grain prices and there is a risk that the crop will have to be sold at a low price if quality is degraded by heavy rains and lodging experienced in many areas. The Shandong Agriculture Department says cotton area has fallen five years in a row in their province.

As cotton production falls in eastern provinces, it is becoming concentrated in Xinjiang, in China's far northwestern corner. Chinese officials built up a cotton industry in Xinjiang during the 1990s to expand the domestic supply, and the region now accounts for roughly half of China's cotton output. This is another costly fiasco. Xinjiang's cotton price exceeds the price in eastern China, and Xinjiang accounted for 80 percent of cotton purchased under the price support program (648,000 mt) so far this year. A Xinjiang farmer reports his production cost is 1714 yuan per mu--higher than the Shandong farmer's 1400 yuan--and he complains that labor costs 1000 yuan, including food and housing and train fare back home after the harvest.

Xinjiang's expensive cotton also requires subsidies to transport it thousands of miles across the country to the east coast where most of China's textile mills are located.  During the first nine months of 2012, 3 million metric tons of Xinjiang cotton was transported out of the region--essentially the entire crop. The 12th five-year plan calls for raising the transportation subsidy from 400 yuan per ton to 500 yuan. (During the first nine months of this year, 3 mmt of cotton was transported out of Xinjiang, a total subsidy of 1.2 billion yuan or $190 million.) Yarn spinners in Xinjiang are also subsidized and the plan calls for extending the subsidies to cloth manufacturers.

The NDRC official said that the government will do all it can to maintain farmers' enthusiasm for planting cotton. One of the concerns is that purchasers will refuse to buy cotton or discount the price based on quality. Authorities have issued orders to strictly prohibit any such downgrading or refusals that would make it hard for farmers to sell their cotton at a good price. 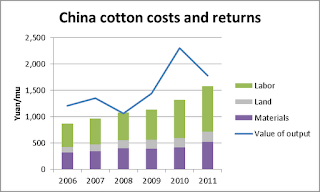 China's rising costs put an ever-rising floor under agricultural commodities. With costs rising about 10 percent a year, Chinese prices are bound to rise above world prices. Cotton is the most extreme example. We see shadows of this process in other markets like pork, rapeseed, and early indica rice. If the United States has normal weather next year and grain prices plummet we could see the cotton phenomenon duplicated in corn, soybean and wheat markets.
Posted by dimsums at 9:28 PM

So what exactly will the govt do with all this cotton that it has stockpiled at higher prices? Will it offer it to industry at subsidized rates? I might be sounding pretty stupid here, but I cant seem to understand the economics of this strategy!

No one has explained that. Like many Chinese strategies, it is a short-term band-aid solution. They feel they need to keep the cotton price up so farmers will keep planting cotton. Maybe they hope the cotton price will bounce back sometime and they will be able to sell it off. The government just finished selling off soybeans it bought up in 2008-09.