One Beijing blogger posted an essay, "Who Sold Out My Nostalgia," despairing over his village's exchange of work in the fields, trees and ponds for piles of cash, concrete buildings and empty leisure time.

The blogger arrived in his home town for the new year and found none of the animals, fields, trees and ponds he remembers from his childhood in the village over 20 years ago. The village is now little different from the endless concrete buildings, factory yards and broad streets that cover Beijing. 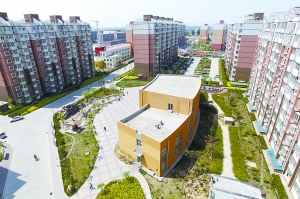 "The villagers are still here, but the village is not," writes the blogger. His family and friends had their land occupied by high-rises and factories. They received big wads of cash -- as much as 1 million yuan -- in compensation for their demolished houses and now they live in big housing complexes just like city people.

The blogger despairs over the villagers' existential crisis. They have money to spend now, but no purpose.  The blogger sees friends and relatives engaged in a treadmill of gambling, womanizing, and fitful sleep. No goals, no future, "Just scum with no spiritual pillar playing games," writes the blogger. The main activity in the village is high-stakes games of mahjong and dominoes. People routinely lose 20,000 yuan in the popular domino games. 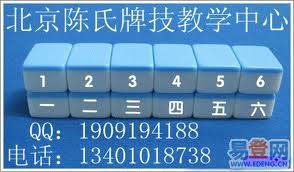 Ad for a "training center" for playing Beijing domino games

The symbols of wealth "contaminate" the blogger's nostalgia for the countryside. A parade of expensive cars -- the first expenditure villagers make after getting compensation for their demolished home -- come and go in the village. A lady standing in line at the bank ahead of the holiday comments to her friends about the large sums of money spent on the holiday these days. Each family feels obligated to serve 20 courses at new year meals--any less would be an embarrassment--but less than half of the food is eaten.

No one smokes cheap 10-yuan-per-pack cigarettes. All the young men smoke expensive Chunghwa or Jade Creek brands. Two relatives had an altercation when one offered the other a cigarette. The man turned down the cigarette, complaining that only migrant workers smoked that kind.

One young man was given a job as a security guard after his family's land was taken by an apartment building. His monthly salary is 1000 yuan but he spends 2000 yuan, presumably getting the extra money from his parents. 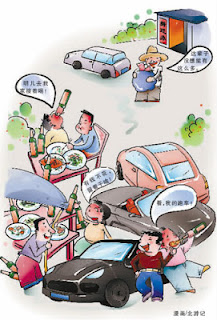 The blogger worries that giving farmers compensation for their land may give them fleeting riches, but leads them into an ugly trap. He compares the compensation payments to opium. They have no work, no entrepreneurial spirit. The demolition of their houses also demolished their honesty and industriousness, replacing it with alienation.

Once a farmer, always a farmer, writes the blogger. If farmers are not given technical skills, a job, a way to make a living after losing their land, their future is "frightening" and "an unpredictable disaster."
Posted by dimsums at 10:32 PM