The December 2012 scandal about drug use in "quick chickens" was a reminder that Chinese consumers are unable to trust the supply chain that delivers their meat. The news media recently carried several reports about direct arrangements in which consumers commission farmers to raise a pig using traditional "backyard" methods that raise pigs at a much slower rate than common commercial methods.

In a story from Sichuan Province, Mr. Yang made the 70-kilometer trek to collect the meat from a pig he commissioned a farmer to raise for him using only grains. The pig grew to just over 50 kg in nine months. The farmer raised another group of pigs from the same litter to the usual slaughter weight of 100 kg in three-and-a-half months using commercial feed.

The farmer said these "grain pigs" require 5 kg of feed per kilogram of weight gain, more than the usual 3:1 ratio. He said the production cost is two-thirds higher than that of pigs on commercial feed. Mr. Yang spent 40 yuan per kg for the pork, plus 100 yuan for gas to get to the farm. The farmer said he still didn't make money on the "grain pig" and certainly wouldn't raise pigs in this manner unless he had a special order for them. From one litter of piglets the farmer raised three as "grain pigs" for Chengdu residents and seven using commercial feed. 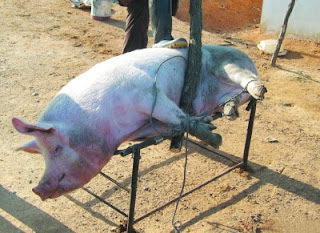 A "new year" pig on order awaits his fate in the Liaoning countryside.


Another article describes a pair of migrant workers who returned to their village in Chongqing to set up a business venture producing "grain pigs" on a much larger scale. (Articles on returned migrants setting up pig farms appear regularly as part of a government campaign to encourage migrants to return to their villages to set up businesses.)

Mr. Huang, 30 years old, worked as a taxi driver in Dongguan and invested 1.2 million yuan in the farm. Huang is in charge of management and sales while his partner, Mr. Zeng is a veterinarian with the technical know-how. Their farm covers 28 mu (about 4-and-a-half acres) and has separate areas designated for breeding animals, sows, piglets, and fattening hogs. Normally the farm has 12 employees.

The farm rented a couple of acres to grow alfalfa as feed for the pigs. He estimates that each mu (one-sixth of an acre) can produce 20,000 kg of fodder which grows back in 15 days. Huang's "grain pigs" consume 4 kg of fodder and 3.5 kg of grain daily. With over 1300 piglets, the farm has to spend 5000 yuan per day, putting them under a lot of pressure.

Mr. Huang plans to apply for a government-sponsored microenterprise loan of 150,000 yuan to set up a record-keeping system. According to his plan, each pig will have a certificate recording its pedigree, immunizations, feed, slaughter and transportation so consumers can be assured of the pork's provenance and safety.

They have plans to set up a slaughter and processing facility and to organize a cooperative to involve local farmers in the venture. Eventually they hope to increase production to 10,000 head annually, sign long-term marketing contracts with supermarkets and restaurants, and register their own "grain pig" brand (all of these are strategies pushed by the government).

Mr. Huang said their first batch of 500 pigs slaughtered in 2011 and made a tidy profit equal to a couple thousand dollars. During 2012 the price went down and the profit on 1000 pigs slaughtered was less than the previous year. Mr. Huang studied up on business practices and expressed the constant worry about risks due to market fluctuations.

An article about "new year pigs" in Dalian says these are not "quick pigs" (a reference to the recent poultry drug incident), but highlights the difficulty of establishing a market for these pigs. Some city residents order a pig for the new year in May and will come to collect it in January. The reporter says that this year food safety concerns have prompted a commercial exchange in Dalian and production areas to set up record-keeping systems that give consumers assurance about the safety of the pigs they order.

According to the article, quite a few Dalian citizens would like to go to the countryside to get a pig, but they have no marketing channel. There are some food shop networks and buying clubs that act as intermediaries and a few farmers in remote areas with good environmental conditions are contracting directly with city people to raise a pig for them. These buying clubs have about 200 members each. Four to six people can go in together to buy a pig.

The article says most "grain pigs" in Liaoning are raised by elderly people, usually 3 or fewer in one farmyard. Most pigs raised in this manner are eaten by farm families themselves when their children come home for new year or they are sold to neighbors in the countryside.

Like other products, there are problems with fakes. There have been some instances where farmers bought common pigs and resold them as "grain pigs."

This phenomenon of selling pigs directly to urban residents combines tradition--"backyard" pig-raising and new year traditions--with the lack of trust that characterizes China's new 21st century urban society. It is similar to other budding attempts to eliminate middlemen--garden plots and a community-supported agriculture movement imported from Japan and the U.S., a campaign to encourage supermarket chains to buy directly from farmer cooperatives, and food shops and sales counters that offer food purported to be supplied directly by farmer cooperatives. These explorations reveal the anxiety many Chinese urban residents have about their food and the difficulty of establishing mechanisms for building trust in food supply chains in a newly-urbanized society. 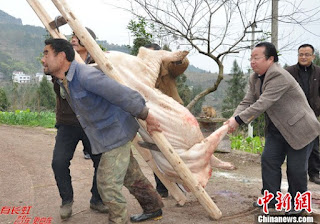 Villagers in Chongqing prepare a pig for the new year.