Rice: Government Says "Up" With the Price 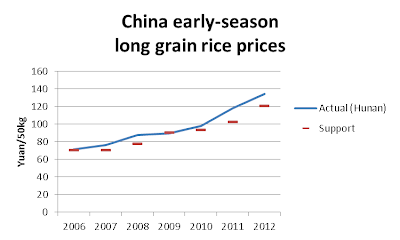 This year the Chinese support price for early indica rice was raised 17.65% from 2011. That followed a 9.7% increase last year. A Futures Daily article this week speculated about how much the price will be raised for next year. Despite big increases the last two years and a recovery in production, officials still worry that farmers are not inclined to plant the early-season rice (planted in early spring, followed by a second rice crop in the summer) because it takes a lot of labor and brings a lot less than working off-farm. Officials also worry about the relative prices and returns of different crops and a 9.8-percent increase in next year's wheat support price was announced earlier this month. Some people in the industry think the early rice support price will need to be raised even more than the wheat price.

While officials are worried about raising the price to induce farmers to keep growing rice, lower-priced imported rice has been making inroads in the Chinese market for the first time since the 1990s. Usually, Chinese rice imports are exclusively high-end fragrant rice from Thailand, but this year customs statistics show that China has imported 1.88 million metric tons of rice from January to August of 2012, mostly from Vietnam and Pakistan. Traders in Yunnan say another 1 million metric tons not counted in customs statistics has entered China from Southeast Asia. The imports are mostly low-priced, low-quality rice that competes against early indica rice, historically a low-quality rice shunned by most Chinese consumers.

With cheaper imports available and another record fall rice crop about to be harvested, the market for early rice is limited. Its role is largely to fill up reserves. (A decade ago, rice reserves were overstocked and the government canceled its "protection price" for early rice.) The Futures Daily writer says that in the short term the early indica rice price will be under downward pressure. Yet officials will feel obliged to give another double-digit boost to the support price to "send a signal" to producers. The market says "down," the government says "up," and "up" it will be.

Perhaps we are seeing the beginning of the unraveling of China's free market agriculture experiment.
Posted by dimsums at 10:29 PM