A couple of weeks ago, an article about chaos in pork slaughter in rural areas. It seems that this also happens in one of China's wealthiest cities under the noses of inspectors.

Reporters for the Yangcheng Evening News uncovered a underground pig slaughtering operation in downtown Shenzhen. The reporters traced the pork from the wholesale market in Shantou to the retail market, following trucks to the source of the pigs and watching men carry the illegal pork into the market in plastic bags under the noses of market inspectors. The results of the investigation are troubling for Shenzhen residents, but they also cast doubt on China's food safety measures.

This is nothing new. Illegal slaughterhouses and sale of sick or dead pigs has been a problem for years. There is a system in place that is supposed to prevent such things from happening, but it is possible to evade enforcement without too much trouble since the enforcement is not very good.

Here is a summary of the investigative report from Yangcheng Evening News. The report is very detailed and meticulous and lengthy, but worth reading to see how unscrupulous rings of traders can evade inspectors. 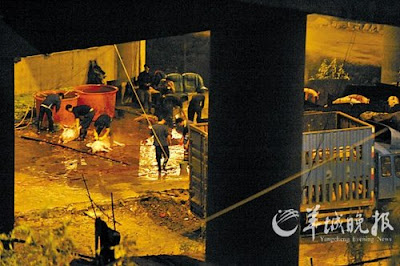 On March 6, readers called the Yangcheng Evening News to report that there was an underground slaughterhouse below the flyover at the intersection of Lucky Dragon and Honey Lake roads. At 11:24 that night the reporter went to the place and found it quiet. He followed Xiaoshan road to look under the bridge and saw a truck parked there. On the ground was a vat and pig manure was on the small road. As the reporter entered Yanshan road, he saw several people hidden among the trees.

At 2 am the reporter returned and saw a procession of trucks entering and exiting. The grunting of pigs could be heard coming from some of them. One person said the trucks contained sick or dead pigs, and said as many as 200 pigs are butchered here every night. 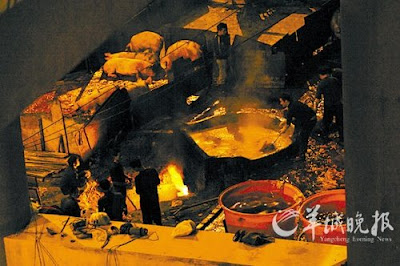 There were about a dozen men on both sides of the Xiaoshan road and they seemed wary of the arrival of the reporter’s car. The reporter found that there were two butcher operations hidden among the trees and heard squealing pigs.

About 1 am on the night of March 12th, the reporter staked out a point where he could watch the butchers. He saw a large vat with a fire underneath it and two red plastic tubs filled with water. On the ground there was a lot of waste water and blood. On another side of the vat was a wooden pen containing seven or eight pigs, some pigs lay still on the ground. Three men were busy working. There was a pool of water about 10 meters from the vat, and next to that a hair removal machine. There were four carcasses lying on the ground next to it.

At 1:31, one man was sharpening a knife on a stone while another brought a pig from the pen, and it was butchered as the reporter watched. A man carried the pig to the vat, leaving a trail of blood. After leaving the pig in the water for some time, he pulled it out and laid it on the ground. Another man came to remove the hair. About five minutes later, the slaughter was complete and the carcass was loaded on the truck.

At 2:13 am, a truck pulled up to unload pigs. Of the 8 or 9 pigs, two lay motionless in a corner of the truck. About 20 minutes later a man pushed the pigs off the truck and they were lying on the ground. These pigs made no sound as they were butchered.

During the hour the reporter watched, the men butchered nearly 20 pigs. When the reporter returned at 5:46, the men were packing up their equipment and leaving.

Each night many trucks delivered pigs to be butchered. On March 15, the reporter tracked the truck with license plate Guangdong BGW717 to Huizhou’s live hog market. The reporter saw the truck stop at a market stall where the driver talked briefly with the seller. After loading the pigs, he drove the truck to a dark corner where he opened the door and two men loaded two more pigs on the truck.

The reporter recorded the license numbers of the trucks going in and out. In less than half an hour, 40 trucks with license plates beginning with B were recorded, including the B82W82 truck seen at Lucky Dragon Road slaughter house in Shenzhen.

The reporter followed a truck to the underground butchers in Shenzhen. Half an hour later, the pig carcasses were then delivered to Shenzhen’s Futian wholesale market. No one stopped the truck during this process. The requirements that pigs entering Shenzhen from outside have to be inspected and meat sold in the market must go through inspection and other procedures are empty air.

During the night on March 12,reporters were posted at various intersections to track the trucks leaving the illegal slaughter point. At 2:00, a truck with BGW717 license plate came out of Xiaoshan Road, and the reporter sent the license number by cell phone to his colleagues waiting at various places. One reporter saw this truck approaching the Futian wholesale market. The truck stopped about 200 meters outside the market. Two men approached, and unloaded 5 or 6 hog carcasses and began cutting them up. More and more trucks delivered pork, and both sides of the road were lined with men cutting it up.

At 3:30, the reporter entered the meat section of the market. A truck from a [legitimate] meat company was parked at the entrance, and each vendor unloaded one carcass from it. An inspector was there to issue inspection certificates. These vendors use small carts to deliver the carcasses to their stalls where they cut them up further.

Meanwhile the underground butchers’ meat outside the market had quickly been cut up and placed in plastic bags. One man walked toward the market carrying two bags, and placed them on a cart near the entrance. After several such trips, a man came from inside the market and pushed the cart to the rear of stall no. 35. The vendor at that stall pulled pork out of the bag and placed it on the counter for sale. In this way, two entire carcasses are brought into the market two bags at a time, like ants moving a house.

At about 5:00, the reporter saw that all the underground-butchers’ meat out side the market was gone. At about 6:00, meat stalls started their sales. This whole process was carried out under the noses of the market security persons, but no one inspected or checked the underground pork.

One knowledgeable person from a [legitimate] meat processing plant said illegal pigs can evade market supervision. Some pork gets inspection certificates by false pretenses. An enforcement person from the bureau for the district heard the reporter made unannounced visits to the underground butchers and acknowledged that there were 3 or 4 underground butchers and their intricate network, but said enforcement is hard.

If reporters can find the holes in the pork inspection system, why is it so hard for the inspectors?
Posted by dimsums at 8:48 PM