I have been unsure how to translate the Chinese word 宣传, usually translated "propaganda," but I've also seen it translated as "publicity" or "advertising." I started thinking about this a couple of years ago when I noticed a crossing guards trying to bring order to crosswalks in Beijing with armbands labeling them as part of Beijing's traffic "propaganda" program.

The role of propaganda in China's strategy is emerging as a concern as China tries to project a better image of itself. A Washington Post article this week describes China's efforts to set up radio stations and newspaper presence in the U.S. China's "Confucious Institutes" promoting Chinese language instruction in the United States have raised suspicions of darker motives among some parents in California.

According to the Post article, "The stations don't broadcast outright propaganda, but rather programming with a Chinese focus and flavor..." The Chinese communist party's more subtle/sophisticated approach to "propaganda" seems to reflect the emphasis on "agricultural propaganda" in a national video conference held April 26 in Beijing.

Minister of Agriculture, Han Changfu, exhorted 600 attendees from agricultural departments to follow General Secretary Hu Jintao's "hold high the banner, focus on the overall situation, serve the people, be creative in reform” in resolutely carrying out agricultural propaganda work. The speech was littered with so many communist party buzz words like "enthusiastically," "scientific," "three rural," and "grasp" that it was almost incomprehensible. 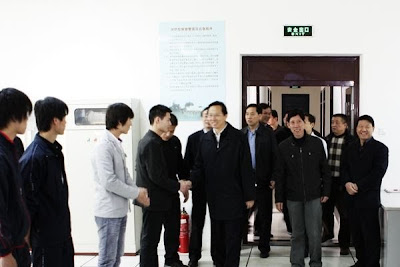 After filtering out the nonsense, the message of Minister Han seemed to be that agricultural officials need to both be aware of public opinion and try to shape it. He said agricultural officials are faced with a new test of learning how to utilize new media like web sites and mobile phones to disseminate information and to track public opinion. Instructions were to promote rural policies through the media and pay special attention to how agricultural disasters are portrayed. (Lately web sites have been packed with articles about how government offices are helping the southwestern drought area and the Qinghai earthquake zone.)

The propaganda may reflect some insecurity on the part of the government, vulnerable to criticism over disaster response and a population that is not as content as one would expect given 11% GDP growth.

An article about Shaanxi Province's hog sector policies is an example of how propaganda is used. The sixth component of policy was to "strengthen propaganda guidance," which included utilizing the provincial newspaper and TV station to "strengthen positive publicity and guide hog farmers and enterprises rational response to market changes." It also included less Orwellian tasks like publishing information on prices and market dynamics.

"Propaganda" or "publicity"? Or is it the same thing? All governments use propaganda; perhaps what makes a difference is if there is a free media that allows alternatives to the government's message to be published.
Posted by dimsums at 7:31 PM