This is a feel-good human interest story for the Chinese New Year holiday from a small-city newspaper that offers a window into the life of a rural migrant/entrepreneur. I was looking for something else when this story caught my attention. 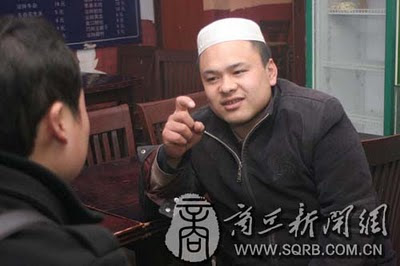 Mr. Ding's photo from the Shangqiu Daily Newspaper
Mr. Ding Ximai was born in a village in Gansu Province. He's a member of the Hui ethnic minority--a Chinese muslim whose ancestors may have come across the silk road from the middle east centuries ago. At the age of 14, having finished primary school he faced grim prospects in an area where each family has an average of one mu of land per person (1/6 acre) and there are few other jobs. Like many others in his village, he left for Lanzhou, the provincial capital. Lanzhou is known for its "pulled noodles" usually served with beef. He got a job washing dishes in a noodle shop and after a year took off to wander the country as a purveyor of the famous Lanzhou pulled beef noodles, opening shops in Sichuan, Shandong, and Jiangsu Provinces.

Eighteen years later, while running a shop in Yangzhou (a mid-sized city in southern Jiangsu), he got a call from a friend from his village who told him that he should go to Shangqiu, a small city in Henan (near where Henan, Shandong, Anhui, and Jiangsu provinces come together). His friend said business is good and people are nice, so he gave it a try. You have most likely never heard of Shangqiu--and have no reason to--but dozens of photos posted on google show a big city with lots of new construction, bright lights, and giant sculptures.

Mr. Ding came to Shangqiu and rented a two-room shop of 80 square meters for 1800 yuan per month. It's in the downtown business district next to the "Dennis" shopping mall. Amazingly, a google map of the city turns up a photo of the street (see below). 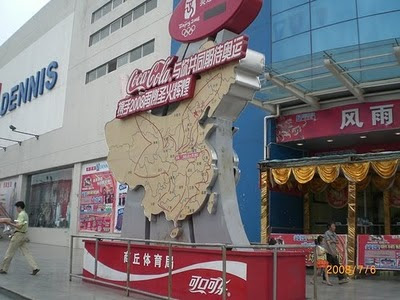 The street where Mr. Ding's Lanzhou Pulled Noodle shop is located in Shangqiu. See the Dennis sign in the background?
Mr. Ding found that Shangqiu was just as his friend had told him. Business is good--he can clear 9000 yuan a month generally. He has been able to build a two-story house. He says the people are polite to him, no one has tried to over charge him, and the customers don't argue over their bills. A local master chef gave him four months of cooking lessons. He thinks the local people are nice to hime because they realize he's an outsider and it's hard to do business locally. Mr. Ding is so pleased that he has encouraged about a dozen other people from his hometown to set up Lanzhou Pulled Noodle shops in Shangqiu (the city's name translates as "Commerce Hill") and they are all doing well.

He's been away for two decades, but Ding has a wife and two school-aged children back in his home town. He sends money home every month to support them and his aged parents. He stays in Shangqiu during the holiday. Business is especially good then because the other restaurants close down. He generally goes home for a visit twice a year--once after the holiday and again some other time during the year.

When asked what his greatest hope is--business or family, he sort of answers "both." He says his top priority is to expand his shop so he can make more money. The more money he makes, the more he can send home. He tells the reporter that his older brother who went to university (leaving no money for him to go to school?) now works overseas and sends lots of money home. His brother's kids are able to go to good schools and have good prospects. This is what Mr. Ding aspires to. More money, for the family.
Posted by dimsums at 6:51 PM