Record snowfall across northern China this week is the latest in a string of unusual weather events in 2021. A report in China Grain Net raises concerns that the heavy snow could impact this year's corn marketing. 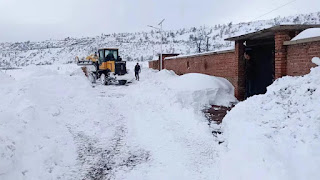 With northeastern China already under a cold wave, snow began falling November 5 and continued for days. The storm was expected to let up by November 12, with temperatures rising above freezing in parts of Liaoning Province. The snowfall has broken records kept since 1951.
The snow comes at the end of the corn harvest and in the early part of the marketing season for the corn crop in northeastern provinces--China's main corn surplus region. Snow and ice have closed down many roads, disrupting transportation of corn from the northeastern provinces to other parts of the country. The prospect of tighter supplies nudged prices upward. The May futures contract for corn on China's Dalian exchange rose 0.7% to RMB2734 per metric ton.
The snow also threatens to degrade the quality of the corn crop. Melting snow could raise the moisture of corn piled in farmers' courtyards, promoting growth of mold.
A notice issued by Jilin Province's grain bureau instructs corn trading companies to go door to door buying corn, offer corn-drying services, and store grain on farmers' behalf to hasten sale of the corn crop and preserve its quality.
China's National Weather Center predicts more severe cold weather for January and February with high precipitation in northern provinces and low precipitation in the south. Widespread cold and snowfall in northeastern provinces could add more disruptions to grain marketing. Farmers have been advised to take into account possible weather disruptions when deciding when to sell grain.
Posted by dimsums at 8:52 PM