A global network of high-standard free trade areas is one of the components of China's 14th five-year plan. A recent Farmers Daily article by a staff member at the agriculture ministry's trade promotion center explained the strategic role of agriculture in China's pursuit of regional free trade agreements (FTAs). The article appears to be part of a flurry of articles aimed at boosting China's ambitions to join the RCEP agreement set to take effect next year.

The author explained that FTAs and the multilateral trading system are two wheels of the globalized economy. In 2002, China began negotiating its first FTA with ASEAN, the southeast Asian trading bloc--immediately after joining the WTO. By the end of 2020 China had 19 FTAs with 26 countries and regions. Agriculture plays an important role in China's FTA strategy, the author claimed.

Agriculture has generally played a relatively minor role in China's FTAs. A perusal of China's FTA partners listed on a special FTA section of the Ministry of Commerce website includes many countries like Mauritius, Maldives, Georgia, Bangladesh, Switzerland, South Korea, and Iceland that are not major agricultural exporters. Similarly, other FTAs being negotiated include countries like Sri Lanka, Israel, Norway, Moldova, and Panama that are not known as food exporters. The Phase One agreement with the United States is not mentioned, nor is the U.S. mentioned even as a prospective FTA partner. Canada is the only major ag exporter listed as an FTA under study, but farm exporters Brazil, Ukraine, Argentina, and Russia are not on the list.

The author explained that China has used several different strategies for farm commodities in FTA negotiations in view of agriculture's role in national food security and boosting incomes of rural people.

Two big agricultural exporters that do have FTAs with China are Australia and New Zealand. The author explained that China carefully guards agricultural interests when making deals with agricultural exporters who view access to China's market as a major objective. The author said that 20 rounds of negotiation with Australia were drawn out over 10 years with dozens of technical consultations. China struggled to exclude sensitive commodities like grains, cotton, oilseeds, and sugar from tariff cuts. Tariff cuts for wool, beef mutton and dairy were stretched over a longer phase-in period and protective measures were added. For less sensitive products like fish, shellfish and fruit, China granted Australian proposals to speed up tariff cuts.

While not mentioned in the article, dairy products, fruit, and fish from New Zealand, Chile and Peru have gained greater access to China's market with tariffs cut to zero over about seven years by FTAs.

In contrast, China's opportunities to export agricultural products was a chief benefit of the FTA with South Korea. The author said China's industry was vulnerable to competition from South Korean manufacturers of items like automobiles and petroleum. He said China stuck to its strategy of balancing overall interests in trade negotiations by balancing benefits from agricultural exports to South Korea while using leverage to reduce South Korean demands for opening industrial markets.

In China's ASEAN FTA, agriculture played a role as demonstration role as a sector targeted for fast-track tariff reduction through an "early harvest" agreement that cut tariffs on agricultural products faster than tariffs on industrial and consumer goods. Vegetables, fruit, and aquaproducts saw rapid growth in the early years of trade with ASEAN. China's imports of fruit are probably the biggest component of this trade. China's rice imports from Southeast Asia were slower to take off, but they also boomed in the last ten years. China cut its out-of-quota tariff on rice from 65% to 50% for ASEAN exporters. China's tariffs for broken rice are now just 5% for ASEAN countries and the MFN tariff is 10% for other countries.

It's no surprise that China carefully manages its FTAs to protect agricultural interests. This is not unfettered free trade. FTAs must consolidate China's food security, ensure core points and interests in agriculture, and satisfy both parties' basic interests, the author said. 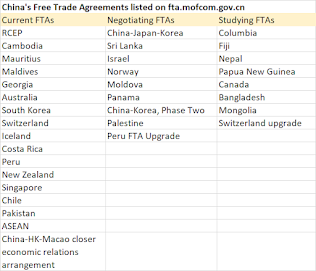 Movers and Packers in Dubai

Movers and Packers in Dubai