China's latest survey shows that cultivated land comprised 16 percent of national land use. Orchards and plantations account for another 3 percent. Forests and grasslands are the most prevalent land use, covering a combined 68 percent of land area. Urban/industrial/mining covers 4 percent of land, according to the survey results. The land survey results were released in a communique by China's Ministry of Natural Resources and National Bureau of Statistics after 3 years of work. This survey measured land area as of December 31, 2019. The previous land survey had gathered land data as of 2009.

The communique doesn't mention it, but China would be at the "red line" of 120 million hectares and below its 2030 target (121.7 million hectares) if cultivated land falls at the same pace during the next decade. 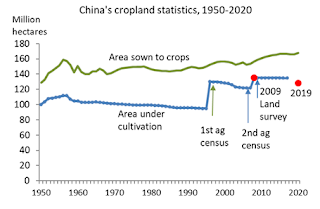 Ecological land uses are a new emphasis in this land survey. The 23.5 million hectares of wetlands had not been included in the previous land survey. The 30-million-hectare increase in forest land between 2009 and 2019 is consistent with new emphasis on ecological uses, but there was no explanation of the 22.8-million-hectare decrease in grassland.

According to the communique, the survey will be the basis for land planning. Local officials will be responsible for protecting cropland and preventing unauthorized conversions to nonagricultural uses. Requisition of cropland for urban uses must be "balanced" with new cropland created elsewhere. Cultivated land may be used to grow grains, cotton, oilseeds, sugar, vegetables, and other agricultural products. Some cropland is designated as "permanent basic farmland" which can only be used for grain production.