In land-scarce China, swine farming companies are making a great leap to factory farming by spending billions on high-rise, high-tech hog barns up to seven stories high. With generous subsidies, Chinese officials view these farm factories as a improvement on the traditional "backyard" livestock farming model--long viewed as a road to riches for generations of rural households. However, this corporate farming model is highly experimental, still unproven, and investors probably did not count on the cratering of hog prices this year.

These farms have varying designs, but they typically feature 5-7 story buildings that move pigs from floor to floor by elevator at different stages of their life cycle. Ventilation, temperature control, feeding, monitoring of pigs is often controlled by automated sensors, thermometers, and cameras. Animal waste is transported through tubes to centralized treatment facilities.

A recent article by Agriculture Industry Observer estimates nearly 200 projects to construct multi-story pig barns are in the works or already in operation. The article notes that no country has ever pursued the high-rise hog farm model to this extent and describes the current wave of investment as "exploratory."

High-rise pig facilities reduce the land footprint of farms by putting more pigs in the sky instead of spreading them across the land. In December 2019 China's agriculture and natural resource ministries jointly published a circular endorsing use of "infrastructure facilities" in agriculture to reduce land use. About the same time local governments began to aggressively subsidize construction of farms and arranged bank loans for them in a menu of 19 policies to restore hog production after the industry was decimated by African swine fever in 2018-19. 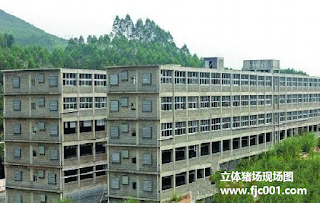 The facilities include extensive automation to address problems with biosecurity and scarce labor. They are expected to treat manure and are often paired with fruit orchards or vegetable patches where manure can be used as fertilizer in a "circular" model.

The article comments that high capital requirements of high-rise farms exclude small and medium enterprises.
With hog prices having fallen 50-60 percent in 2021, the focus is now on cost-cutting. These projects mostly focus on farrowing segments of the operation and they were able to recover investment costs quickly when piglet prices were high, but even piglet prices have dropped now. In theory, operating costs will be lower than conventional farms, but it's unclear whether savings on land leases are outweighed by construction costs and whether economies of scale and automation will achieve anticipated efficiencies and cost-savings.
An article by a supplier of feed additives warns that high-rise pig farms face risks of waste contaminating water pipes, disease transmission due to excessive concentration of animals, and potential for excessive use of chemical disinfectants to make manure untreatable. The article warns readers to ensure columns and foundations are sufficiently load-bearing to ensure long life since it will take years to pay off initial investments. The author helpfully recommends some of his company's products to address the problems, gives recommendations about manure scraping, and warns readers that design should consider seasonal sunlight, moisture and temperature, farms should not buy feed or pigs from areas that have disease, farms should be surrounded by trees or ditches to guard against disease, and all-in-all-out management is necessary.
The Feed Industry Information Net said many pig farmers are thinking about quitting due to twin pressures of low hog prices and environmental enforcement. Twelve companies reported lower net profits in the first half of 2021 and five posted losses. Muyuan also encountered difficulties with sales in August. The Feed Industry article warns that the hog industry is in a "deep winter" and warns that strict environmental enforcement could strike a heavy blow to the industry. Some localities have launched environmental remediation following complainants of persistent "chaotic" manure-handling and emissions by hog farms. A breeding farm in one Guangdong Province county had its electricity and water cut off and equipment was dismantled until all the pigs were cleaned up and disinfected.
Posted by dimsums at 9:24 PM

Its not just farming issues that are getting interesting