A March 15 exposé on Chinese consumer issues by China's Central TV highlighted the illegal use of banned feed additives in producing sheep. So-called "lean meat powders" (瘦肉精) that promote weight gain in animals were targeted by a CCTV journalist. These medications were originally developed to treat asthma and other breathing issues, but they also act like a steroid by promoting growth of muscle in animals. China has banned all beta agonists since 2002 because one of them--clenbuterol--can cause heart palpitations if ingested in high concentrations. 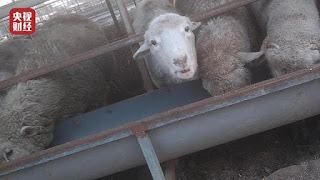 The reporter said he discovered dealers selling mutton from trucks parked at night just outside a food market in Zhengzhou, capital of China's Henan Province. A dealer who sells 200-300 carcasses per night said the meat could not be sold inside the market because the sheep had been fed a medication that would cause it to fail inspections. The dealer would not elaborate, but he did reveal that the meat came from Qing County in Hebei Province where 700,000 sheep are raised annually.

The reporter visited Xinxing Town in Qing County where he met a farmer who raises 1000 sheep. The farmer told him there was a code of silence to not speak to strangers about their use of "stuff" in feeding sheep.

A sheep trader told the reporter he likes to buy sheep from Qing county because their carcasses have a high proportion of meat and bring good profits. The trader also declined to elaborate: "You know we're not allowed to talk about it, brother."

The reporter said he observed a farmer adding corn meal and peanut vines to his sheep's feeding trough. The farmer then grabbed a blue bag and mixed some white powder with the fodder. The powder was nearly invisible after mixing.

The reporter said he grabbed a sample of the powder which he later submitted for tests that showed it was a banned "lean meat powder."

Farmers say village party secretaries warn them in advance about officials who plan to inspect farms. When they hear about an inspection they lock the door, run away and hide. The farmers have a reserve of "green" sheep that are not fed beta agonists so they can be mixed in with other sheep in truckloads going to markets or slaughterhouses to serve as designated test subjects.

As usual, the article made no distinction between three beta agonists: clenbuterol, ractopamine, and salbutamol. Ractopamine was designed to flush out of animal tissue before slaughter and is approved for legal use in 30 countries when used according to instructions; Japan and a number of other countries approve imports of meat containing ractopamine. China has a zero tolerance for traces of any beta agonist in meat, and Chinese news media continue to conflate ractopamine with clenbuterol, fueling uninformed hysteria.

Some may recall that the same program revealed Shuanghui company's purchase of pigs fed with clenbuterol exactly 10 years ago.

The effects of high doses of clenbuterol (usually obtained by eating organs such as lungs and kidneys) on consumers sound not too different from the effects of monosodium glutamate which is used in nearly every restaurant in China. It's not clear whether anyone has ever gotten sick from eating animals fed with ractopamine.

After the appearance of the "lean meat powder" article, China's agriculture ministry immediately ordered local officials to conduct a 3-month crackdown on use of "lean meat powder" by conducting surprise inspections and forming teams with police and market supervision authorities to give the crackdown more bite. Officials were ordered to dig deep into the "black supply chain," remove "protective umbrellas," and prosecute violators. Qing County launched a "sharp sword" campaign to remediate the problems pointed out in the exposé.

As part of the Phase One agreement, China pledged to conduct a risk analysis of ractopamine that would facilitate an evaluation of whether its blanket ban on the substance is science-based. China has not yet completed the review.

Suspicious minds might suspect that this article was planted to generate hysteria over "lean meat powders" so that officials can point to consumer resistance to justify continuing their blanket ban on ractopamine. Or perhaps officials are maneuvering to restrict meat imports once the domestic swine industry has sufficiently recovered from African swine fever...

Your posts are always interesting...