China's swine inventory was about 14 percent below its pre-African swine fever epidemic level at the end of Q3 2020--about half last year's deficit. With peak pork consumption season coming up in Q4, it will be hard to continue rebuilding swine inventories in the last three months of 2020.
China's National Bureau of Statistics released macroeconomic data for the third quarter of 2020 that included a swine inventory of 370 million for the quarter's end, 14 percent less than the pre-ASF inventory of 429 million head in Q3 2018. China's swine inventory bottomed out at 307 million in Q3 2019, about 28 percent less than the pre-ASF level. According to the Bureau, the inventory at the end of Q3 was up 9 percent from Q2.
The Ministry of Agriculture reported that the swine herd had been growing steadily at 4 percent since June, faster than the 3 percent monthly growth implied by the Statistics Bureau's numbers. In August, the Ag Ministry reported that the swine inventory was up 31 percent from a year earlier, but the Statistics Bureau's Q3 inventory is 21 percent higher than a year earlier.
The Statistics Bureau said the number of sows at the end of Q3 2020 was 38.2 million. The Q3 sow inventory is 4.7 million below the pre-ASF sow inventory of 42.9 million posted at the end of 2017 (the target of "normal production capacity"). Previous numbers indicate China added 2.5 million sows in Q2 and 2 million in Q3. It is unclear how the Bureau can count sows with any degree of accuracy. In August, the agriculture ministry said that 11,123 new "above scale" farms were built this year and 11,800 farms that were emptied last year have been restocked. How can they get an accurate count with so many new farms and millions of backyard farms having exited?
The August Ag Ministry report said 26 million piglets were born in August, up 59.5 percent from their low point in January. Yet the price of piglets also peaked in September, up 44 percent from the beginning of the year and double the previous record in June 2016.
National Bureau of Statistics numbers indicate that 110.8 million hogs were slaughtered and pork output was 8.4 mmt in Q3 2020. Pork output in Q3 was lower than in Q2. Pork output in Q3 2020 was up 18 percent from a year earlier but it was 31 percent below "normal" output in Q3 2018. 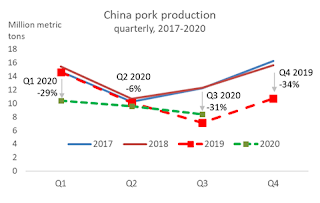 The Statistics Bureau reported that cumulative pork output for the first three quarters of 2020 totaled 28.4 mmt, down 3.4 mmt from Q1-Q3 2019, and down 10 mmt from Q1-Q3 2018. According to the Ag Ministry, 2.9 mmt of pork was imported January-August, which appears to fill about a third of the supply shortfall. Pork production will have to rise substantially during Q4 2020 just to meet peak seasonal consumption demand in that quarter.
The Statistics Bureau said overall meat production for Q1-Q3 2020 was down 4.7 percent from a year earlier. Poultry meat output was up 6.5 percent, but beef output was down 1.7 percent and mutton output was down 1.8 percent. Egg output was up 5.1 percent and milk output was up 8.1 percent.
The Statistics Bureau's CPI report said that a 14-percent increase in the food component accounted for nearly all of the increase in the consumer price index for the first three quarters of 2020. The increase in food prices, in turn, was led by an 82-percent increase in consumer pork prices. In the first two months of 2020 pork prices were 135 percent above year-earlier levels, the Bureau reported. Rising pork prices pulled along increases in consumer prices of beef (17.9 percent), mutton (10.3 percent), chicken (5.8 percent), and duck (4.5 percent), according to the Bureau's report. Egg prices fell 8.7 percent.
Posted by dimsums at 8:56 PM

Thank you. Very interesting article that shows that Chinese pork sector is still struggling.
I have one question: how do you explain the decrease in pork production quarter after quarter? Because at the same time the swine inventory is increasing. Is it logical?