In one breath, Chinese agricultural officials in Beijing proclaim a robust recovery of the pork sector, and with the next breath they issue urgent orders to their underlings in the provinces to build more pig farms.
China's agriculture ministry held an October 10, 2020 videoconference where provincial and local officials were admonished not to slack off on implementing hog production support measures as the industry's recovery enters a "key period." Beijing officials explicitly ordered both provincial and local leaders to take seriously their responsibility to expand pork supplies, an indication that engineering a rebound in pork output remains a top "political task" after a year of shrunken pork supplies and record-high prices.
On October 15, the agriculture ministry's press conference on agricultural markets pronounced that hog production capacity had staged a steady recovery during the third quarter of 2020. Officials praised the smooth operation of the market during the mid-Autumn festival and National Day holidays. Officials predicted a Q4 payoff in expanded pork supply after 11 months of increases in sow inventories with stable and declining pork prices.
National Bureau of Statistics data show that China's average hog price started falling in August 2020. The early October price happened to be about the same as a year earlier, but a year ago prices were climbing rapidly toward a record peak late in October 2019. During October 2020 the hog price is still more than double the level in 2017 and 2018. Last week's agriculture ministry press conference said it is very unlikely pork prices will reach the peak that prevailed in late October last year. 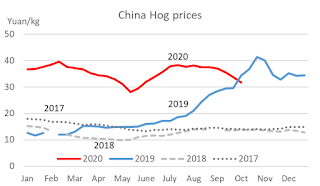 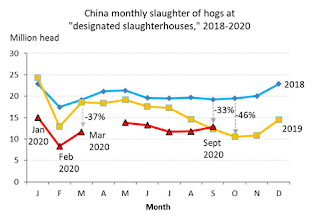 Officials speaking at the October videoconference urged provincial and local leaders to implement programs to subsidize and facilitate construction of new farms; payout aid funds to farms asap; set aside land for new pig farms; badger banks to accept pigs, barns and manure tanks as collateral for loans; and ease up on environmental impact assessments of new farms. Officials were instructed to "guide" medium and small-scale farms to restore and expand their swine herds. With officials being urged to build new farms, it would seem the recovery still has a ways to go.
Posted by dimsums at 2:02 PM