Chinese officials admitted that thousands of people were infected with brucellosis last year after bacteria escaped from a vaccine factory in the Gansu Province's Lanzhou City, but the official story still has some loose ends that raise questions.
News media such as CNN are reporting the story spun by official Chinese news media: that the Lanzhou Health Commission confirmed 3,245 people contracted brucellosis and an additional 1,401 have tested positive. The infections were attributed to bacteria that drifted from a vaccine factory's exhaust to a nearby veterinary research institute. The factory was blamed for using disinfectant that was past its use-by date. Some infections occurred more than a year ago--in July-August 2019--but the crisis peaked and was first publicized in December 2019.
Brucellosis is a bacterial disease that primarily affects livestock. It is not known to be transmissible from human to human. Brucellosis can have debilitating effects on humans if not treated immediately, and is sometimes called "lazy man's disease."
It seems an odd coincidence that the brucellosis bacteria happened to drift into a Chinese Academy of Sciences veterinary institute where research on livestock diseases like brucellosis are one of the chief activities. The official explanation is that the veterinary institute is 500 meters downwind of the factory. Does the wind always blow in one direction? 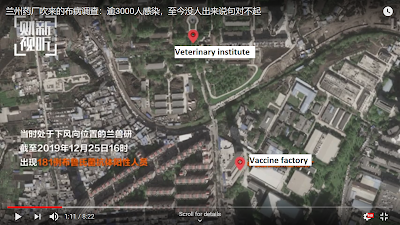 According to a Caixin news report published by Nikkei Asian Review, ten residential communities with 10,000 people are with 1 km of the vaccine factory. Caixin said positive test results were found for 2,500 people residing near the factory, 213 at the veterinary institute, just 8 at the factory, and 150 who lived further from the factory. Caixin interviewed a husband, wife and son at the institute who were all infected. A member of the cleaning staff said 6 of her 23 co-workers tested positive and others who became ill were not tested. A YouTube video interviewed infected people and displayed many papers showing positive test results.
Reporting on the brucellosis infections last December focused on the lab that conducts animal disease research. A story previously reported by Nature and Chinese news media in December 2019 said that 96 staff and students at the veterinary institute were infected with brucellosis. A second cluster of infections reported that same month at a veterinary lab 2600 km away in Harbin was linked to the Lanzhou lab.
According to the Baidu description of the incident, four students working in the foot and mouth disease lab in the Lanzhou institute tested positive for brucellosis November 28-29, 2019. Nature reported a Beijing News article that said the brucellosis infection was discovered after large numbers of lab mice became infertile. Caixin also reported that concern was prompted by infections of mice and lab workers. How did mice in cages inside a laboratory get infected by bacteria floating in the air outdoors?
The December 2019 Beijing News article reported that testing to investigate the source of the brucellosis infections was focused on the laboratory, lab animals and the facility where the lab animals were housed. Beijing News faulted students for failing to wear masks and take other precautions. There was no mention of the vaccine factory.
Also in December 2019, Heilongjiang's health commission reported that 13 students at the Harbin veterinary research institute tested positive for brucellosis. Two students told Chinese news media outlet The Paper they had worked as interns at the Lanzhou lab during their summer vacation. Again, the infections were linked to the laboratory.
According to the U.S. CDC, brucellosis is most often transmitted to humans by consuming unpasteurized milk from infected cattle, sheep or goats. CDC says breathing in the bacteria is also a possible source of infection, and this risk is generally greater for people who work in laboratories. Nature said neither of the institutes in Lanzhou and Harbin responded to requests for comments on the infections and their safety procedures.
In reporting the story last week, China's Global Times also noted that provincial and municipal health officials had declined to comment on the brucellosis incident. According to Caixin, "Patients said doctors seemed inexplicably reluctant to issue brucellosis diagnoses or to quickly order aggressive treatments." Lanzhou officials claimed the infections were from diluted bacteria counts that would have little impact on infected victims, but a local doctor interviewed by Caixin said his hospital received over 100 patients with "relatively severe" symptoms last December. Caixin said half of 40 people living near the Lanzhou vaccine factory they interviewed were suffering symptoms from brucellosis a year after the first infections. Only two had been officially diagnosed with brucellosis.
Chinese officials have displayed a clear pattern of covering up disease outbreaks. Why did Chinese officials cover up this incident? Perhaps a story about careless procedures by personnel working with dangerous pathogens would have reinforced the hypothesis that covid-19 was accidentally released from the lab in Wuhan by similarly careless procedures?
Posted by dimsums at 9:08 PM

Thanks for writing this blog .We also help with a cost analysis of new product development consultants and food consultancy for your specification and certification process of your product.