China's Ag Imports Up 13% Despite Pandemic, as of July

The Agricultural Trade Promotion Center of China's Ministry of Agriculture and Rural Affairs reported that China's agricultural imports for January-July 2020 totaled $96.2 billion, up 13 percent from the same period a year earlier. The increase came despite an economic slowdown and logistics disruptions during this year's covid-19 pandemic. China's agricultural exports totaled $41.9 billion, down 3.3 percent from a year earlier. The Center did not report trade numbers for individual trading partners. 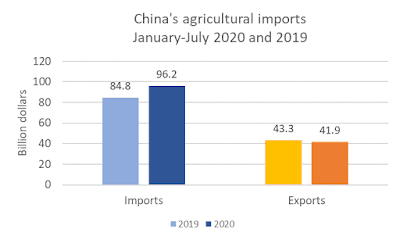 Livestock products were the largest component of agricultural imports reported by the Center. The $28.3-billion livestock total exceeded the $23.8-billion value of oilseed imports for the first time.
The 42.2-percent increase in livestock import value was stimulated by the country's huge meat supply deficit after last year's African swine fever epidemic decimated China's swine herd. China has a net trade surplus for vegetables and aquatic products, but imports exceeded imports for all other major categories of agricultural products. Imports of cereal grains are also up 45 percent so far in 2020, but their $4.2-billion value was much lower than that of livestock and oilseed imports. 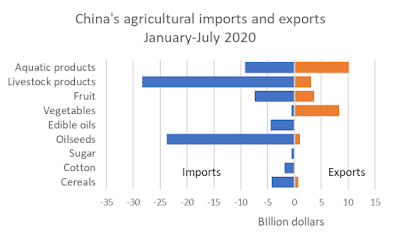 
Fantastic analysis as always, thank you again for your efforts. I am scratching my head at the reports of China's very large purchases of corn (US, Ukraine) and how that sits with the TRQ. Do you think the govt will provide special permits for imports beyond the 7.2m or is it that imports are competitive even with the 65% out-of-quota tariff?