China's swine industry is rebuilding after losing a large chunk of its herd to an African swine fever (ASF) during 2018-19, according to a Chinese Agriculture Ministry official's report last week. However, supplies are tight and prices are record-high as many villagers cannot market their hogs and only a few slaughterhouses are in operation.

The communist party's "Number one document" made swine industry recovery a major rural policy task for 2020 by issuing a directive to "accelerate recovery of hog production, ensure hog production capacity is basically restored to the previous normal level by the end of 2020." In last week's briefing on the topic, Yang Zhenhai, director of the livestock industry and veterinary bureau, reported that market incentives and policy aid have stimulated a steady recovery, and the industry is making progress in meeting the document's objective.

Yang said the inventory of productive sows in 400 counties rose 1.2 percent in January 2020, the fourth monthly increase in a row. Yang said sow numbers have increased 8 percent since October. You'll have to take his word for it, because the Ministry has not issued any monthly reports on sow and hog inventories since October 2019, the first gap in these reports since they were first issued in 2009.

In September-October 2019, the Ministry's reports said sow numbers had shrunk about 40 percent from the same period in 2018. Yang did not provide a year-on-year comparison of sow numbers for January 2020, but he said 7 provinces now have more sows than a year ago. Four of those were provinces in the northeast (Liaoning, Heilongjiang, Jilin, Inner Mongolia) where the African swine fever virus made its first appearance in China and decimated herds in the fall of 2018. The other 3 were minor pork-producing provinces Shaanxi, Gansu and Ningxia. Yang said sow numbers had increased for 8 months in Liaoning (where the first cases were reported 17 months ago), 6 months in Hebei, Shanxi and Heilongjiang, and 5 months in Henan.

Yang emphasized that the sow inventory held by "above scale" farms slaughtering 500 head or more increased 2.2 percent in January. These farms have seen five months of increasing sow numbers, and their growth exceeds the national average. He said 500-head and larger farms account for half of slaughtered hogs and are the main force in the recovery of pork supply.

Mr. Yang acknowledged that land and credit are still problems blocking pig farm expansion in some localities. He noted that pork supplies have been constrained by coronavirus quarantines and lockdowns that have disrupted transportation of feed and breeding pigs and prevented farms from supplying hogs to slaughterhouses. 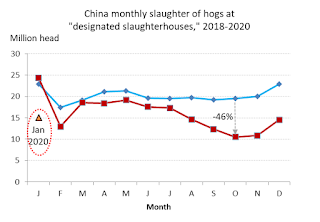 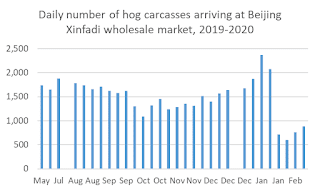 The number of carcasses arriving at the Xinfadi wholesale market in Beijing increased to over 2000 per day during the weeks leading up to the holiday, but the number plunged to under 1000 per day over the past week, an unusually low number.

Xinfadi's latest report says pork supplies are tight and prices are high because many slaughterhouses are still not operating due to lack of workers. Some employees have not returned from the holiday and those that have returned are under quarantine. The Beijing market gets most of its hog carcasses from northeastern provinces where only 11 slaughterhouses are operating. Only 7 facilities are operating in Liaoning, and just 2 each in Heilongjiang and Inner Mongolia. These facilities supply the northeastern market, Beijing, and some cities in central and eastern China, Xinfadi said.

According to Xinfadi, only large-scale farms are able to deliver finished hogs. Family farms cannot market hogs because trucks cannot enter villages still under lockdown to prevent spread of the coronavirus. Purchase of hogs has been further constrained by snowfall across much of northern China last week. Xinfadi says demand for pork has also been curbed by high prices. Its early February report noted that restaurants were closed due to virus fears, further reducing demand.

With tight supplies, prices of pork, hogs, and feeder pigs continued to rise in February, according to wholesale prices reported by the agriculture ministry. The increases were counter to the usual pattern of declining prices after the Chinese new year holiday.