China's rural employment dropped by 9.43 million and urban employment grew by 8.28 million in 2019 as the country continued its transformation from rural to urban according to data reported by the National Bureau of Statistics last week. The number of Chinese people employed in the countryside has fallen 158 million over twenty years, according to data reported by the Bureau. The proportion of workers in the countryside fell from 70 percent in 1999 to 43 percent in 2019. The report noted that overall employment has been declining the last two years along with shrinkage of the working-age population ages 16-64 years old.

China's unemployment rate fluctuated between 5.0 and 5.3 percent during 2019, the Bureau said. Unemployment was lowest in Q2 2019, peaked at 5.3% in February and July, fell to 5.1% in October-November and edged up to 5.2 percent in December 2019. The report said job opportunities are plentiful. 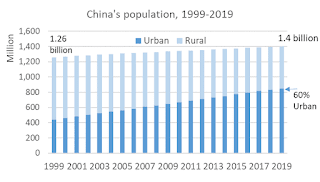 Employment concerns were reflected in paragraph 18 of the "Number one document" issued last week which called for "stabilizing rural migrant employment." The document recommended subsidizing companies to keep workers on their payrolls; creating rural construction and other jobs through government investment; boosting rural service jobs in food service, nursing homes, hospitals, and e-commerce; and creating public-sector jobs in villages for plumbers, street cleaners, and guards for roads and forests. The document called for clearing up unpaid wages for migrants and recommended putting deadbeat employers on a black list. The paragraph on village conflict resolution exhorted officials to clear up disputes over unpaid migrant worker wages and to prevent disputes from being taken to higher levels of government. The document said laid-off rural migrants should be able to collect unemployment insurance benefits in their home village. The unemployment insurance burden on companies should be lightened to encourage them to take on more workers, the document said.