China will conduct its third agricultural census in January 2017. This may be the largest statistical activity ever and one of the most challenging. The first modern agricultural census was conducted in 1997 and resulted in major revisions of land and livestock statistics. A second census in 2007 received less fanfare. Officials insist it was accurate but there were allegations of shoddy work and village officials filling out questionnaires in their offices with made-up numbers.

The agricultural census is conducted by recruiting thousands of local officials, teachers, and other temporary enumerators who fan out across the countryside to administer six different questionnaires to farmers, companies, village and town officials. Statisticians hope to find out who lives in the countryside, what they do, how much land they have and what they plant on it, what machinery and animals they have on hand, and take an inventory of rural land use and infrastructure. The census will be conducted in early 2017 and will ask about the situation as of December 31, 2016. It will provide the first-ever comprehensive profile of "new-type" commercial farmers and land transfers. The census will provide a snapshot of a fast-changing countryside, and take an inventory of land and livestock that is critical to re-calibrating annual estimates of crop production, meat and dairy output. 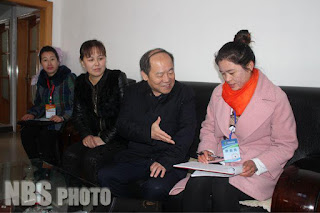 Last month a meeting to publicize the agricultural census was held in Jilin Province, where Director of the National Bureau of Statistics Ning Jizhe met with enumerators and rural families and stressed that this is a key period in which careful preparations must be made for the census which is only two months away. Reading between the lines in Ning's comments, we can deduce daunting problems that could undermine the census. Below are direct translations of comments made by Ning followed by an interpretation of what he really means, in italics.

"Agricultural census leadership groups and statistical organizations at each level must strengthen their sense of responsibility and urgency, making serious preparations for the work, strictly adhering to the national unified work deployment, unified time preparation, and unified procedures, ensuring that all types of preparation work is done in a timely manner." [what he means: "Look guys, this is an important job. We know agriculture and village roads are not your priority, but will you please take this seriously and not just go through the motions, treating it as just another pesky demand from Beijing? Follow the procedures we give you; don't just do it in a way that's convenient for you and don't make it up as you go along."]

"...completely implement the party’s 18th sixth plenum, rightly unified under Xi jinping’s core party central committee, sticking to a strict governance system, conducting the census according to law." [what he means: "No more 'the hills are high and the emperor is far away.' The Communist Party discipline inspectors are watching you!"]

"Implement the census in the spirit of the 18th Party Congress, motivating personnel and energizing the activity to produce solid work, truthful, reliable statistics, delivering satisfactory questionnaires to the Central Party Committee and State Council." [what he means: "This data is ultimately for your communist party leaders, not for the general public, not for businessmen, market analysts, or even for local officials like you. Nevertheless, we want you to actually do the work and tell us the truth, not just go through the motions or fake the data, because the party leaders need to know what's going on out there."]

"...Do a good job in legal enforcement inspection work, firmly resisting all kinds of intervention in census data." [what he means: "Don't let local officials massage or fake the numbers to show success of programs or to get subsidies. If your county got millions in subsidies for machinery, grain, or animals that don't exist, don't be tempted to inflate the numbers to pretend that they actually do exist."]

"conduct the census using a scientific program, strengthening quality control in the entire work process; expend effort to minimize errors, ensure that truthful, reliable data is collected." [what he means: "Collect the data the way we tell you to do it. If everyone uses their own methods, the data will be meaningless. Measure fields with a tape measure in meters and hectares; don't use a bamboo pole or pace it off to measure the field; don't measure fields on hillsides or river bottoms differently from fields in valleys. Make sure everyone actually turns in their village's forms. Check your work and correct errors when you find them."]

"...make every effort to raise the quality of the census by engaging in on-the-ground data collection." [what he means: "Don't just sit in your office and fill out the forms. Go out to the village and actually interview people, measure fields, make sure things and animals reported on questionnaires actually exist. We know it's time-consuming and troublesome, but we'd like to know what's really going on out there, not just what you think we want to hear."

"Fully ensure expenses can be paid for each kind of census work, especially taking into account local actualities, adopting effective measures, ensuring work subsidies for census personnel and leaders; strictly regulating use of census funds with careful planning and thrift." [what he means: "Do not steal the money we send you to conduct the census. Remember to buy batteries for the electronic gizmos you're using to enter the data. Pay the enumerators; don't use the money for banquets, cars, or trips to Macao.  In some places, the enumerators will work for a few dollars, but in other places they have higher expectations. If you pay people in Shanghai 20 kuai per day to administer census questionnaires, they will probably just sit at home and fill them out at random."]

"Provincial and municipal agricultural census offices must pay close attention and give strong direction." [what he means: "We know you have better things to do in provincial capitals and city offices than count farms. We know you avoid the countryside unless you're sightseeing or visiting granny. But we need you to keep an eye on the county and township officials who are actually collecting the data. They can get up to all kinds of mischief.]

"County and township offices must take responsibility for selecting quality personnel...having capable census enumerators, leaders, strengthening training appropriate to the needs of the census work." [what he means: "Local officials, don't just hire your relatives or illiterate old people to administer questionnaires. Try to find people with some education, like teachers or nurses, who can count and won't blow off the work to focus on their stock-trading or real estate investments. Give them proper training so they know how to fill out the forms and turn on the PDAs."]

"Improve census on-site efficiency. In the countryside today many people, including migrant workers, the elderly and children have a hard time completing the survey. Give preparatory training before officially taking the survey through QQ, microblogs, email and other methods. Let migrant workers fully understand the census period, the contents and requirements, to bear the tasks and responsibilities, related work and support for the broader targets of the census." [what he means: "It's hard to do any kind of survey in the countryside these days because no one is home except old people and kids. A lot of these people don't know how to fill out the questionnaire, so give them some advance warning and instructions. Let people know when the census will be conducted so they can try to be at home. People working away from their village need some encouragement to talk to the enumerators and answer the questions."]

Let's all wish comrade Ning the best and hope we get some accurate statistics on China's rapidly-changing countryside.
Posted by dimsums at 7:16 PM