China produces about half of the world's pigs, but its farmers are still figuring out the business of commercial hog production. The average daily weight gain of hogs has risen dramatically from about 0.4 kg/day in the early 1990s to nearly 0.7 kg/day for "scale" farms (30 or more head), but improvement seems to have plateaued in the last few years. 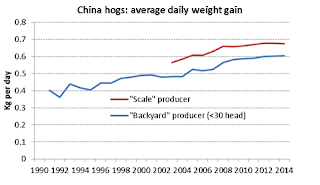 A recent article in China Livestock and Veterinary News asserts that Chinese farmers are taking on bigger and bigger risks as the scale of hog farms grows larger. The author points out that farmers experience big losses from lackadaisical management and cutting corners in ways that result in spread of disease and poor performance. He hopes that calling attention to these "loopholes" will bring them "from tears to riches."

The author points out that modern livestock production is a high-tech industry, but few people involved in China's hog industry are highly educated. In particular, the author points out that few Chinese farmers use professional veterinarians for treatment or advice. When disease spreads, farmers "blindly" use veterinary drugs to treat animals. The author urges farmers to use high-quality personnel and to pay good wages to motivate them.

Chinese farmers rely too heavily on antibiotics, says the Livestock and Veterinary News author. They routinely use multiple drugs to treat diseases, prevent diseases, and to promote weight gain. Many farmers continue administering drugs right up to the time of slaughter, worrying that animals might get sick if the drugs are stopped. Farmers aren't aware that drugs should not be administered during the days prior to slaughter in order to eliminate residues from the animal's body before it is butchered and consumed by humans.

The article criticizes Chinese farmers for erroneously thinking that more drugs are always better, and for judging the quality of drugs by their price. Farmers aren't aware that different antibiotics are needed to treat different diseases. It is common for farmers to administer a drug for a few days and stop, or to switch from one drug to another before the results can be properly evaluated.

Dosages are often incorrect. Some farmers administer too much, thinking that higher dosages will always be more effective. A common rule-of-thumb is to double the dosage recommended by the manufacturer. In other instances the dosage is too low when the drug is mixed with drinking water or feed and farmers don't take into account the animals' loss of appetite when they are ill.

Another popular strategy among Chinese farmers is to buy the ingredients and mix drugs themselves on the presumption that better results come from using pure ingredients. Farmers are often unaware of proper formulations, either lacking instructions or ignoring them. Some factories provide instructions only in English to give the impression that they are sophisticated and high-quality, but none of the farmers can read them.

Some farmers use probiotics and antibiotics together, which kills off beneficial bacteria. Antibiotics can also kill live viruses in vaccines.

China relies on free government distribution of vaccines to control diseases, but there are a number of loopholes here pointed out by Livestock and Veterinary News. The author says that vaccine inventories are often overstocked because statistics used to distribute the vaccines are inaccurate. Thus, many vaccines are kept past their expiration date. Vaccines are not always kept at proper temperature because electricity supplies are unreliable or transportation equipment is not refrigerated. Tap water or water drawn from dirty rivers is often used to mix vaccines; distilled water, saline solution or other proper diluting agents should be used.

Many farmers don't understand the importance of disinfecting farm facilities, the author asserts. Many farmers just go through the motions of sanitizing their farms.

The author warns farmers not to move pigs into new facilities too quickly. Concrete must be fully hardened and disinfected twice before bringing pigs in. Otherwise, the floors could be too alkaline and give pigs problems with their feet. He also warns that floors that are too slippery could cause inflamed joints or laminitis.

The author points out that inappropriate feed rations are used for some animals. As with medications, farmers often ignore instructions recommended by feed manufacturers. Relatively little feed is formulated specifically for boars (since there aren't that many of them), so many farmers give their boars sow feed instead which does not give them the proper nutrients needed for good performance in what boars do. Many farms use the wrong feed for nursing sows which cuts down on lactation and delays the next breeding. Wet feed breeds mold that emits toxins and mosquitoes that spread disease during hot weather. Farms that feed animals by hand often refill troughs before they are empty, so the feed may stay in the trough too long and thus spoil.

The Livestock and Veterinary Medicine author's emphasis on disease and vaccine issues is borne out by analysis of cost of production data from the China National Development and Reform Commission. The data show that veterinary expenses by Chinese hog producers have been on the rise. Expenses were about 5-10 yuan per head before China's PRRS (known as "blue ear disease") epidemic in 2006-07. Expenses rose sharply during that period, and have now risen to 20 yuan per head for "scale" farms and 15 yuan for "backyard" farms. "Scale" farms consistently spend more on veterinary expenses than do "backyard" producers. Presumably, these expenses exclude the cost of free vaccinations for classical swine fever, foot and mouth disease, and PRRS provided by the Chinese Ministry of Agriculture. 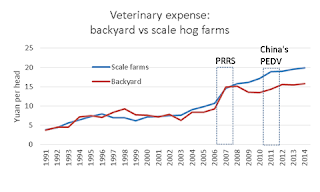 Mortality losses for Chinese hog producers are also up. And "scale" producers appear to have higher losses than "backyard" producers, despite their higher veterinary expenses. The Chinese production cost estimates indicate that "scale" producers were hit especially hard by the PRRS outbreak during 2006-07 and by China's piglet diarrhea epidemic during 2011. Expenses from death loss are consistently higher for "scale" hog farms than for "backyard" farms, seemingly confirming the Livestock and Veterinary News author's concern that Chinese farmers are taking on greater risk as the scale of farms expands. 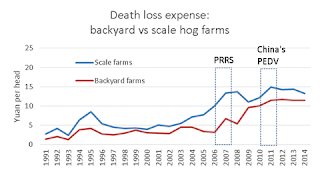 It is imperative that China address these issues. China produces more than half the world's hogs but it also produces the most expensive ones. Comparing farm prices of hogs in the U.S. and China shows that Chinese prices have soared above U.S. prices and the ratio was about 2:1 in August 2015. EU prices have been a little lower than U.S. prices, so it's likely that China has the most expensive hogs of any major producer. Improving productivity and reducing disease losses are among the measures needed to reduce those costs. 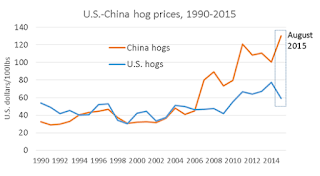