There are rumors that China's Ministry of Commerce is mulling an antidumping investigation to slow imports of U.S. Distillers Dried Grains with Solubles (DDGS).

On October 27, 2015, China's Farmers Daily published a collection of articles from a "corn industry alert" meeting held by the Ministry of Agriculture's Information Center on October 9 where industry representatives discussed how to deal with problems of soaring corn stockpiles, declining prices, weak demand and pressure from imported corn substitutes. Two of the articles called for limits on DDGS imports to help the domestic ethanol industry return to profitability. 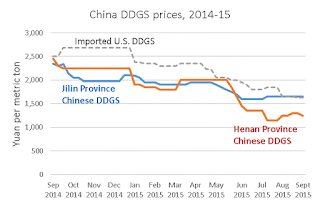 DDGS is the by-product of manufacturing ethanol from corn. China also has manufacturers of ethanol for fuel, beverage and industrial uses who rely on selling distillers grain by-products for a significant portion of their revenue. Domestic DDGS prices have tumbled by half or more over the past year. One price report today says DDGS produced in Jilin Province today is selling for just 1070-1120 yuan per metric ton. Imported DDGS is selling at 1470 yuan/mt at the Qingdao port and 1540 yuan/mt at Tianjin, nearly 1000 yuan less than a year ago.

Zhang Guohong, an author of one of the Farmers Daily articles and an official from China's alcohol industry association, complained that declining prices of imported DDGS have put pressure on Chinese distillers grains prices. Normally, Zhang said, the DDGS price is comparable to or higher than the price of corn, but now DDGS is 600 yuan (roughly 20%) less than the price of corn. This inflicts severe losses on the Chinese alcohol manufacturers, reducing the industry's demand for corn, in turn contributing to the build-up of corn inventories in China. Zhang demanded that the government somehow control imports of American DDGS by raising the tariff, setting an import quota, or strengthening inspection and testing for genetically modified strains of corn in the DDGS.

A second author writing in Farmers Daily, Feng Lichen--a corn industry analyst, estimated that giving tax breaks and subsidies to the fuel ethanol industry could use up 30 million metric tons of China's record-high corn stocks. He then noted that imports of substitutes for corn--sorghum, barley, wheat, DDGS, and cassava--displaced domestic corn, forcing the government to put 26 mmt of domestic corn into reserves. Feng urged the government to adopt stronger inspection and quarantine measures to control imports "without violating WTO principles." (Such a move would actually be a gross violation of WTO principles.)

The Chinafeedonline web site reported the rumor that alcohol distillers in China are requesting an antidumping investigation to protect their profitability. According to Chinafeedonline, industry officials became concerned when DDGS imports surged to 1.1 million metric tons during July 2015 after the row over an unapproved genetically modified corn strain was cleared up early in the year. Imports remained robust during the third quarter and Chinafeedonline estimates that imports are three times the domestic DDGS supply. According to Chinafeedonline, alcohol industry officials began considering a petition for antidumping relief in July and began preparing the documents in August. The Ministry of Commerce is believed to be considering the request for an antidumping investigation now, in late October. Chinafeedonline speculates that the investigation could be launched before the end of 2015.

This year's rumored antidumping investigation is another chapter in the story of China's fraying attempt to resist downward pressure on prices. Chinese officials have struggled to prevent prices from falling along with world prices, but leaks keep appearing. DDGS prices have fallen along with global corn prices. Chinese DDGS prices are below corn prices only because the Chinese government wouldn't let corn prices fall--in the northeastern provinces--but they are slowly losing their grip on corn prices as well.
Posted by dimsums at 8:39 PM