China Cracks Down on Agricultural Smuggling

According to news from Guangzhou, customs authorities there have broken up a beef smuggling ring that is suspected of illegally bringing 1351 loads of meat valued at 560 million yuan since 2014.

The gang allegedly bought frozen beef from the United States, Brazil, India, and Pakistan, and smuggled it into China by either evading customs, falsely reporting, or concealing the meat. The beef was cut up, packaged and then sold in Chongqing, Nanjing and Shanghai.The investigation involved 230 officers in Guangzhou, Shenzhen, and Foshan. They arrested 28 people as of April 7 and seized 24 metric tons of meat.

The beef case is part of the China customs "green wind" crackdown on agricultural products smuggling that began in 2014. Anti-smuggling efforts were also highlighted in the 2015 "Number one document" issued by the communist party central committee. Officials claim to have cracked 13,316 cases valued at nearly 45 billion yuan. The number of cases is reported to be up 32% from the year before. The largest number of cases involve rice smuggling.


In March, Guangxi customs officials reported breaking up a ring suspected of smuggling 5614 metric tons of corn from Vietnam since last year. The gang was led by a man named Lu who purchased corn from a business associate in Vietnam, hired drivers to pick up the corn and truck it over the border at an unguarded crossing. The corn was brought to a warehouse in Nanning and then shipped to other parts of China. 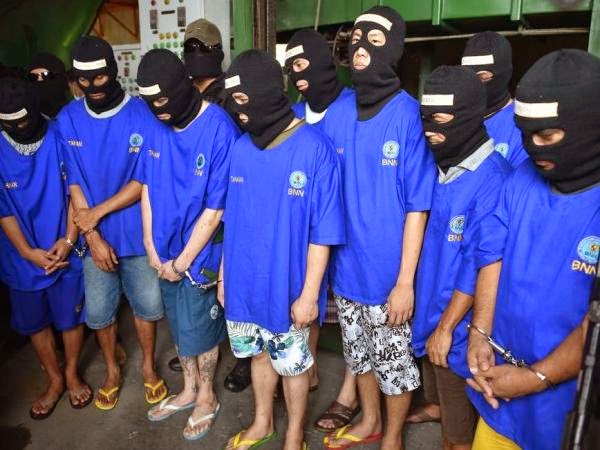 Last September, Kunming customs authorities arrested six suspects from two gangs suspected of smuggling a total of 85,000 tons of corn from Burma into China by driving trucks over the border late at night. 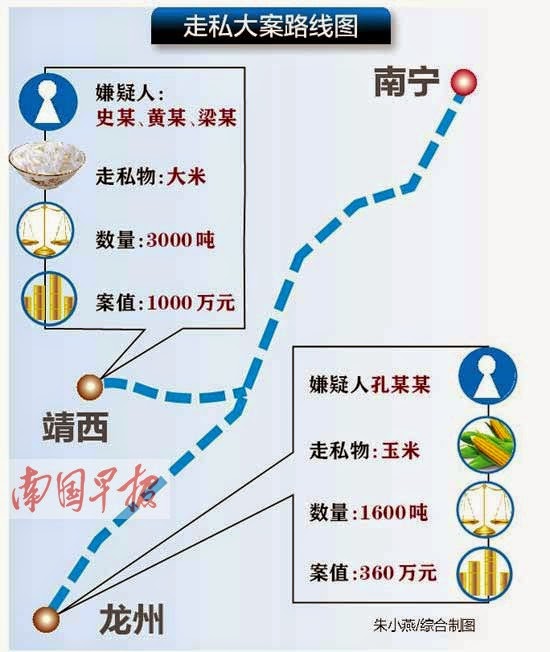 This diagram describes smuggling routes for rice and corn from two cities on the Vietnam border to Nanning, the Guangxi provincial capital. A gang led by people named Shi, Huang, and Cai are suspected of smuggling 3000 tons of rice. Mr. Kong is suspected of leading a gang that smuggled 1600 tons of corn.

Smuggling is rampant because Chinese prices are much higher than the price of imported commodities. Imports of many commodities are restricted by quotas or bans. In its February report on farm commodity markets, the Ministry of Agriculture included the chart below showing the domestic price of long grain rice (blue line) and imported rice (pink) since 2009. The price of imported rice has been 25-35% less than the Chinese price since the 2013 harvest.


The MOA data show that Chinese wheat, corn, and soybeans all exceeded import prices by 30% or more.
Posted by dimsums at 9:04 PM