China's leaders have ordered their minions to overhaul the country's agricultural sector. The orders began with the top communist party leadership at their "economic work conference." The directive was repeated in the party's "No. 1 document" for 2015, and now the Ministry of Agriculture has issued a document putting top priority on a structural upgrade of the agricultural sector. The restructuring is wide-ranging, ambitious...and doomed to fail.

The document suggests that officials are afraid to make hard choices in their planned overhaul of agriculture.
The main reason the restructuring will fail is that Chinese officials--who do not do any farming themselves--see themselves as the prime movers of this agricultural transformation. Chinese officials have already spent years subsidizing and cajoling farmers, lecturing rich men about their "social responsibility," and ordering banks to make loans. But in order for an agricultural transformation to occur, the people who control the land must be enticed to make long-term investments in it.

China aspires to make the leap to "modern agriculture." But modern farming is one of the more capital-intensive industries around, and that means a lot of investment per worker. Yet, in China's investment-crazy economy--where the gross capital formation ratio has risen from about 35% of GDP in 2000 to 48% of GDP during 2011-2013--agriculture attracts a puny amount of capital. 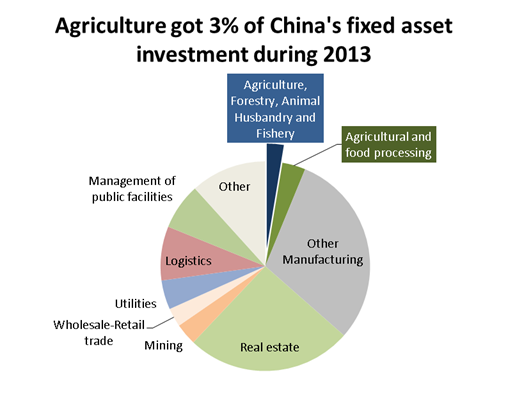 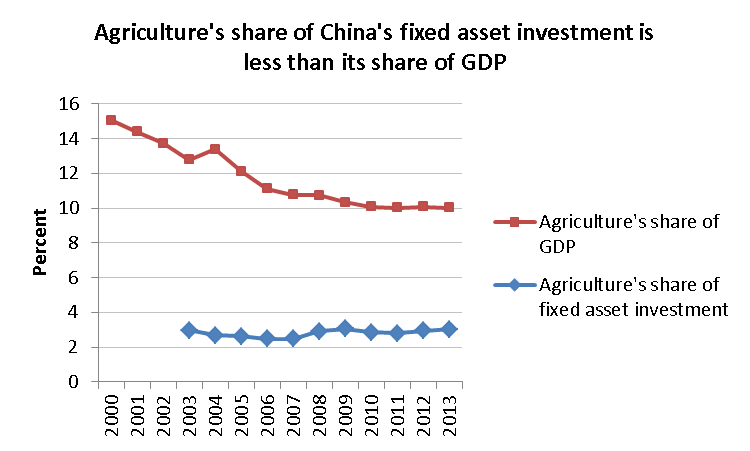 According to the National Bureau of Statistics, agriculture, forestry and fisheries accounted for 2-to-3 percent of fixed asset investment consistently from 2003 (when they began reporting these figures) until 2013. This was far below agriculture's share of Chinese GDP--which has fallen from about 15% in 2000 to 10% now. Agricultural and food processing--a smaller sector--gets more fixed asset investment than agriculture. 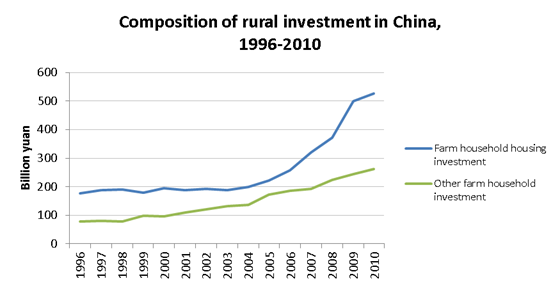 Nearly all the farmland in China is controlled by rural households who own it collectively, but they have little inclination to make long-term investments in it. Investment by rural households began to grow over the past decade, but investments were primarily in housing (the blue line in the chart above). It's well-known that rural families plough much of their savings into rebuilding their houses--the one physical asset they have full control over and an advertisement of their wealth. Other investment by rural households is in educating their kids, weddings and funerals, hospital expenses, and nonagricultural businesses. 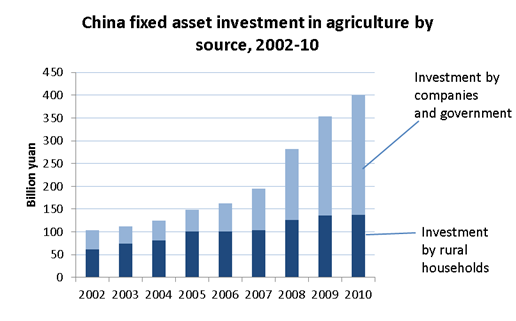 Source: China Rural Statistical Yearbooks.
With little investment by the rural households who "own" the land, Chinese agriculture relies on investment by companies that have a tenuous hold on land and government investment programs. The new plan to overhaul agriculture calls for improving financial services for agriculture, and reserve requirements have been lowered for agricultural lenders. The program also falls back on creating hundreds of demonstration areas, subsidized loans for building high-yielding fields and irrigation infrastructure. Notably, the plan also includes a directive to tighten supervision to prevent shoddy construction of "high-yield" fields, perhaps an indicator that some of these fields are not-so-high-yielding.

An article about the purported bankruptcy of a large-scale farmer in Chongqing suggests that the refurbishing of Chinese farms is not as easy as it appears. The article describes a farmer who rented over 10,000 mu of land (1,650 acres) from over 2600 families in 46 village groups to grow high-end rice. He had to raise wages to attract laborers, but could only hire old people. He bought machines but had to rely on hired laborers to cultivate 60 percent of the 8500 scattered plots on hilly land. Costs per mu of manually-planted and harvested land were three-fold higher than mechanized land. Much of the irrigation infrastructure was dilapidated, dating from the 1960s and '70s. He says he invested in upgrades, but only addressed 30% of needed improvements. His field advisors were mostly old men who had little technical knowledge. The Chongqing farmer claims he lost 2 million yuan, accumulated debts to pay laborers and buy pesticide, before finally abandoning the venture. The reporter claimed to have seen fields planted with trees, covered by fish ponds, or left fallow. The farmer claimed he was owed 300,000 yuan in government subsidies when he went bankrupt.

The article claims that many large-scale farming ventures are running into similar problems. It concludes that risk is often underestimated and farmers need more subsidies, better information and other services, and more bank loans. The Chongqing agriculture commission claims that its survey found that agricultural cooperatives only got loans equal to 2% of what they needed. In addition to interest, agricultural borrowers have to pay service changes for loan guarantees and fees to evaluate collateral, raising the effective cost of loans. A farmer in Shaanxi Province told the reporter that he went to a banker who laughed and said, "Why would I lend you money for farming?"
Posted by dimsums at 10:07 PM