Consuming dog meat is a deeply embedded part of food culture in certain regions and ethnic groups of China. However, the growing number of dog lovers has generated fierce opposition to the practice of killing dogs and eating them. Dog meat trade is legal, but regulating the production and marketing of dogs for human consumption presents a challenge for authorities.

[warning: images in this article will be disturbing to animal lovers]

The focal point of attention is a dog meat festival held each June in the city of Yulin, Guangxi Province. During 2014, the festival prompted protests and an appeal from an animal protection group to ban the festival. With so much public opposition, the Yulin municipal government issued a statement stating that the festival is put on by private operators, and Yulin authorities disavowed any role in organizing the festival. Another dog meat festival in Zhejiang Province has been canceled due to public opposition to the killing of dogs on street corners. 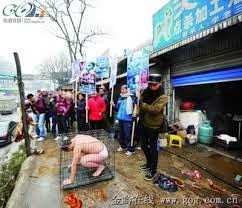 A man inside a dog cage protests eating of dog meat
outside a slaughter point in Guiyang.

Consumers of dog meat respond that it's no one else's business what they eat and the government has no right to interfere. A weibo post argued that the customs of ethnic groups that consume dog meat should be respected. A 2010 article noted that legal experts were formulating a proposal for an animal protection law that would assess large fines to enforce a ban on eating dog and cat meat, but noted that such a law would affect the "dog meat economy" in certain parts of Jiangxi Province. 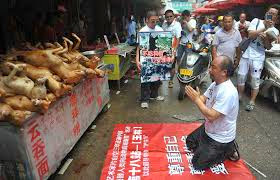 A more practical and immediate concern is the regulation and supervision of the production and distribution of dog meat to ensure sanitation and safety. During the 2014 Yulin dog meat festival there were accusations that dogs were kidnapped from owners to be butchered, that rabies is spread by sick dogs, and that the supply chain is mostly unregulated. 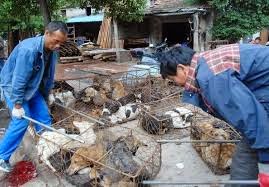 Regulating meat supplies poses a challenge on several fronts. The supply chain involves activities that are regulated by a variety of different authorities. Agricultural authorities are responsible for production of animals and feeds. Slaughter is an industrial process under technical supervision bureaus, marketing is under industrial-commercial bureaus, and restaurants are supervised by health departments. None of these officials have authority to make arrests, so police are often involved. A second problem is that production occurs in rural areas far from the cities where the meat is consumed.

News media investigations indicate that there is a dog meat supply chain much like those for other types of meat industries. Many of the dogs are raised on a small scale by farmers. Dealers come to villages to buy dogs, load them on to trucks, and transport them to wholesale markets or restaurants in various cities like Yulin. Sometimes they are butchered in slaughterhouses but many are killed by vendors at the point of sale.

There are no national standards for dog meat since this is a relatively small niche industry, but in 2013 the Ministry of Agriculture introduced a rule governing marketing of dog and cat meat. The rule requires that each dog be accompanied by three certificates--a health inspection, vaccination, and a lab test report. Producers are supposed to keep health and vaccination records for each animal. Dogs are supposed to be slaughtered in a facility designated by the government. The facility should file a report with authorities on the animals 6 hours before slaughter and again at the time of slaughter. 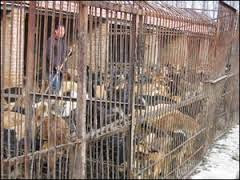 According to one estimate, the cost of transporting and acquiring all the required certificates would be 200-300 yuan per animal. The farm-level purchase price is about 9 yuan per 500g (about $1.50/lb). With such high costs, producers are not inclined to comply with the rules. 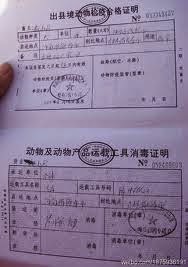 Certificates for dogs leaving a county
and disinfection of truck

China Youth Daily raised concerns that vendors at the Yulin dog meat festival either failed to display the required certificates or had a single certificate for hundreds of dogs. Many are butchered on the spot by vendors. 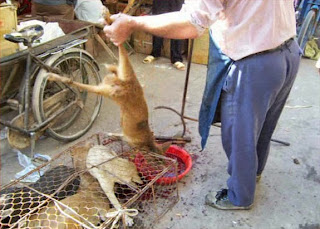 dog slaughtered on the street.
A Beijing Evening News journalist investigating the Yulin dog meat industry found an extensive supplier network. Some dogs came from villages in Yunnan, Shaanxi and Hubei Provinces where dealers go door to door buying them. Truckloads of dogs are inspected by animal health officials in the municipality where they are procured, certificates are issued, the truck is photographed and disinfected and sent on its way.

The three certificates required by MOA are issued by authorities in production areas. When a truck loaded with dogs arrives in Yulin, officials there check it again and release the dogs for sale in markets or to restaurants if no problems are found. Authorities in Yulin wait by the highway (probably at the toll booth) to check trucks as they arrive. They claimed to have turned away two trucks that were not compliant. In the Yulin wholesale market, the reporter saw certificates issued by animal health bureaus in Mengzi City, Yunnan and Weinan City in Shaanxi on display. 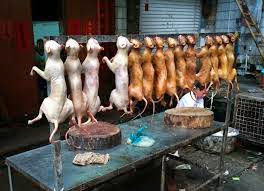 Officials also have to supervise the marketing of dogs from the area surrounding Yulin where an estimated 400,000 dogs are raised for meat. Officials say some people steal dogs, but most are raised by villagers. In one village house, he saw 3 or 4 rooms filled with dogs. Local officials acknowledge that the Yulin area has a high incidence of rabies, and there are about 100 deaths from dog bites each year. Animal health officials say rural people don't know they should get treated after a dog bite. They say rabies is not transmitted by eating meat of infected animals.

One official in Yulin estimates that 200 dogs are consumed per day in the area, but it goes up to 2000 per day during the peak summer months when the festival is held. It's estimated that 400,000 dogs are raised for meat in the area around Yulin. With three certificates per dog--as required by MOA's rule--that would be 1.2 million certificates to keep track of.

Dogs from outside Yulin are supposed to be slaughtered in one of eight local slaughter facilities. These are said to be overseen by three groups of inspectors who go out to check them daily.

Many people in China are now revolted by the dog meat industry, but there are many parts of China where dog meat is part of daily life and a source of income. There is no law banning dog meat. If such a law were to be introduced in China, how would it be accomplished? There is no mechanism for voting on a referendum. Nor is there a mechanism of voting in or out candidates that support or oppose dog meat consumption.

Regulating the dog meat trade is a challenge. Authorities have been struggling to regulate the major meat--pork. Establishing supervision for a relatively small industry like dog meat and closing all the loop holes is daunting.

These are some of the issues China is dealing with as it tries to transition from a collection of semi-autonomous city-states to a nation ruled by law.
Posted by dimsums at 10:24 PM