On November 25 Chinese authorities announced the beginning of "temporary reserve" purchases from the 2014 corn crop. As expected, the temporary reserve prices were held at the same level as last year. With China experiencing a corn glut for the third year in a row, the government is expected to purchase a large volume of corn again this year. With grain bins already full, the temporary reserve announcement included an exhortation to prevent "hidden threats" of mold and fire from destroying millions of tons of corn stored in thousands of rudimentary bins scattered across northeastern China.

China began the "temporary reserve" policy in 2008 to place a floor under market prices. Since then, authorities announced minimum prices for each of four northeastern provinces each year and promised to buy grain for government stockpiles when the market price falls below the minimum. The grain is stored until the price rebounds. Then it is sold back into the market. That's the theory, anyway. But the wheels came off this policy when supply increased more than officials thought possible and "rigid" growth in demand flat-lined after Xi Jinping's anti-corruption drive shut down official banqueting that pumped up Chinese meat and liquor consumption.

This year's reserve prices are:

Authorities began the 2014/15 temporary reserve purchase program November 25, and it will continue through April 30, 2015. The program operates only in the four northeastern provinces listed above. Grain can be purchased by depots operated by Sinograin, the government's grain reserve management corporation, or by depots commissioned by Sinograin. Purchases by two other state-owned enterprises were limited to 5 mmt for COFCO, and 1 mmt by Chinatex (less than previously rumored).

Desperate to maintain production incentives and rural income growth in a period of rapidly rising wages and costs, officials raised the corn support price each year from 2011 to 2013. The price in Jilin Province was raised from 1500 yuan/mt to 2240 yuan/mt from 2009 to 2013 and remains at that level this year. During 2011 and 2012 the market price exceeded the support price, and little corn was purchased by authorities. However, when market prices stopped rising government corn purchases ballooned to nearly 30 mmt during 2012/13 and 69 mmt during 2013/14. Some analysts predict that another 40-to-50-mmt will be purchased this year. 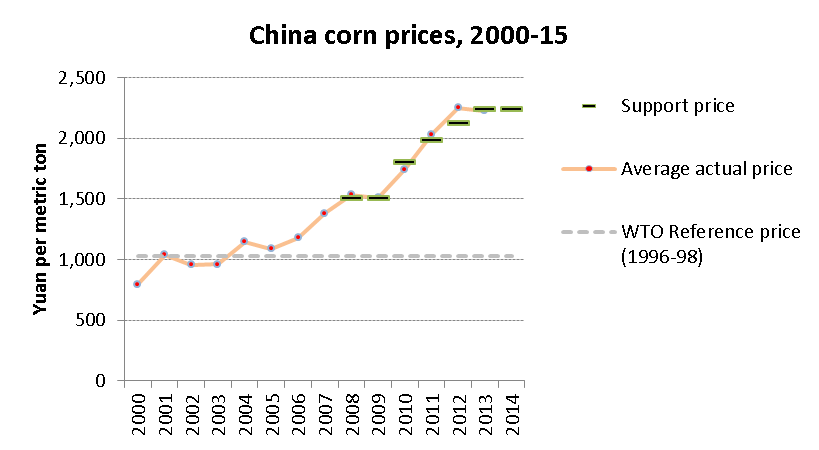 The practice of raising support prices every year was introduced in 2008 and repeated as received dogma in official meetings and speeches until 2013. At first it was applied to rice and wheat "minimum prices," but the practice was adopted for lower-priority commodities like corn too.

Chinese authorities were shaken up by the global grain price spike during 2007-08 and became convinced that commodity prices would rise forever. A book on food security published by the State Council's Development Research Center (DRC) think tank in November 2013 pronounced "we are in an era of high food prices," and chanted the mantra of raising prices annually. Officials became especially concerned about tight supplies of corn, an assessment reflected prominently in the "new" food security strategy put forward last year.

Chinese officials don't seem to have anticipated the possibility that corn prices might drop. In July 2013, the National Development and Reform Commission announced a 5-percent increase in the corn reserve price--four months earlier than usual. There was also some discussion of raising the priority of the corn price support from "temporary reserve" to "minimum price" so it would be equal in priority to rice and wheat.

The increase in the 2013 Chinese support price was announced when it was already obvious that corn prices would be under strong downward pressure. It was already clear that the U.S. and China would both have record harvests, and U.S. futures prices were already dropping. Indeed, the surge of output last fall put downward pressure on prices in both countries. Chinese authorities stockpiled corn in their "temporary reserve" to prevent Chinese prices from falling.

Chinese and U.S. prices diverged in 2013 and the gap widened after another big  harvest in 2014, creating one of the biggest price distortions ever. While this year's temporary reserve prices are unchanged from 2013/14, they are more than double the current U.S. gulf fob price of about $4.56 per bushel. Chinese authorities began rejecting the first of 1.25-mmt of U.S. corn shipments the same week the 2013/14 temporary reserve purchase program was begun. 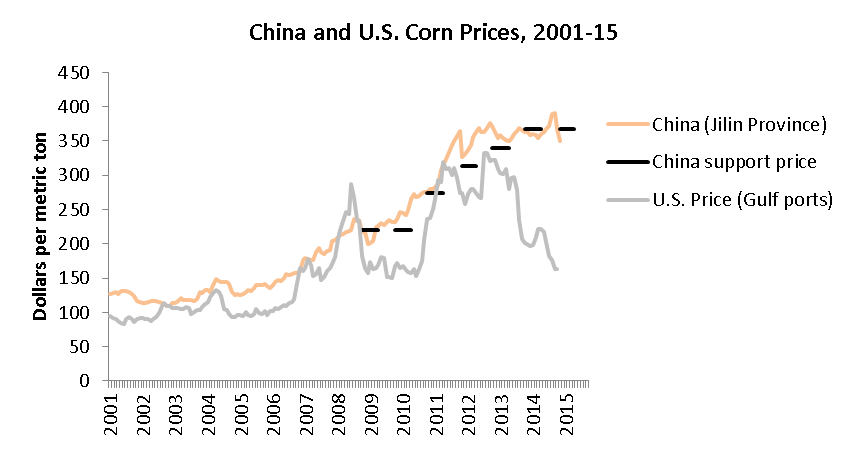 By June of 2014, authorities in Beijing were worried that grain reserves were at a record-high level--they said 100 million tons--and there was no space to store the 2014 harvest--another big one. That month, the director of the Jilin Province Grain Bureau said 70 percent of the province's reserves were stored in temporary bins or sheds, and he expected that more makeshift bins would be needed to hold the 2014 harvest. The situation was probably worse in Heilongjiang. In May, authorities began frantically holding weekly auctions of corn to clear out space for this fall's harvest. Much of the corn offered failed to sell, however. 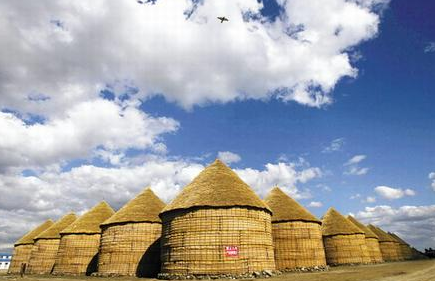 Much of China's "temporary reserve" of corn is stored in temporary bins made of thatched straw on a circular base of stones. Thatched mats are wound around to make the sides of a cylinder. The grain is poured in, and a thatched roof is added. The Jilin grain bureau director estimated that his province would need 70,000 temporary storage structures. 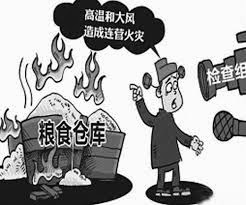 A fire at a granary in Heilongjiang in June 2013 destroyed nearly 20,000 tons of corn and got a lot of public attention. This comic skewers the explanation for the fire given by the managers of the grain depot. The man in a traditional mandarin's costume tells the "inspection team's" camera that the granary fire was caused by "high temperatures and wind." 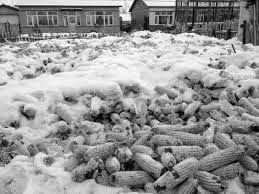 This corn in a Heilongjiang farmer's courtyard in January 2014 was covered by snow and was too moldy to sell to the government reserve. Nevertheless, large volumes of corn in the reserve granaries was also moldy. Large volumes of corn from Heilongjiang offered for auction this summer failed to sell. This year's government document on the temporary reserve emphasizes that grain must be dried and meet standards before it can be sold to the reserve.

In addition to all these problems, China's practice of raising price supports every year was bound to  violate its WTO commitment to limit domestic support to 8.5 percent of the value of production. WTO practice is to measure the value of price-support by calculating the difference between the support price and a fixed historical reference price--in China's case the reference is the average from 1996-98. So, if you raise the price support every year, the difference between the support and reference prices will automatically grow. The price support is now more than double the WTO reference price, or about 1200 yuan per metric ton (see first chart above). This works out to about 17 percent of the value of production using a conservative assumption that the 69-mmt purchased for the temporary reserve during 2013/14 is considered "eligible" for the program. That's double the 8.5-percent ceiling on domestic support.

Like many of China's policies, this one works well when all prices are going in the same direction. But the wheels come off when prices start falling. The decline in corn prices seems to have caught the Beijing policy makers off guard. The Development Research Center was alarmed to find that China had fallen below 90 percent self-sufficiency in 2012 and that corn imports had surged. They began to fret about an inevitable increase in corn imports. A new 400-page book by DRC policy wonks (China: Food Security and Agricultural Going Out Strategy Research) spends most of its 400 pages talking about China's need to import corn. It was released in September--two months ago, when it was clear that China had what is probably the biggest corn glut in history.

Officials in China recognize that the price support has hit a ceiling. In October 2013, a National Development and Reform official again chanted the mantra, "Agricultural commodity prices must keep rising to compensate farmers for rising costs and to increase their income," but he went on to note that "...the domestic grain price is now higher than the international market price, so there is little room for prices to rise further." Since then, the soybean, cotton, rapeseed, wheat, and corn prices have all been held at their previous year's level and this year they are experimenting with target price subsidies for soybeans and cotton.

Authorities would like to transition to a target price subsidy for corn, but it looks like the temporary reserve policy for corn will be in place for at least a year and probably two. How long can the corn price remain stuck between the floor and the ceiling?