The Chinese public's angst about genetically modified foods has been evident in the country's news media over the past couple of weeks.

Two stars of China's national badminton team have been accused by lawyers of misleading consumers by their endorsements of a cooking oil brand that is made from genetically modified oilseeds. An attorney in Kunming is leading a series of legal actions brought against five major vegetable oil brands, accusing them of failing to comply with China's regulations that require labeling food products containing genetically modified organisms (GMOs). The main complaint is that labels are too small, illegible, or missing entirely. This purportedly deprives consumers of their "right to know" and prevents them from making informed choices.

The badminton stars--a husband and wife team--are accused of giving consumers misleading information. The Kunming attorney complains that the athletes endorsed a well-known brand of cooking oil as "the choice of a champion family." The attorney claimed that national team athletes are not permitted to consume GM foods. Therefore they were misleading consumers and "must be held accountable to the public." The athletes responded, saying that there is no difference in health or nutritional effects of GM vegetable oil and there is no rule forbidding athletes from consuming GMO foods. 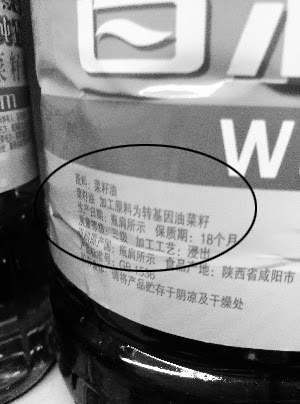 Label on cooking oil manufactured in Weiyang, Shaanxi Province:
"processing ingredients are genetically modified rapeseed." Is it too small?﻿

An opinion column in the Beijing Youth News supports the lawsuit's contention, noting that labels describing GMO content are small, obscure, or absent, while non-GMO logos are displayed prominently on bottles of vegetable oil. The Beijing Youth column supports a revision of the GMO-labeling regulation, but its argument demonstrates the impossibility of requiring labeling of a product containing GMO material. The writer notes that no packages of rice have GMO labels, but tests have detected GMO material in rice sold in supermarkets and rice cakes exported to Europe. He observes that rice mills do not have the equipment to test for GMO material, so there's no way they can place a label attesting to their products' lack of GMO content.

The Beijing Youth writer seems to be unaware that no GMO rice has been approved for commercial production or sale in China. So should rice mills be required to test all the rice they process to detect any illegally-grown GMO rice and place a label on their package if they find it? Should processors of rice cakes be required to test for the half-dozen or more types of potential GMO material in all the flour they receive? Genetically modified vegetable oil is used in thousands of processed food products--will they all have to display labels? Will restaurants have to display signs indicating that their food is cooked with genetically modified oil?

A Lanzhou Morning News reporter went to local markets to see how GMO worries are affecting local consumers' shopping habits. Consumers now often ask store attendants whether various foods contain GMOs. A supermarket had a special shelf where GMO food products were kept separate from other items--nearly all products were vegetable oil made from soybeans or rapeseeds. The reporter noted that few other items had GMO labels (apparently unaware that there are only a few minor GMO food crops approved for sale in China.) He seemed alarmed that vendors in a market had GMO and non-GMO oils for sale side by side on their counters. The complaint about poor labeling was repeated. One gentleman said that labels should more clearly state GMO content so that consumers will know what they are buying. Another shopper told the reporter she hoped the print on the label could be made bigger, because "we're getting older and can't see too well."

GMO worries are showing up in all kinds of strange news stories, some almost certainly planted with ulterior motives. An article about a poll of Shanghai citizens carried a headline announcing that 80% of people worry about GMO vegetable oil. But the article's main point was that the top worries of Shanghai citizens are unemployment, inflation and getting stuck in a subway train. Respondents also said they were worried about food safety, especially new types of food, but fear of GMOs was a minor point in the story.

Another story from Lanzhou appears to be planted to ease GMO panic. A lady discovered that potatoes she bought failed to turn black after several days like they usually do. She purportedly called the newspaper's in alarm to ask whether the potatoes were GMO. The article then reported a scientist's long explanation of why potatoes turn black and explained that storage conditions and weather can affect the process. It doesn't mean the potatoes of genetically modified, readers were told.

A story from Harbin in Heilongjiang Province reports that parents of kids at a primary school flew into a panic because they suspected that school lunches were cooked with genetically modified vegetable oil. The parents reportedly gathered outside the gate of the school and were taken to inspect the factory that supplies the school lunch. There, an astute parent discovered genetically modified cooking oil from a major company based in Heilongjiang. The cooking oil was perfectly legal, but the local food and drug supervision authority advised the company to switch to non-GM oil to satisfy the parents. This story seems fishy--there's a good chance it was concocted by the province's local soybean industry to stoke opposition to imported GMO soybeans. 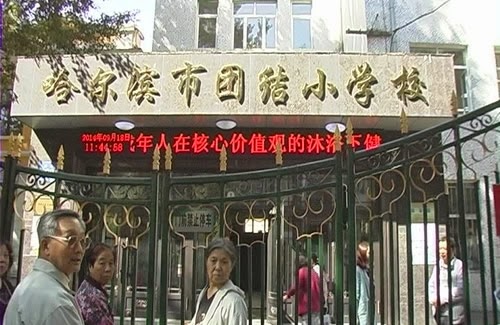 Primary school in Harbin where parents reportedly protested use of GMO cooking oil.

Genetic modification is probably one of the least of China's food safety problems. Will rice and wheat have to carry labels showing that it was grown in soil polluted with cadmium or lead? Will fish have a label indicating that it spent its entire life pumping polluted water through its body? Will vegetables have a label warning consumers they were exposed to smog?

Labeling possible hazards in food is impossible. Labeling a food as non-GMO is more realistic than requiring sellers to declare any possible GMO that might be in a food product. To deal with other food safety hazards, Chinese agricultural officials have pursued the opposite approach: labeling foods that are free of hazards. This began with the "green food" program in the early 1990s which labeled food that was grown in places free of soil, water, and air pollution and without toxic chemicals (it was originally an assurance to overseas customers). This approach was extended to a "non-polluted" ag product certification program in 2003.

An article published in 2011 tried to dispel rumors that genetically modified cooking oil would make Chinese men sterile by exhorting the public to "trust the government, trust science." This is precisely the problem. A population that was mainly engaged in subsistence farming a generation ago, still clings to folk traditions, has only passing familiarity with experimental science and has routinely been hoodwinked by government officials has no faith in either science or government.

Industry and political players taking advantage of a semi-informed public to stoke fears of GMOs in order to quash imports or promote foreign policy strategies are playing a dangerous game.
Posted by dimsums at 5:56 PM