China is Awash in Grain

Suddenly, China is awash in grain. There was so much grain in government reserves this spring, authorities worried that there wouldn't be room to store this fall's harvest. China's grain reserve corporation--Sinograin--set a goal of clearing out 32 million tons of grain by the end of October and began auctioning off grain at a furious pace in mid-May. They sold 30 mmt by the end of August. 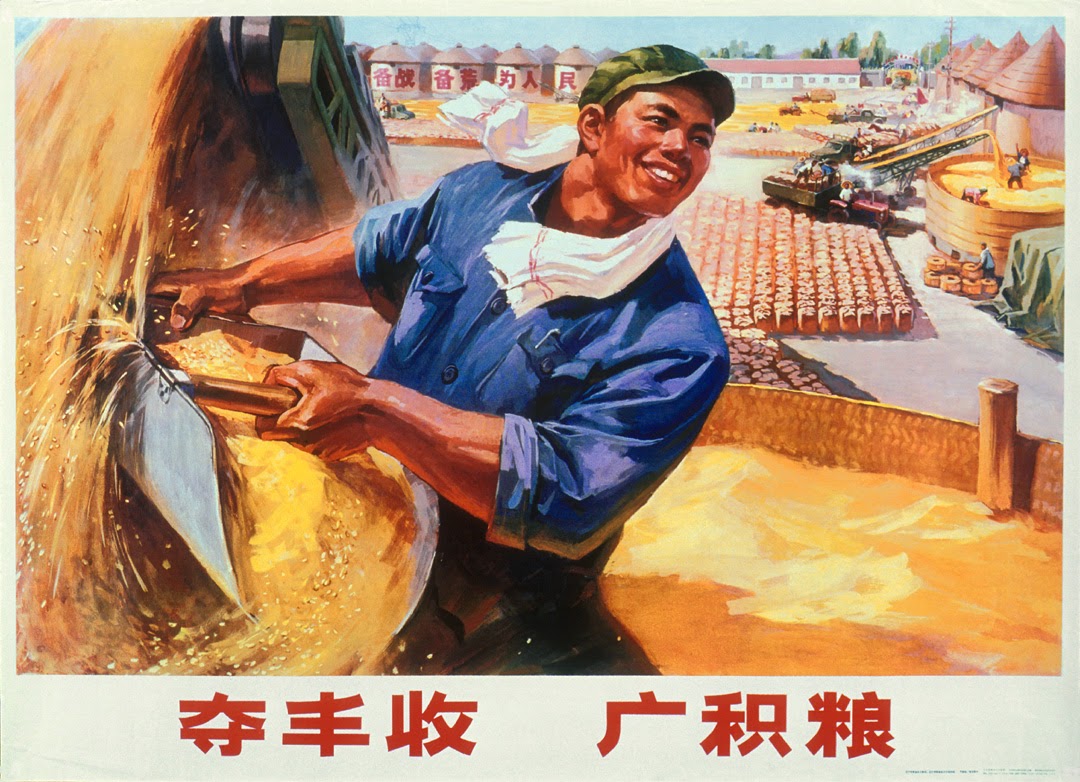 This 1970s poster says, "Reap an abundant harvest; store grain everywhere."
﻿
China's grain production continued to soar over the past two years but demand slowed. With supply greater than demand, the market prices fell below the government's price floor. Authorities had to purchase large volumes of surplus grain to prevent prices from falling.

From November 2013 to April 2014, authorities purchased 70 million metric tons (mmt) of corn in northeastern provinces for its "temporary reserve." This was added to 35 mmt purchased in 2012/13 plus normal reserves held by the government.

Authorities purchased 25 mmt of winter wheat from the May-June 2014 harvest--three times the amount purchased in 2013. The total purchased by all types of buyers soared 41 percent from 2012 to near 70 mmt. China's wheat market now is said to have "three highs": "high prices, high government purchases, and high inventories." 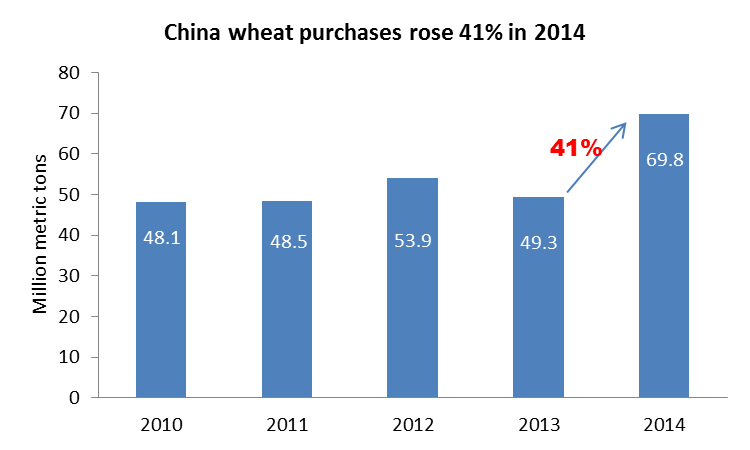 There is also a surplus of rice. Officials worried that there wouldn't be room to store the early rice crop harvested in July. They purchased 2.6 mmt to support prices.

In a Peoples Daily article Jiangxi Province officials explained the strategy for coping with the flood of grain: "auction, sell, move, repair, build, and rent." Officials have been holding weekly auctions of grain reserves since May and had auctioned 30 mmt by mid-August and they have stepped up sales of old grain in their "rotation" plans. Officials are requisitioning rail cars and coordinating the movement of grain to provinces that have a deficit. Old, dilapidated granaries are being repaired and they are renting storage from privately-owned depots and processors. Allocation of central government funds has been expedited to meet targets for new grain storage this year and next year.

Sinograin incurred losses of 560 million yuan ($90 million) during January-June as it cleared out its stockpiled grain. The Peoples Daily article reports that prices are seriously out of whack: milled rice prices are less than paddy rice prices, new grain is cheaper than old grain, prices in production areas are higher than in consuming areas. The large volume of grain purchased by the government is keeping prices artificially high. Prices of imported grains are lower, putting downward pressure on prices in coastal regions. For example, the CNF price imported U.S. wheat fell steadily after the harvest and is now below the Chinese support price. The current price of corn in northeastern Chinese ports for shipment to the south is $416, but the estimated cost of imported U.S. corn for arrival in October-November is $243. 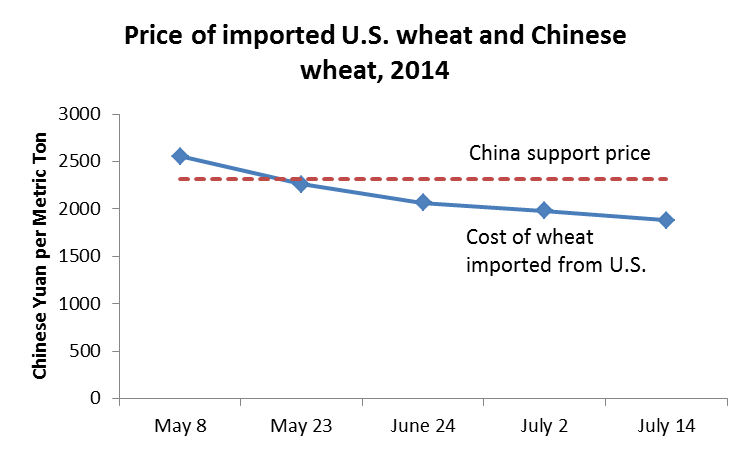 Source: China Grain and Oils Information Net.
Chinese farmers were said to be happy this summer after receiving payment for their wheat and early rice. Cost of production surveys conducted in Henan and Anhui Provinces this summer found that net returns to wheat growers were up about 20% this year despite increases in production costs. However, grain producers are being helped at the expense of rice and flour mills and livestock producers.

Another way to dispose of excess grain inventories: a fire at a Heilongjiang granary in May 2013 destroyed an estimated 34,000 tons of corn and 18,000 tons of rice. At the time, the fire was said to be an alarm bell on the risk of holding large grain reserves. The estimated loss of 100 million yuan was much less than the 560 million yuan lost this year by selling off old grain.
Posted by dimsums at 7:55 PM