A journalist's investigation of organic food products reveals the confusion and cheating that undermine confidence in "organic" foods that are now commonly on offer in Chinese supermarkets.

The journalist visited supermarkets, interviewed farmers, traders and regulators in Shandong and Guangxi and found that consumers have only a vague idea of what "organic" means, supermarket labels play fast and loose with "organic" labels, and fraud is common.

When the journalist asked twenty shoppers in a supermarket what "organic food" means, he received a variety of answers: "the package is marked organic," "the price is higher," "healthy, nutritious, without contamination." The journalist suggests that consumers' sketchy understanding of what organic means makes it hard to verify that foods really are organic. 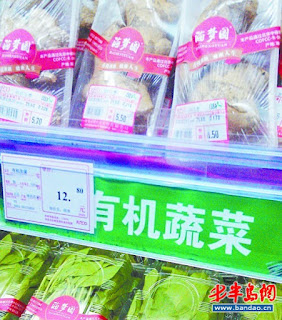 Sign on shelf says "organic vegetables" but no certification label on package.

Some foods have a sign indicating they are organic but they lack the required official logo or fail to identify who awarded the certification. The reporter looked up several supermarket items in a government "agricultural product certification database." The listing for a fungus on sale in Jinan showed that the certification had expired in 2010--two years ago. Two other products from a Guangxi supermarket could not be found in the database.

The dimsums blogger has observed this common pattern: there is a big campaign to introduce some new food safety measure but once the measure is in place and attention wanes, no one maintains it.

The reporter consulted a broker who deals in organic food products who said the organic certification is in a state of confusion (see 2011 dimsums post on this topic). According to the broker, the two major certifiers--Huaxia and the Organic Food Development Center--are OK, but there are a host of smaller organizations and companies who offer to give you a certification within a month if you pay 20,000 to 30,000 yuan. If you pay the money, says the broker, the company will send someone to help fill out the application, take care of the documents and get you past the farm inspection.

The Chinese government's certification pyramid: "pollution free" (brown), "green food" (dull green), two organic certifications at the top (bright green). One is for the domestic market and one is for the foreign market.

The manager of an apparently reputable Shandong company producing organic vegetables said that his farm is certified by the Huaxia company associated with the Ministry of Agriculture. However, other people regularly call him offering to get him an organic certification within a month for a small fee.

The reporter spoke over the phone with an individual in Shanghai who offered to print up "organic," "green food" labels or organic certificates "according to requirements of the customer" for fees that varied from less than 1 yuan to hundreds of yuan.

Feicheng County in Shandong has a dozen or more organic vegetable producers and 178,000 mu of organic production area. The reporter visited farms there and saw that they use organic fertilizer, special lights and plastic strips to control insects. A farmer calls organic vegetables "gold" that has gotten quite a few farmers rich.

However, a producer in Guangxi explains that the cost of his greens are several times higher than costs of conventional vegetables. He has to spend 7000 yuan per mu for labor, fertilizer, pest control and certification fees.

As in other industries, high prices and profits from organic foods attract fakes and frauds. The broker said some companies stick fraudulent labels on common food.

Once certified, farmers are rarely checked. Knowing this, the temptation to use prohibited fertilizer and pesticides to boost production is strong. 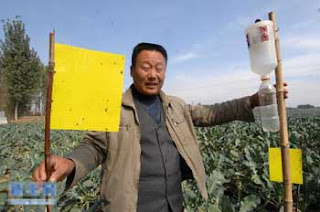 The vice director of the agricultural bureau in Feicheng County of Shandong points out another common problem in China--the fragmentation of regulators. Agriculture departments oversee production, the accreditation commission is in charge of certifiers, the industrial and commercial bureau is in charge of transportation and marketing, the health department oversees food service. No one worries about anything beyond their own purview and no one oversees the whole process of producing, distributing, and certifying organic food.
Posted by dimsums at 5:16 PM

So it seems that like here in America China needs to focus on local food networks and consumers need to have a relationship or at least an awareness with the farms their food is coming from. While organic foods do not face the same level of fraud in America I see the problems as similar because organic certification does not solve that much when we are talking about sustainability and large organic companies are still using up plenty of oil.