China on the Road to High-Tech Agriculture

On July 20-21 Chinese agricultural officials from all over the country assembled in Jiamusi, Heilongjiang Province, to hear Vice Premier Hui Liangyu give a speech urging them to push forward with "agricultural modernization." The speech seems to be a signal that China is moving toward high-tech capital-intensive agriculture. This was reinforced by the post-meeting visit to the nearby high-tech "Friendship Farm" where huge fields are tended by airplanes, helicopters and massive tractors.

Chinese officials have been talking about "modernizing agriculture" since the 1980s when Deng Xiaoping proclaimed the mantra of "four modernizations" to guide the country post-Mao. The idea was to get away from ideological excesses that produced the disastrous cultural revolution and great leap forward to an era of pragmatism in which technological improvement would replace ideological purity. The rhetoric in Chinese documents hasn't changed that much since the 1980s. What has changed is that China now has money--lots of it--and the problem of massive rural underemployment has now eased after a decade of rapid outmigration that has drained the youth from the countryside. 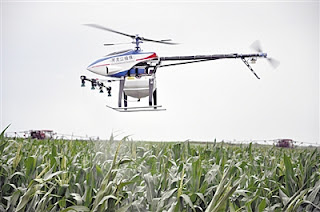 A helicopter that sprays pesticides is demonstrated
on the "Friendship Farm" after the modernization meeting.

Hui's speech stressed that the country is in a key period where it is accelerating the transformation of traditional agriculture. The modernization of agriculture with Chinese characteristics includes upgrading infrastructure, building teams of agricultural personnel with scientific knowledge, adopting a modern management system, and improving the policy system. The "management system" is code for inducing villagers to rent out their land to be operated as a large-scale farm. A key measure is investment in high-tech agricultural demonstration districts like the Friendship Farm. The speech follows similar rhetoric about transforming the mode of production in the 12th five-year plan and orders to develop modern agriculture demonstration districts in the "No. 1 Document" this year.

The new mode of agriculture takes money, so the same day as Hui's speech the China Development Bank, Ministry of Agriculture, and Heilongjiang Provincial Government signed an agreement to jointly push forward modern agriculture. The three parties pledged to pursue large-scale, "green," efficient farming in Heilongjiang by boosting provincial government subsidies and expanding bank loans and other financing to 60 billion yuan by 2015. It will create 50 million mu of drought-resistant fields, raise mechanization to 92.5%, and boost agricultural processing
Posted by dimsums at 8:48 PM