Pesticides in the Supermarket

An article that appeared in the Chongqing Evening News last September reports the story of Mr. Chen who found a bottle of toxic pesticide mixed in with his rice. The story provides an example of the combination of ignorance, minimal regulation, and callous disregard for other peoples' welfare that creates China's severe food safety problems.

Mr. Chen bought a 10-jin bag of rice at the supermarket, brought it home, and as he was preparing dinner, his child noticed a small plastic bottle in the bag. The child exclaimed, "There's a bottle in the rice!" 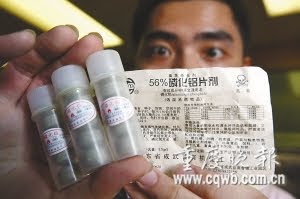 The bottle was about the width of a finger and contained a powder. It had a tiny hole drilled in the side. Mr. Chen picked up the bottle, and it gave off a strong odor. He examined the label and found that it was a highly toxic pesticide called aluminum phosphide. The label said it was forbidden for home use. As he thought about it, Mr. Chen became more nervous, recalling many other bags of rice containing bottles that he nonchalantly set aside.

He took the bottle to the supermarket and confronted the manager. "You sold me rice that was contaminated with pesticide!" Mr. Li, the manager, impatiently explained that the bottle was there to kill insects.

The reporter went to the supermarket to investigate. Mr. Li, taking a bottle from a package of beans, said, "See, this is the bottle he (pointing at Chen) brought back." Immediately, the air was filled with a strange odor. A small hole had been drilled in the side of the bottle, letting the pesticide escape.

Mr. Li said he has sold bags of rice for 3-4 years and could not find a way to prevent pests from infesting the rice during hot weather. Last year, someone told him aluminum phosphide is good for killing insects, so he bought some at a pesticide shop at one yuan per bottle. It was in small tablets and looked like calcium. He explained the hole in the bottle is to let the pesticide disperse when it becomes moist.

Li initially didn’t believe it was toxic. But after checking on the Internet he found that aluminum phosphide emits a colorless, odorless gas when it becomes wet. His expression stiffened, “I don’t dare use this stuff to kill insects any more.”

Later that afternoon, at a shop that sells seeds and fertilizer, the shelves were loaded with cartons of aluminum phosphide. The manager said it has been produced as a pesticide for several decades. It is often used after harvest as an insecticide on dried corn and rice. It is highly toxic, but anybody can buy and use it.

According to Mr. Li, the supermarket manager, many rice-sellers use this method to kill insects. This was confirmed by visits to three other supermarkets. One manager thinks the discovery of the supermarket’s method by customers is “hard luck.”

According to a manager of another supermarket on the fourth ring road, ”Initially, some people wrapped the aluminum phosphide in a cloth and put it in the rice. Now, many think this is too much trouble. They simply put a hole in the pesticide bottle.”

How can you not know aluminum phosphide is toxic? This manager answered: "1 kuai can keep bugs out of 3,000-4,000 jin of rice and the people who buy it don’t die on the spot. Add some plastic powder to rice noodles, use black dye to create 'black' rice… in this society to do business you don’t think about these distorted ideas, you make money however you can."

The reporter went to a New Century supermarket outlet where there were many kinds of rice, flour, and beans. There was no sign of insecticide in the bins or on counters. How do they control insects? The manager responded: “Our store has never considered pest control in grain and oil products!” The manager explained, each batch of rice and beans is on the shelf no more than four days before being sold out. We have good indoor ventilation and the temperature is kept at 26 degrees, so insects don’t become a problem in the store. If insects are found in rice coming from the warehouse, we return the product intact. We don’t put it up for sale.

Then the reporter went to the rice shop at White Horse market, one of the biggest markets in the city. There were over thirty 25-kg bags of rice stacked up, and there were several tobacco leaves and some garlic between every two rice bags. The boss explained, "Tobacco leaves and garlic are our insecticides! This local method is often used. We have sold rice for over 3 years, and everyone knows I don’t use chemical insecticides."

Next, the reporter went to the Panxi wholesale market. In a rice shop there, the reporter pretended to need something to kill insects. The boss told the reporter, "There's a stall that sells pesticides next to the public toilets in the market--that’s where we buy them—=they’re really effective!" The reporter asked how to use pesticides to kill insects, and the response was, "The owner of that stall can tell you how to use them. Do as she says and you can’t go wrong!"

The reporter went to that stall where an old lady handed over a bottle containing four aluminum phosphide tablets. Each bottle’s label has a picture of a skull and crossbones and a warning that says "highly toxic."

The reporter asked: “I have 1000 kg of rice, how many bottles should I use?” The old lady replied, “Use at least 10 bottles and that will do it! One yuan for each bottle.” The reporter found directions for use on the bottle-—“grain and seed fumigation, use one tablet for each 75-150 kg.” Ten bottles are far more than recommended. The reporter suggested this to the lady, who said, “There are many people in the wholesale market buying this insecticide from me. So far, nothing ever happened. The tablets are not expensive and using more is more effective!”

Mr. Zhou, the director of the Chongqing agricultural extension and testing station, explained that “56% aluminum phosphide tablets” are a common insecticide used in crop fumigation, mainly for killing insects in grain and seed at warehouses. There are strict standards for using it: one tablet for each 75-150 kg of grain or seed. The tablet should be wrapped in gauze, placed 20-30 cm inside the grain in a sealed container for 7 days or more. After fumigation, the grain should be removed from the container, exposed to air for five days or more and only then sent to the market.”

Excessive use can leave residues on food which can be toxic. It can release a toxic gas when wet. Breathing in 0.14 grams can be fatal. Director Zhou said aluminum phosphide tablets cannot be used indoors. Humans and animals must not be present when the pesticide is being used. There must be no fire or smoke in areas where it is stored since it emits a highly flammable gas. After using, one must wash face and hands. If it catches fire, water cannot be used; sand must be used to put it out.

In October 2008, a 24-year-old young man in Sichuan died in his sleep from poison gas when aluminum phosphide was used in a medicinal herb warehouse where he worked. He was found dead on his bed, his face turned pale. Two years ago, in the suburbs of Xi’an, seven people were poisoned by gas that escaped when a medicinal herb trader used aluminum phosphide to kill insects. Fortunately, the folks in Xi'an were rescued.

A perusal of web sites shows that aluminum phosphide is indeed a highly toxic chemical that is used a grain fumigant or rodent poison. In the United States it may only be purchased by certified applicators. According to Wikipedia, a wealthy British gentleman used it to commit suicide in 2002. The hospital ward had to be evacuated because his body was giving off toxic fumes. In 2009, two children died in Saudi Arabia when they breathed in fumes from the house next door that was being fumigated.
Posted by dimsums at 10:11 PM